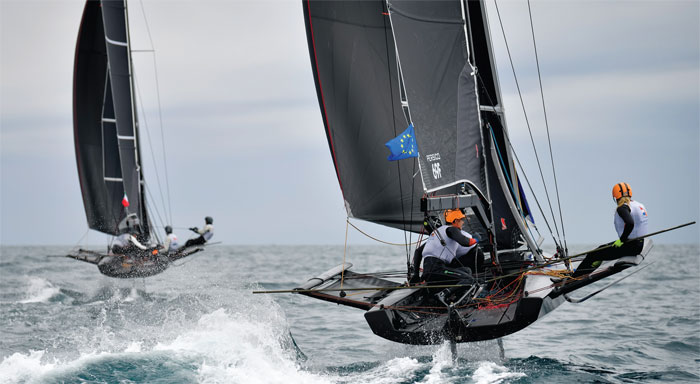 With Persico standing behind these carefully tested one design foilers and Santi Lange standing behind training up their young crews, grand prix foiling really did just get much more accessible

The 69F Youth Foiling Gold Cup creates a pathway for young sailors who aspire one day to race in the America’s Cup. While the AC75s look like they’ve splashed down from another planet, the Persico 69F is an accessible, affordable three-person foiler that helps to bridge that huge technology and performance gap.

The Youth Foiling Gold Cup is aimed at under-25 sailors who want to step up to the challenges of highspeed foiling, and it takes place over four events during 2021 which conclude with Cagliari, Sardinia in early November. However, the YFGC is only one part of a much bigger project.

More than just a foiling boat
Even if you have no America’s Cup aspirations for but just want to fly safely above the water, the Persico 69F might still be for you. It’s not just a 6.9-metre foiler, it’s a one-design class with a fully formed training and racing programme, and it embraces a lifestyle that goes beyond pure racing or sailing the boat itself, as Enrico Tettamanti, chief executive of Coming Solutions (the company behind the 69F) explains: ‘This is a collaboration of sailors, designers, managers and marketers who hold a shared vision of hydrofoil sailing and its place in the professional sporting arena as well as for keen part-time racers looking for ultimate thrills and great memories of flying across the water.’

Main picture: the Persico 69F is a three-man foiling dinghy that aims to bridge the enormous technology and performance gap between grassroots competitive sailing and professional grand prix racing

It all began with a conversation between two passionate Italians, Maciel “Cicho” Cicchetti and Daniele “Dede” De Luca who, in contact with Nahuel Wilson and Laureano Marquinez, the Argentine designers of the boat, immediately understood potential of this revolutionary craft.

Having been involved in several AC cycles, the Wilson-Marquinez studio developed a concept that looks to combine high performance but with a much safer and more predictable ride than is associated with most forms of sail-powered hydrofoiling.

Cicchetti and De Luca brought in other expertise from the sailing world: Giorgio Benussi, Pierluigi Bresciani and Umberto De Luca. The structure of the company was integrated by Carlo Tomelleri and Studio Casti, which oversees the promotion of the 69F brand. 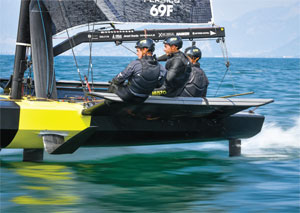 Above: the boat is suitable both for professional use and for high and medium level sportsboat sailors who want to take a step into the monohull foiling world.
Below: Youth Foiling Gold Cup racing on Lake Garda, where the academy, organized by 69F, has its training base in the town of Malcesine 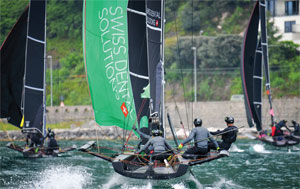 Nine months of testing
The 69F team knew there would be no second chances in terms of getting the product right. The pioneering days of hydrofoiling inevitably bring more failure than success as designers and sailors learn what is possible, and what is not. Many foilers have come and gone as they have proven either too fragile or too temperamental and unpredictable. Some have been downright dangerous.

To make sure the Persico 69F achieved or exceeded expectations, it was put through a rigorous and extensive R&D process that involved a number of the world’s best highperformance sailors who took part in the testing. Sailors such as Rio 2016 Olympic Champion Santiago Lange, three-time Moth World Champion Paul Goodison, and Prada Cup winner Checco Bruni.

Once the prototype had been fully tested and proven, the series production was then entrusted to Persico Marine, one of the best known boatbuilders in the sailing world, with well-documented success in the America’s Cup, the Volvo Ocean Race, the TP52 circuit and many more besides.

Within every sailor’s reach
At 6.90m, the Persico 69F is a small, very light yet stable design that bears some similarity in shape and size with a planing sportsboat, except that this is a sportsboat that lifts clear of the water and flies at speeds in excess of 30kts.

With a crew of three, the boat has racks rather than trapezes for easier manoeuvres and safer boat handling, V-shaped lifting foils and a T-shaped rudder, and 40sqm (78sqm downwind) of sail to propel only 350kg of boat weight plus another 270kg of crew.

The boat is suitable both for professional use and for high and medium level sportsboat sailors who want to take a step into the monohull foiling world in the easiest and safest way possible. While the boat requires high levels of strength, fitness and agility for getting the best from the Persico 69F’s performance, simply getting foiling and moving at speeds in excess of 20 knots is very straightforward and achievable within a few minutes for nonprofessional sailors of even average ability and fitness.

Racing for youth and seniors
The 69F team has formed a sailing academy suitable for sailors at all levels, with the aim of equipping participants with the knowledge to foil safely and confidently in the shortest possible time. There are two race formats:

The academy
Devised by one of the most famous and accomplished high-performance sailors in the world, Olympic gold medallist Santi Lange, the Academy is an unmatched opportunity for amateurs to learn foiling techniques from scratch.

There are a number of different packages to choose from, some linked to the Persico 69F Cup/ YFGC events or held at other times of the year. Packages can be bought for one day, three days or for a weekly “pass” and include lessons at sea, classes on theory and techniques. Santi Lange’s techniques have been documented and are taught by professional sailors and expert shore teams.

The Academy is located in Malcesine, on Lake Garda. It is open throughout the year, except during the Persico 69F Cup/ YFGC races and when the foiling Academy transfers to the host club of other 69F regattas, one week before the regatta.

On shore, Team 69F offers highquality hospitality and accompanying events to complete your experience in the future of sailing.

Why Santi Supports the 69F
Santi Lange is an Olympic medallist and naval architect from Argentina. ‘Sailing will have a great future if it develops in one specific direction, one of more fun, more technique, more speed, fewer rules and more immediacy. Sailing clubs should be open, more inclusive and respectful of the environment. These factors are what the 69F project embodies: the foiling monohull is the key to the future of sailing; my aim is to popularise it as much as possible.’


For more information on 69F sailing and competition visit https://69fsailing.com/
If you are a youth team and want to join the circuit, or want to join the Persico 69F Cup if you’re over 25, contact Francesco Rubagotti,

The prize purse will be distributed in the form of vouchers to participate in the 2022 season of the Persico 69F Cup, thereby rewarding the top sailors with continued access to high-level competition.

After competing in the 36th America’s Cup on American Magic, Maciel Cichetti believes that this kind of prize will help create a pathway for young sailors into the top end of the sport. ‘We want sailors to keep coming back to develop their foiling skills,’ he says, ‘and this prize format is the Persico 69F class’s way of reducing barriers to entry to top-level racing.’

While the first act has already taken place in Gaeta, there is still time to sign up for the third act in Cagliari. The six-boat fleet of foiling Persico 69Fs can accommodate up to 12 teams for the warm-up, qualifiers, knockouts and then the final rounds of racing. The shore team provides top-level technical support, so race teams only need to show up and sail.

A new sponsorship deal has enabled the class association to subsidise the race entry fees, lowering prices and making the racing even more accessible. The Persico 69F Class now offers the complete regatta experience, including boat charter and shore team services for 7,500 Euros for one event or 14,000 Euros if a team signs up for both remaining acts.

A Secure Future
As of June this year, the Italian entrepreneur Davide Serra bought a majority stake in the 69F project. Davide Serra, CEO and founder of Algebris Investments, has a clear vision for the brand, with the first big step to produce another “Six-Pack" (fleet of six boats) to bring the “made in Italy” 69F concept to the US. The aim is to set up base in Miami, Florida, and to launch the first competition in December 2021 as a 69F winter camp.

Serra has the same environmental commitment as the original 69F team. By recognising the extreme urgency of climate change and its challenges, his firm Algebris has committed to offset all its emissions since inception through an operation of reforestation.

Since 2019, Algebris has planted 52,000 trees and in 2020 the company launched the AlgeTrees project with a commitment to plant one million more trees in the coming years. This is being carried out in Tanzania, in collaboration with Hakuna Matata, a registered UK charity founded by Serra.