The same but (very) different 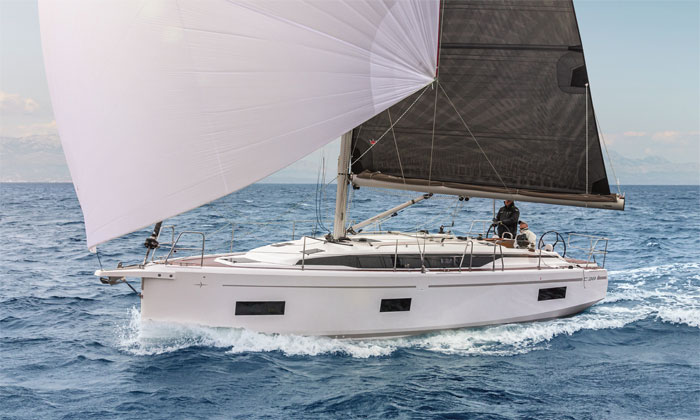 The new Bavaria C38 follows hard on the heels of the multiple award-winning and super-successful C42... but the design of Bavaria’s new slightly smaller model was far from being an exercise in scaling

The Bavaria C42 was a storming success and a turning point for the brand. Launched early last year (and reviewed in our April 2020 edition), it convincingly won the European Yacht Of The Year Award and then beat some strong contenders from the big French builders to win a major award on their home turf, Voile Magazine’s Boat Of The Year. The judges of both awards were surprised to discover that this competitively priced, production-built family cruiser could be so fast, responsive and rewarding to sail, while also offering a huge amount of internal volume. Voile Magazine’s verdict speaks volumes about that boat, comparing the feel of the helm and general sailing sensations with those of a far more expensive Italian or Scandinavian performance cruiser. With all that to live up to the bar was set very high indeed for the next model in the range, the Bavaria C38, launched last month at Venice Boat Show.

The Bavaria C38 is unlikely to win those awards, for the best possible reason – it’s far too similar to the C42, and equally good on the water. But maybe she will win other awards. Once again the first test reports enthuse about the same excellent sailing qualities, ample living space and value for money, expressing surprise that a yacht can at the same time be so easy and yet rewarding to sail. ‘The concept is the same but it’s not just scaled down,’ says Maurizio Cossutti, whose studio designed both boats. ‘The parameters change, interior weight and GRP weight are not scaled down in the same manner but we kept for example the same sail area to displacement and sail area to wetted surface ratios.’

Bavaria Yachts and Cossutti have clearly hit on a winning formula. Far from suffering a sophomore slump like the proverbial rock band producing its ‘difficult’ second album, this second generation of Cossutti Bavarias has surpassed almost everyone’s expectations. So what’s the secret? The talents of Cossutti and his design partner Alessandro Ganz are beyond any doubt; Bavaria’s boats have always been astutely positioned in the market and well-engineered; but there’s more to it than that. Intensely close collaboration between Cossutti’s team and Bavaria’s production managers, not just in the design loop and prototyping phase but throughout the process of putting new models into production, is what made the difference.

Main picture: this summer’s big launch from Bavaria is the Cossutti-designed C38 which follows the highly successful formula of last year’s multi-award winning C42. It marks a very welcome return to balanced hull forms in the production cruiser market and offers sailing sensations akin to a much more expensive Italian or Scandinavian performance cruiser

The sailing performance and helm response of these second-generation C-Line boats are partly down to a Cossutti innovation that solves a problem at one end of the boat by addressing it at the other end. Rather than relying on twin rudders to control the unbalanced hull form that inevitably results from the highvolume aft quarters that production cruisers are expected to have, Cossutti rebalanced the hull shape by adding extra buoyancy to the bow with a deep-V forefoot and put hard chines on the aft quarters in exactly the right position. The bow doesn’t dig in when the boat heels, so a single rudder stays fully immersed and the hull remains directionally stable, sitting on its leeward chine. And a single rudder is very useful for a family cruiser, making it much easier to manoeuvre in marinas with the benefit of prop wash.

But that’s only part of it. The other key performance-enhancing features are invisible and stem from the deep collaboration between Cossutti, Ganz and Udo Erbe, product manager for sailing boats at Bavaria Yachts. All aspects of both designs were conceived and developed with the constraints of efficient mass production foremost in mind, and the C-Line hulls are remarkably stiff as a result. ‘You really can feel it when you sail the boat,’ Cossutti says.

How is that stiffness achieved? ’Lamination is a very important part of it,’ Erbe explains. ‘We do it completely in house for all the big parts, hull, deck and liners.’ The sides of all bulkheads are laminated strongly to the hull and they slot into deep receiving sockets in the hull liners, which are filled with a vinylester-based structural bonding paste rather than the usual mastic. But while the production expert embraced the designer’s drive to stiffen up the boats with more internal lamination– which inevitably takes more time on the production line – he found other ways to speed things up. ‘The first C-Line boats were vacuum-infused but we realised that for mass production we are able to do it to a very high quality level in the standard way of wet lamination,’ Erbe says. ‘And here we are really experienced in the yard. We have to accept that wet lamination is a bit heavier but in mass production we always have to find the best compromise of quality, weight and cost.’ As well as saving time, Bavaria’s wet lamination produces a hull that’s only 200-300kg heavier than a vacuum-infused equivalent – a problem for a raceboat but not for a cruiser with good load-carrying ability and moderate displacement. Aren’t there a lot more voids in the GRP? Not really. ‘It is more challenging,’ Erbe says, ‘but we have a lot of experience in the lamination shop so we can achieve this goal with wet lamination.’

‘We also found that vacuum infusion produced so much more mess, and waste,’ says Bavaria’s Marcus Schlichting. ‘To save 300kg in a hull you produce a huge amount of pollution and when the boat’s in the water, two boxes of beer will kill the advantage of vacuum infusion.’ 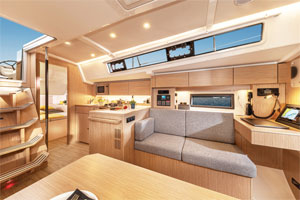 Above: the improvements in sailing performance and handling have been achieved without any reduction in the enormous interior volume that has long been a defining trait of the brand.
Below: the bulbous bow of the C38 doesn’t just improve the boat’s handling under sail by keeping the rudder immersed. It also creates a significantly more spacious forecabin. 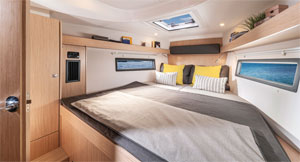 Another big efficiency gain was the decision to design both models concurrently, rather than one after the other, using as many of the same components and structures as possible. From a production point of view the Bavaria C38 and C42 are about 90 per cent exactly the same. ‘Everything is similar in production,’ Erbe says. ‘The way of routing the electrical harness and water pipes, the same positions for the tanks and so on – it makes sense to speed up production. The guys who work on the line, sometimes they really can’t tell if the boat they’re working on is a 38 or a 42 because the technical things are all so similar. That’s one of the main reasons why Bavaria is able to achieve such a good ratio of quality and price.’

The prototyping and pre-production processes have also speeded up significantly, so it now takes a lot less time to bring a new model to market. Previously, three prototypes would be made and then a lengthy process of optimising the build for the production line would commence. After that, a pre-series production run was needed to set goals and targets for quality, time and safety. ‘With the 42 and 38, people from the production line were invited to build the first prototype, then the second and third prototypes were actually built on the line,’ Schlichting says. ‘

Total build time for these boats is six to eight weeks, with six completed yachts (including two 42s and two 38s) coming off the C-Line production line every week. Demand is extremely strong at the time of writing and the order book is full for about the next ten months. Overall, the Bavaria factory is producing 16 motorboats and sailing yachts per week. 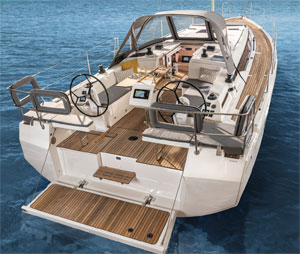 Above: the cockpit is designed for shorthanded cruising but it can also be worked effectively by a full crew

The key to all this efficiency is intense collaboration between Bavaria’s team and Cossutti’s. ‘The designer’s approach to a sailing boat often goes from outside to inside, looking first at the hull and getting it optimised for sailing, while our focus is from the inside first then going out,’ Erbe explains. ‘But with Maurizio we did both at once, working together on the integration of naval architecture, structural calculations, systems and interiors.’ Throughout this process the two boats were not just optimised for mass production but specifically designed to slot efficiently into Bavaria’s existing production line workflow.

‘When we presented the design of 42 for the first time we had already discussed and agreed basically half of the boat,’ Cossutti says. ‘And when we met in the yard for the first brainstorming session about the 38, after one week of focused work around the table we had checked everything from the design point of view to the routing of cables and pipes. By the end of the week we had a really precise definition of the boat. Then we just made the final drawings and sent them to production.’

It doesn’t usually work like that. ‘We normally have the yard or the customer asking to change things when we’re in the middle of the design stage so we have to go back and redo it,’ Cossuti says. ‘This time it was decided and settled – let’s go. It took a bit more time to design things but everything after that was much faster.’

The proof of the pudding is in the eating. ‘I sailed the 38 back in November,’ Schlichting says. It’s very easy to sail but if you’re an old racing guy like me you can sail it more than a knot faster. It’s not like stepping into a lorry when you know you can never drive fast, you can use it either as a Porsche or as an SUV. I’ve never had that on a sailing boat before.’