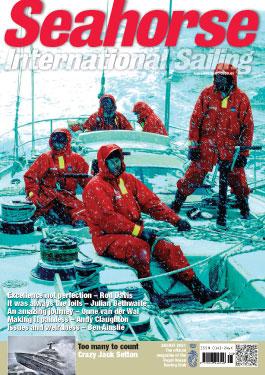 Clicks of chance
Not bad… CAROL CRONIN catches up with ONNE VAN DER WAL, the first onboard reporter and a Whitbread Round the World Race winner

Getting here
Turns out that it has always been the foils, not the hulls, not the sails, not even the trophies that have kept JULIAN BETHWAITE awake all these years

The best begat the best

Fast clothing – why not?

You cannot be serious!

On top of his brief

A career without end

Make your own rules

Push each other on

World news
A (very) careless Imoca, Fig 3s pass the (latest) test, the rapid new generation of Class40s fight it out (between them), why the Multi50s are finally looking sustainable, STEVE DASHEW wouldn’t but luckily there is someone else who will, the long fight back from the trauma of Beijing and a very classy Annapolis story begins a new chapter. THOMAS COVILLE, YOANN RICHOMME, CARLOS PICH, TOM SLINGSBY, DOBBS DAVIS, IVOR WILKINS, BLUE ROBINSON, PATRICE CARPENTIER, SAM GOODCHILD, LUKE BERRY

Rod Davis – Things I wish I’d known!
Move on from the pursuit of perfection, for one

RORC – Getting there
JEREMY WILTON

Seahorse build table – Innovation goes ‘wild’
Wild as in yachts plucked from nature, that is…

Sailor of the Month
And another face-off between the colonies, chaps