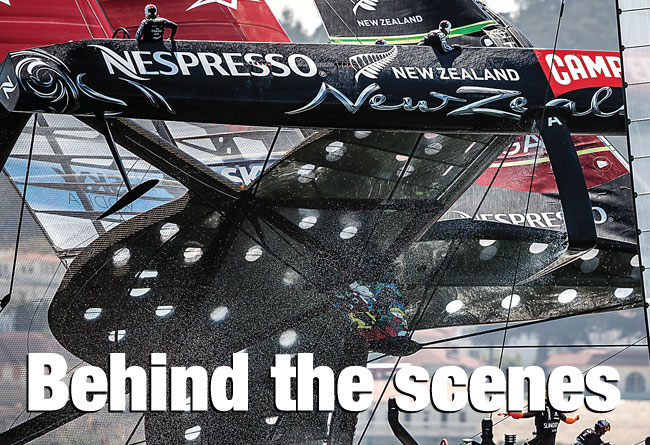 During the 34th America’s Cup the engineering team at Harken extended their already comprehensive involvement with the Cup by having a member of staff permanently embedded in the Defender camp. To learn more about the hydraulics and general engineering challenges posed by the flying 72s we caught up with some of Harken’s key people involved, notably grand prix co-ordinator Mark Wiss, head of engineering Steve Orlebeke, hydraulics chief Robbie Young and Harken USA CEO Bill Goggins

Seahorse: By way of initial background, what was the relevance to AC34 of previous work you may have undertaken for the big Oracle trimaran and the Alinghi 5 catamaran in 2010?

Team Harken: During the 2010 Cup we supplied both boats with winches and hardware. Then when they shifted to enginedriven hydraulic systems we also supplied some hydraulic equipment to Alinghi, but nothing to Oracle. In fact, we developed two nice hydraulic systems for Alinghi’s cata - maran; one of which was a small but fastacting hydraulic furler which was installed in the bowsprit. Sadly, they never actually raced with it as they took it off just before the Match during a big weight purge. But that was a very interesting piece of hydraulic equipment; the idea behind it being that whoever could furl the fastest for tacking or gybing could potentially win the race.

The other thing we supplied to Alinghi was a mainsheet system consisting of two extremely long cylinders that attached directly to the traveller car using a very short strop. That eliminated compression in the boom, putting all the load vertically at the end. It was a unique system which involved a lot of development and testing here before it even went onto the boat. Unfortunately a week before the first race they broke the boom anyway – it really was a very light section – and a consequence of going back to an older, heavier boom for the match was they could not use our twin-ram mainsheet arrangement.

SH: Were all the winches hydraulically powered in 2010?

TH: Yes, for both boats. And by the Match itself the hydraulics were all being powered by an engine.

SH: How would you describe your involvement with the teams this time…

TH: First to go back a little, Harken have been involved with the America’s Cup since the Swedish team in 1977 when we supplied some hardware. But things really got serious when Team New Zealand defeated Stars and Stripes in 1995, in San Diego. That was a pivotal moment for us because for the first time ever we not only had hardware but we also had the winch and pedestal systems, not only on the challenging New Zealand boat but also on Dennis Conner’s defending ‘mermaid’ boat. Since then we have had winches and hardware onboard the winners of every America’s Cup and Louis Vuitton Cup. What was unique going into this Cup is that while once again we supplied both Oracle and Team New Zealand with winches and hardware, this was the first time we have supplied the winning team with their hydraulic systems. Further, with the Oracle programme in the latest Cup our hydraulics involvement could be fairly described as total immersion; it was a fullon programme.