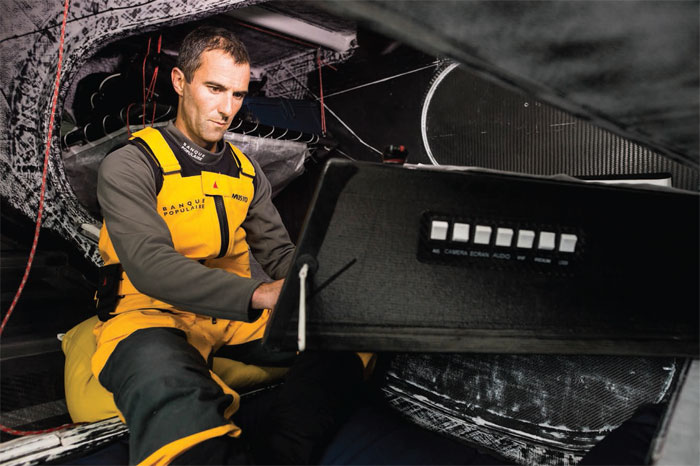 Choosing Musto for his sailing gear is one way that Armel Le Cléac'h can control his wild environment aboard the newly launched 105ft Ultim, Banque Populaire XI. After the breakup of his previous Ultim, Banque Populaire IX, following a collision with a UFO during the Route du Rhum 2018, the Frenchman is looking for all the certainty and predictability that he can muster. The continuation of a long relationship with Musto is one such example: ‘I have been working with Musto for over 10 years,’ says the 43-year-old who won the 2016-17 edition of the Vendée Globe. ‘I have done several Vendée Globe races and many transatlantic, ocean racing and other regattas wearing Musto clothing. This has always worked very well and has allowed me to have the right set of clothes for the weather conditions I have encountered.

‘At the end of each season we have a meeting with the Musto teams to debrief on the products used. We can find clothes with points of wear or technical elements that may have deteriorated. Some parts used on the Vendée Globe were sent back to the Musto technical department in England. Musto also regularly offers me the opportunity to try out new technical products in training at sea to see if they suit me.’

Main picture: Armel le Cléacʼh has now been wearing Musto waterproofs and working with Mustoʼs technical department to improve them for more than 10 years. Regular feedback from him and from other top solo ocean sailors is a very important part of Mustoʼs product design process

Conservative innovation is what Le Cléac'h is looking for. While for most of us the prospect of sailing singlehanded non-stop around the world in a 12 million euro semi-foiling trimaran would be considered anything but conservative, for Le Cléac'h the whole approach is of taking well-calculated risks. Le Cléac'h is all too aware of the many pitfalls of a high-speed circumnavigation. The recent Vendée was a litany of collisions with UFOs, and the painful loss of his Ultim in 2018 has dictated many of the design innovations in the new boat, recently launched from the CDK shipyard in Lorient. The new boat’s ability to withstand an impact with a UFO has been uppermost in the design brief. A sort of bumper has been mounted on the bow arm, with the aim of absorbing the worst of a sudden impact and preserving the structure of the bow arm itself.

While the new boat was in construction, Le Cléac'h once again confirmed his world-class offshore pedigree by going back to the Solitaire du Figaro and winning the 2020 edition of this gruelling circuit aboard the semi-foiling Beneteau Figaro 3. Along with victories in 2003 and 2010, that’s three victories on what many consider to be the toughest of all offshore competitions.

If the Figaro is the pinnacle of offshore competition, racing an Ultim is by far the more stressful occupation according to Le Cléac’h. ‘Life aboard an Ultim requires a great deal of concentration at all times. It's an immense pleasure to be able to sail these boats at 40-45 knots in flying mode, but it's very physical and mentally tiring. It's a demanding life onboard, as I imagine it would be for a Formula 1 driver.

‘The main and obvious difference is the speed of the boat. This requires much greater anticipation in an Ultim than in an Imoca or a more conventional boat. This speed totally changes the vision of distances and therefore also of the weather, the timings, the outside climate, etc. In an Ultim, in 24 hours you can cover 800-900 miles, whereas on a conventional boat you will cover 250 miles at best. If you leave Cowes in the morning at 8am in the direction of the Canaries, in an Ultim the next morning at the same time you will already be off the coast of Lisbon, whereas on your cruising yacht you will still be off the tip of Brittany.’ 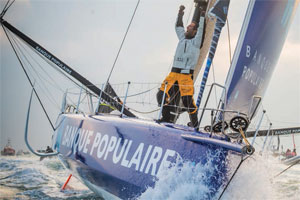 Above: Le Cléacʼh was first across the finish line of the 2016-17 Vendée Globe wearing Musto gloves, a Musto HPX Gore-tex Pro Series dry smock – his favourite piece of kit – and HPX trousers. Itʼs a versatile combination, popular with many top solo sailors.
Below: when venturing on deck in tough conditions, the Musto HPX Gore-Tex drysuit provides excellent protection with full freedom of movement 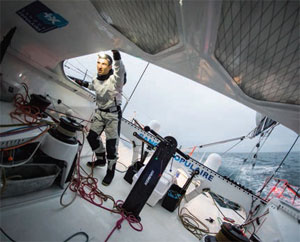 Comfort and sleep are difficult but vital ingredients for safety and ultimate success in any race or record attempt. ‘I can sleep between 15 and 45 minutes,’ says Le Cléac’h. ‘I sleep several times a day depending on the conditions of course. For this I have a timer with a loud alarm. I often use mental imagery to fall asleep, and before I go to sleep I set several alarms for potential dangers around the boat.’

When disaster can strike without warning, Le Cléac'h has to be ready at all times. ‘We have designed the living area of Banque Populaire XI so that I can be operational very quickly, especially when sailing solo. My rest area is less than two metres from the helm stations and the manoeuvring area. Depending on the weather conditions I adapt my outfit to rest. If the conditions are difficult I can sleep with my boots and my waterproof socks. Then I only need a few seconds to put on my Musto jacket or MPX smock. The MPX smock is my favourite piece of kit because it’s so light and works well across a range of conditions, but the Musto gloves are also a “must have” for me because my hands are quite fragile and they protect me well from rubbing. I also like to wear the first layer of fleece very often, which is very comfortable in all conditions.’

When things get dangerous, the survival suit is the protective layer of last resort. ‘We have two types of survival suit on board for extreme conditions. One is the compulsory survival suit from Cotten, model TPS, which is worn in case of extreme emergencies. The other is the Musto HPX [Gore-Tex] drysuit, which is suitable for sailing in difficult conditions. It allows you to stay really dry while still working hard.’

After shaking down the new boat and working out any bugs from the system over the coming weeks, the first big challenge for Le Cléac’h’s new steed is the Transat Jacques Vabre 2021. His co-pilot will be Kevin Escoffier, whose death-defying rescue from the stricken Imoca 60 PRB by Jean Le Cam in the recent Vendee Globe seems to have done nothing to deter him from going offshore again for extreme adventure. Then in 2022 it’s back to solo racing for the Route du Rhum and solo around the world in 2023.

The Transat Jacques Vabre this year starts in Le Havre France and finishes in Martinique in the Caribbean via the Brazilian archipelago of Trindade and Martin Vaz in the South Atlantic. But it won’t be long until the boat is looking at the solo around the world record which currently stands at 42 days 16 hours. Beating this time will mean achieving an average speed of more than 27.2 knots (31.3mph).

At this speed Le Cléac’h will have gone from northern France to the southern hemisphere within a week. Timing the start with a big weather system will see him heading out in his go-to gear for high-speed conditions: HPX Gore-tex Pro Series trousers and MPX Gore-tex Pro Series dry smock along with Gore-tex ocean racer boots. This setup combines the ruggedness of the HPX trouser with the versatility of the MPX dry smock and will keep Le Cléac’h fully protected when away from the protection of the cabin and performing optimally when battling the first few days of high speed in the high seas.

When he reaches the stable trade winds around Portugal/Morocco and he is settling into the lap, Le Cléac’h can feel more comfortable without the dry smock, and can now pair the HPX trousers with the Gore-tex middle layer blouson. Another tried and true pairing loved by many offshore sailors.

While the temperature is up around the equator, he can swap the HPX trousers for the LPX short, a waterproof and very breathable product that he has tested on the Figaro 3 and is taking on board the Ultim. This is combined with the Sunblock Dynamic top originally developed for Olympic sailors in Tokyo. With an ultraviolet protection factor (UPF) of 50 and active cooling properties, this long-sleeved shirt has been a clear favourite for Le Cléac’h to take offshore.

Before you know it Le Cléac’h will be in the Southern Ocean trying to keep the boat speed up by linking in with the notorious storms that circle the bottom of the globe. Holding onto one of these pressure systems and trying to sleep while the boat surges at up to 45kts will be a stressful experience. He could find himself sleeping in the HPX trousers and HPX Gore-tex Pro Series dry smock in case, at a moment’s notice, he needs to venture outside onto the netting where the icy cold water will be blasting him with the pressure of a firehose.

Underneath all this kit he is taking a large amount of Merino base layers and Active base layers along with the Extreme thermal tops. He could be layered in five different Musto products as he navigates past icebergs to find the shortest distance around Antarctica.

Once Banque Populaire XI is around Cape Horn and lining up for the dash up the Atlantic back into the Northern Hemisphere, Le Cléac’h will have the MPX Gore-tex Pro Race trousers on hand for when the temperature increases and seas flatten and the boat can be pushed once more to its maximum speeds. With the amount of protection designed into the boat, it will be the medium-weight streamlined MPX Race range that gets the most use throughout the lap of the planet.