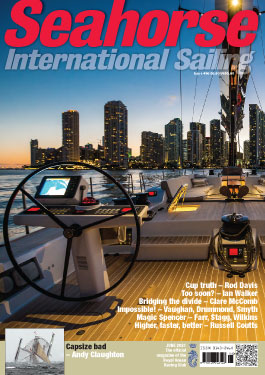 No-brainer?
And there are more considerations around that offshore medal than you think. ROB WEILAND

A formidable influence
When discussing the great and influential yacht designers some names are often easily overlooked. IVOR WILKINS has been learning more about one such talent with the help of BRUCE FARR and GEOFF STAGG…

Careful what you wish for
Volvo winner and two-time medallist IAN WALKER is very enthusiastic about offshore racing being in the Olympics… or is he?

All in a day’s work

When two brothers changed everything

Take nothing for granted

Update
The $64 million Cup question (if only $64 million still cut it), Luna Rossa’s ‘bravura’ performance, SailGP grows up and speeds up. And we lose a fine yachtsman few of whose deeds we even know of. JACK GRIFFIN, TERRY HUTCHINSON, RUSSELL COUTTS, ROB KOTHE

Rod Davis – Cup truth
Cut to the chase and certain things will always be true, while others are just window dressing

ORC – Worth some effort
Staying upright, that is. ANDY CLAUGHTON

Seahorse build table – Splash!
Now, children, this is really all getting a bit silly

Sailor of the Month
And without them nothing would ever happen