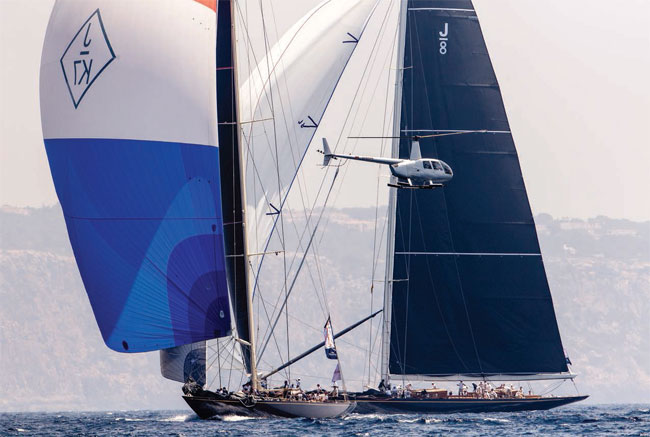 As life returns to the superyacht racing circuit it is no surprise to see that it is one of the world’s most popular, successful and spectacular regattas which is taking the lead. Hola!

After a year like no other, the message from Superyacht Cup Palma 2021 is to the point – it’s time to go racing! The 25th anniversary of Europe’s longest-running superyacht regatta will see action out on the Bay of Palma from June 23-26, with the new-look event acting smartly and adapting itself to local pandemic limitations.

Buoyed by an already promising provisional entry list featuring several stars of the superyacht world, the event now features new racing classes that offer something for all possible competitors. With the determined support of SYC partners, friends, suppliers and collaborators – not least the prestigious Real Club Nautico de Palma which has expanded its long-standing involvement – the organisers are optimistic they can meet the pent-up demand for competitive and enjoyable racing.

With planning now at an advanced stage, Superyacht Cup Palma is aiming for a spectacular summer display at the home of Mediterranean superyachting.

‘We know that all the participants, owners, guests and crew are very keen to get back out racing and to enjoy time onboard,’ says SYC event director Kate Branagh. ‘For some it is the competition that is important, for others it is the joy of sailing with friends and family.’

And she adds: ‘Knowing that level of enthusiasm, passion and support is out there is inspirational, we want to make sure we do everything we can to ensure Superyacht Cup Palma will be a reality in 2021.’

With more than a dozen provisional entries already received, the SYC team are clearly not alone in looking to make the dream a reality. Among those keen to join the spectacular celebration of sail are SYC first timers Shamanna.

Main picture: the J Class yacht Velsheda battles it out with her rival Topaz on the way to a very narrow victory back in 2018. Itʼs hoped that both of these yachts will be back for a rematch this year – if they are joined by at least one more J Class theyʼll have their own class within the regatta

‘Superyacht Cup Palma has a fantastic reputation and the new owner of Shamanna is very keen to put her through her paces in what we are sure will be a competitive fleet,’ says Tom Aiken, captain of the 35m Swan. ‘Palma is a great place to be, with something for everyone ashore, plus all the support services on hand, and the reliable breeze out in the bay pretty much guarantees we will get great racing. We know that Kate and her team will put on a great show and we can’t wait to get out there. June can’t come soon enough.’

A possible contender for the highly prized overall SYC title, the spritely Shamanna may face stiff competition from the likes of Highland Fling, Magic Carpet3 and Leopard, all early and high-profile possibilities on the provisional entry list.

Meanwhile, out to defend her 2019 class win, the Spirit of Tradition yawl Bequia is looking set for another visit to Palma. She will be competing alongside other SYC returnees such as Child of Lir, the stunning Ganesha, elegant Missy, regatta regular Saudade and the Bill Langan-designed Huckleberry. The latter’s debut in 2019 was rewarded when the 40m modern classic ketch became the inaugural winner of the North Sails Trophy, the handsome Boat of the Day prize which will now be awarded annually in memory of North Sails founder Lowell North.

Also set to return – and currently the largest entry to put their hat in the 2021 ring – is the impressive 47m Perini Navi creation Aquarius. While not in the lightweight flyer category the inclusion of Aquarius on the growing entry list demonstrates that, as ever, Superyacht Cup Palma is a very broad church that is attracting an ever-wider fleet.

Potentially further adding to the throng are a number of possible entries from the ranks of the majestic J Class fleet, several of whom have been regular attendees at SYC over the years. This year interest has been shown by both Topaz and the venerable Velsheda, the latter no doubt keen to repeat her narrow but well-deserved overall win in 2018. If another J Class entry steps up and joins the fray, they will get their own racing class, adding another string to the SYC bow.

In fact, new racing classes are likely to be something of a feature at Superyacht Cup Palma 2021. With the focus firmly on a return to exciting and entertaining racing, the team is highlighting the introduction of a dedicated Performance Class – a direct response to a growing demand from the owners and crews of the increasing number of ultramodern yachts.

Bringing the competitive element and thrill of a mass racing start under RRS on its own bespoke course, the Performance Class will further add to the regatta’s already broad appeal, satisfying the highenergy requirements of the go-faster contingent. It will be joining the longstanding Superyacht Class and Corinthian Class, itself another popular addition when first introduced back in 2017.

Above: the Wallycento Open Season (formerly known as Hamilton) revels in the reliably strong breeze of the Bay of Palma – an ideal natural arena for superyacht racing where the worldʼs best tacticians and skippers will always find plenty of scope to test their mettle.
Below: the purpose-built racers like Open Season and cruiser-racers like this SWS100 used to compete directly against one another, but with growing interest from owners of ultra-modern, high-performance racing yachts, a new Performance Class has been created and some of the fastest superyachts in the world are expected to take part in the 2021 edition 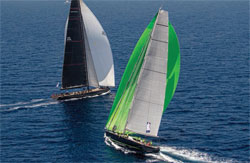 An obviously more relaxed counterpoint to the Performance Class, the non-spinnaker Corinthian option also – this year in particular – opens the door to owners and captains choosing to race with fewer crew. While Mallorca boasts an extensive population of experienced and available race crew already on site, taking to the racecourse with a reduced line-up could offer an alternative to having to navigate the vagaries of ever-changing pandemic travel restrictions.

‘Over the past quarter of a century Superyacht Cup Palma has gone from strength to strength, and a big part of that success has been listening to what owners, skippers and crews want from the event,’ says Branagh, whose Aquamarine Events took the helm at Superyacht Cup Palma in 2013. ‘And this year, perhaps more than any other, we have heard them loud and clear. Introducing the Performance Class – and before that the Corinthian – is part of that process.’

Underpinning the entire endeavour is the obvious and continuing support of SYC’s numerous partners, friends, suppliers and collaborators – described as “incredible” by Branagh. Front and centre in this array is the event’s destination partner, 100% Pure New Zealand, the campaigning project run by Tourism New Zealand, a longstanding sponsor.

Also staying the course after a turbulent year – and indeed expanding its involvement – is Real Club Nautico de Palma, which has delivered professional race management to the event since 2011.

With the usual SYC race village impractical this year due to local restrictions, the iconic club will host the event and is making a few berths available to competitors on a first come, first served basis.

Welcoming the enhanced relationship, RCNP President Emerico Fuster says: ‘The partnership that we are launching this year benefits both our club, which has increased the calendar of its prestigious events, and the SYC, which joins its name with that of a world-renowned entity.’

Also continuing their considerable support and backing are the SYC Silver Partners, including some of the world’s leading superyacht services for whom Palma represents the focus of their Mediterranean operation.

For an event that began life back in 1996 as a simple end of Mediterranean sailing season sail loft get-together for crews waiting to go transatlantic, Superyacht Cup Palma has come a long way. A regatta that has shown itself to be responsive and versatile over the past quarter of a century, 2021 is an anniversary that deserves to be celebrated. In the context of more than a year that has been dominated by the grim fallout of a global pandemic, Superyacht Cup Palma is hoping to provide a celebration that will have even greater significance.