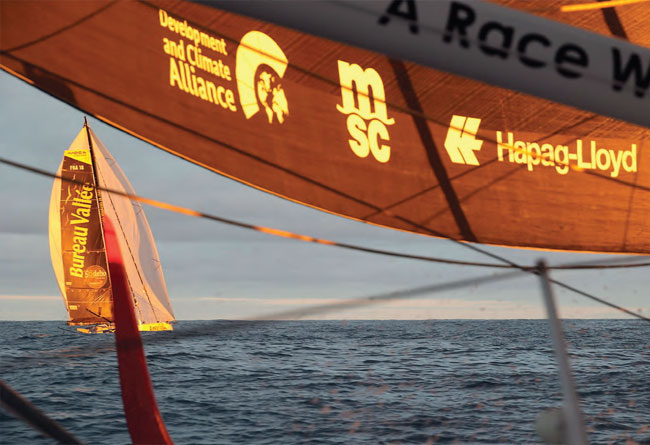 The Vendée Globe fleet may essentially be racing in three different classes, but within those groups the competition has been closer than ever seen in a previous solo round-the-world race. Former Virbac skipper Jean-Pierre Dick tells that in the total of six months that he spent racing single and two-handed in the Southern Ocean he never once saw a single other boat. Here Boris Herrmann on Seaexplorer enjoys a tussle with Louis Burton’s Bureau Vallée – the previous race winner as Banque Populaire VIII. This time around on some occasions five or even six Imocas have been racing in sight of each other… after sailing 15,000nm halfway round the world.

FOILERS ARE VERY INTERESTING!!!!
– Jean and Anne Le Cam
I’ve never sailed on a foiling Imoca so it was interesting to have Kevin’s [Escoffier] take on it. These are boats that can go very fast, but it’s ‘on’ or ‘off’ . It doesn’t look easy to deal with. For me they are not boats made for the Vendée Globe, they’re not adapted to what we’re doing here. There is a casting mistake. This ‘flying around the world thing’, only guys on land can talk about it.