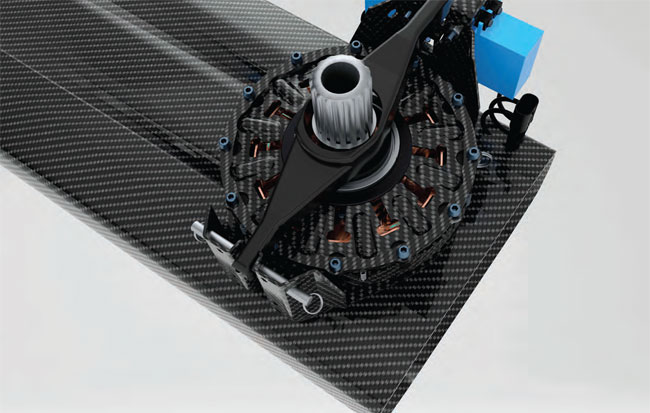 Smooth and consistent power delivery from the grinders is the key to keeping your AC75 aloft... and that took a bit of a Harken rethink

Have you noticed something different about the way the AC75 grinders are working their pedestals? It’s not what you see in the videos (if you catch a glimpse of them at all as they now practice their art low in their cockpits well out of the airstream); it’s what you don’t. You’ll never see any of the grinders pause, shake their handles or reverse direction when changing gear. Instead they just keep going at a constant cadence, maintaining the optimal 80rpm. The new technology that enables them to do this – a game-changing innovation by Harken called True-Clutch – has been on the AC75s for more than a year but until now it’s been kept strictly secret.

For a very long time, pedestal systems on sailing yachts have relied on ‘dog clutches’ that activate by manually engaging sets of teeth to shift from one gear or function to another. The dog clutch mechanism can be activated in various ways with a button, lever or switch, or with the grinder handles themselves, but whichever way it’s done the whole team of grinders has to stop working while the clutch is engaged, which inevitably results in a loss of efficiency. Generations of sailors just accepted it, even in the highest echelons of the sport. But with the advent of large, fully foiling raceboats it quickly became a very big deal.

‘Once the boats started flying, almost everything changed,’ says Mark Wiss, director of Harken’s global grand prix and custom yacht team. ‘On the AC50s the grinders never stopped. They had to keep the oil constantly moving and that pause was a real problem. The grinders lost momentum, it slowed them down and stopped the flow of oil.’

Main picture: nope, itʼs not a next generation superbike clutch; itʼs the all-carbon clutch from an AC75 grinder pedestal, which allows genuinely seamless gear changes. Developed by Harken and refined into two new models for the current Americaʼs Cup cycle, Harken True- Clutch can handle more than 1,000Nm of torque and yet the whole assembly weighs just one kilo...

The output of each pedestal drives a far wider range of functions than ever before: mainsheet and traveller, jib sheets, barber haulers, runners, main and jib cunninghams, mainsail outhaul, foil and rudder wing flaps, code sail halyards and more. Trimmers’ reaction times have to be a whole lot quicker and while they’re at it the flight controller is relying on power from the same source, at the same time. With all of this going on, the power from the grinder pedestal must be shifted between functions and gears much more frequently – perhaps a dozen times during one 90-second gybe – and when every shift requires a pause, the boat becomes much harder to sail.

‘True-Clutch was originally developed towards the end of the 35th Cup cycle in Bermuda,’ Wiss recalls. ‘Oracle came to us and said this is a real issue. The grinders had an optimum cadence that they wanted to preserve, at about 80rpm.

They’d speed up to 100, 120rpm at times but mostly they’d maintain that ideal speed.’ 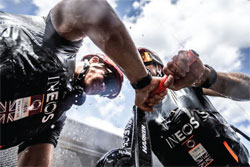 Above: ʻyou can measure its effectiveness by the smiles on the grindersʼ facesʼ. Until now, teams of grinders on every large, manually powered racing yacht have had to pause while changing gear. Now they can just keep going – and keep the hydraulic oil constantly moving.

The pressure was on to design a solution – and deliver it fast. Harken assembled a crack team of engineering talent from its Italian and American operations to work alongside Oracle’s own in-house team, with Harken Italy’s chief engineer, Michele Cazzaro, taking the lead.‘ We couldn’t just steal a clutch solution from the automotive industry because there wasn’t anything suitable,’ says Harken engineer Ben Biddick, who was part of the design team. ‘Weight is less critical in those applications than it is for us, and we were working with a different range of torque. We have to start with what the human body can do and then tailor that into a transmission device.’

Several solutions were considered including a constant mesh gearbox but that was too heavy, too complex and a suitable one for a humanpowered pedestal would have taken too long to design, test and build.

Cazzaro’s elegantly simple bespoke solution for was more akin to a motorcycle clutch: a stack of friction plates and a spring-loaded pressure plate in a slim, lightweight housing. But unlike a motorbike clutch, which is activated manually, True-Clutch uses small electric servo motors to control its activation. ‘We have to think harder about ways of conserving power,’ Biddick says, ‘and the ever-creeping saltwater is a challenge with everything we do.’ 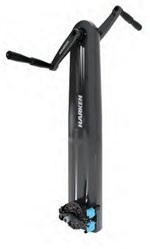 Above: True-Clutch can be fitted on the base of a pedestal, as shown, or in various other places throughout the system.
Below: the single True- Clutch is used for fully hydraulic functions.
Bottom: the double True- Clutch with an overdrive box is used with a winch for hoisting and gybing 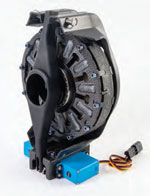 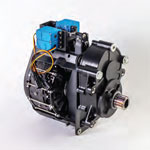 ‘For every Cup cycle we download the rule, try to imagine how the boats will develop and put together a general package of the sort of things they might need,’ says Wiss. True- Clutch was part of that package.

The new Single True-Clutch is a refinement of the original but it's built entirely in carbon fibre (even the spring, which is has a lower modulus than the other components). It can handle more than 1,000Nm of torque (the maximum output of an eight-strong team of world class grinders), yet the whole assembly weighs just 1kg. ‘People will probably ask why we didn’t do this before,’ Wiss says. ‘The answer is because the technology wasn’t there to make it small and light enough.’

The Single True-Clutch allows seamless, full-power shifting in and out of individual functions and is adequate for most if not all of the manual-powered hydraulic functions on board. For functions involving a winch, such as hoisting code sails or gybing, a more complex Double True- Clutch has also been developed and delivered to the teams. This enables the grinders to shift throughout the sequence of winch gears without having to stop or change cadence, and it’s integrated with an overdrive gearbox that allows the output to accelerate and return to normal, on demand. ‘It’s a new concept for the AC75s that we developed with a mindset that came out of that cycling world,’ Biddick says.

On an AC75 it’s the trimmers and flight controller who decide where the power goes, using electronic push-buttons mounted at their stations and linked back to the servo motors on the Single and Double True-Clutch assemblies. The reaction time of this electronic relay is much faster than any mechanical linkage could achieve, Wiss explains.

Wiss and Biddick are both tightlipped about the actual numerical efficiency gains for a team of grinders using pedestals with True-Clutch over an equivalent team using a regular dog clutch system – that’s the sort of data rival manufacturers would love to get their hands on – but while it’s clearly substantial, the functional benefits of True-Clutch are probably more important. ‘You can measure that by the smiles on the grinders’ faces,’ Biddick says with a grin. ‘You no longer have two guys fighting each other or trying to shake the handles slightly out of sync. One key factor is that the accumulator charges stay up. You don’t have the problem of ‘I can’t trim the mainsheet while the other guys are bleeding off something else.’

It’s a testament to Harken’s rocksolid resolve to be at the absolute forefront of sailing technology that the company puts so much effort into developing niche solutions like True- Clutch for America’s Cup teams and other grand prix campaigns even when there isn’t a strong commercial motivation for doing to. ‘The Harken brothers have always encouraged us to do that,’ Wiss explains. ‘Sometimes the technology transfers into commercially viable products for the broader sailing market. However, a lot of the time we develop something that works very well for the team but then that’s the end of it. And that’s alright.’

True-Clutch is undoubtedly relevant for any racing yacht, with or without foils, that has a team of grinders on board. ‘For now it’s available in standard AC75 size,’ Wiss says. ‘How we expand the range depends on what the market requires.’ There are clear benefits for boats like TP52s and Maxi72s if class rules allow the technology, which remains to be seen.

Will grinders remain part of grand prix sailing? ‘I hope so and I think they will because it’s an important part of the athletic side of sailing,’ Wiss says. ‘It’s interesting that they’ve disallowed the bicycle technology that was used in AC35 because of the disassociation with sailing – and it was Team New Zealand that wrote the no-bike rule despite having used it to win the Cup. We were already preparing a bicycle grinder solution and have put it to one side (for now!).’