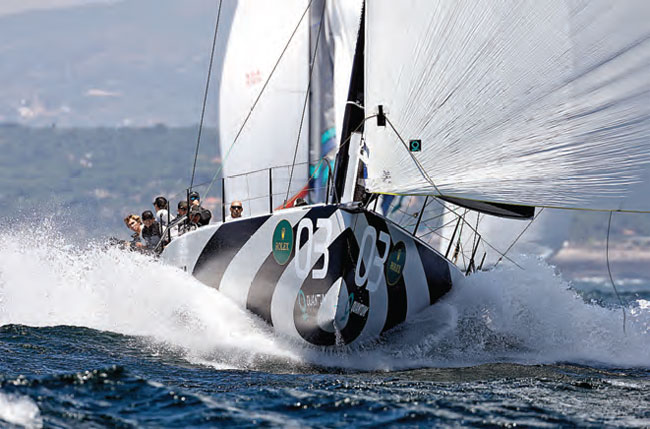 Doug DeVos is one 52 Super Series team owner who has not been completely deprived of his love of TP52 sailing and racing. While the Quantum Racing raceboat has remained idle this summer along with the rest of the European fleet, DeVos has been lucky enough to have been able to race his second TP52, Windquest, formerly the 2015 championship-winning Quantum Racing, in the new Great Lakes 52 Series.

This hastily assembled new circuit has enjoyed close, spirited, corrected-time racing this summer under ORR, with up to six boats competing at different times, most recently Windquest, Robert and Laura Hughes’ Heartbreaker (the former Alegre), Chris Duhon’s Mockingbird (which began life as Patches), Philip and Sharon O’Niel’s Natalie J (which was formerly Fox), taking on the shiny brand new Botín 52 Fox of Victor Wild as well as James Murray’s Pac 52 Callisto, the Judel-Vrolijk design that was launched as Invisible Hand. After 16 races DeVos leads the series.

The charismatic 52 Super Series co-founder and stakeholder DeVos originally came to the TP52 in the MedCup at the very beginning in 2005 with the Quantum Lexus programme which was skippered by Russell Coutts. He missed out on the 2006 season, then in 2007 joined the Warpath programme of Steve and Fred Howe. But it was in 2008 when the winning relationship with Terry Hutchinson had its early foundations after the first Quantum Racing was built. Since then DeVos has raced each and every season whenever his commitments as president (up until 2018) of the Amway Corporation have permitted.

Ask the circuit’s most passionate fan how many days he races, between his local regattas and events at home and the 52 Super Series, and he has no need to count… ‘Not enough,’ he smiles. ‘I can never do enough. I love it.

Main picture: When the original MedCup came unravelled with the world economy nine years ago Doug DeVos was one of a group of three owners who wrote the cheques to save the series, agreeing to take over the circuit with the commitment to seeing it through the dark times. In a normal season the Super Series, which emerged from that hiatus, is unchallenged as the world’s premier grand prix yacht racing series. Quite the result

‘I always get to two or three Super Series regattas, the Mackinac Race here takes a weekend, then the Harbor Spring Series and two or three other weekends on the Lakes with family and friends.’

But he does not see himself coveting the life of a full-time pro sailor. ‘The first year I did the MedCup I did four regattas and I loved it but it was hard to commit the time. But really I love competing, I love sailing, I love being with everybody. And I love watching it.

‘Even on a Wednesday night at our club in northern Michigan I love just seeing people going out sailing, every different age, shape and size of people and boats, I love watching and seeing people being active and enjoying our sport. And I get to participate vicariously sometimes, watching the Super Series website when I can’t race. I just love to watch people sail.’

So DeVos is especially well placed to assess the current level of TP52 competition compared to the days of 20-plus boats and America’s Cup teams in the early days of the MedCup. ‘Since then the quality of the competitiveness, the level, has increased relentlessly year on year and it continues to get tighter. In the earlier days there were several clear levels.’ DeVos asserts, ‘Now the professionalism all the way through has increased, everyone is in a much tighter band. Everyone can win, everyone can lose. You have good days. You have bad days. Winning a TP52 regatta is hard.

‘We had a lot of fun in the 2007, ’08, ’09 years and it was good. Then we had a couple of tougher years keeping the band together, and now it has coalesced to be a group of committed owners, committed sailors and really well-run organisation and racing. Our CEO Agustín Zulueta does a great job, as does our class manager Rob Weiland. I think we have learnt a lot over the years but the key is that we keep trying to make it better.’

Drawing on his parallel experiences as a team owner in other sports DeVos has always been an advocate of advancing technology to make the circuit as fair and competitive as possible and loves the idea of sharing the vision with a wide fanbase. ‘The main thing is now we have to keep building on the quality of the racing, the quality of the officiating and the quality of the operations, using more technology for the mark setting, also using the telemetry for presenting sailing better.

‘On the water the racing is now at an extremely high level. It reminds me of some of the sports leagues in the US where officiating becomes more critical as competitiveness increases, when one call here or there can have such an impact.

‘These boats are so fast when it is blowing 20kt and you are under spinnaker that to do a circle you are effectively out of the race. Thinking of alternative penalties and how to make calls like that, that could be interesting. If we could have transponders in the marks so we don’t have to ping them all the time, that would be good too. We have been talking about that. We were using robotic, electric-powered marks at home positioned by GPS last weekend and we sailed in 20-25kt in big waves – they stayed in place and worked really well. Though you can’t move them too far!’

And while the high-octane world of the 52 Super Series sets his pulse racing, DeVos loves the further intimidating challenge of stepping from an intense office environment into the hot seat on a TP52 that is crewed by some of the best sailors in the world; the unique pressure of taking over the helm for a regatta – especially when Quantum Racing are already on a winning streak...

And while there is an obvious commercial dividend for the Quantum sailmaking brand that DeVos owns, he also cherishes ‘any chance to make the sport better. Simply we want more people out there having more fun, more people out there doing more sailing. That is my biggest single motivation.’

Winning is obviously important to DeVos but, as Terry Hutchinson told the team time and again, it is about perfecting the processes. ‘It is great to win but as soon as you don’t win you learn something, you challenge yourself and the team and you create a solution to have a better chance to win next time out.

‘It is the same with any team sport. As you know we are closely involved with the Orlando Magic [the basketball team bought by the DeVos family in 1991] and it is the same, you are out there competing all the time. And we certainly don’t win every game! ‘Wish we did…’
Andi Robertson