A time to change 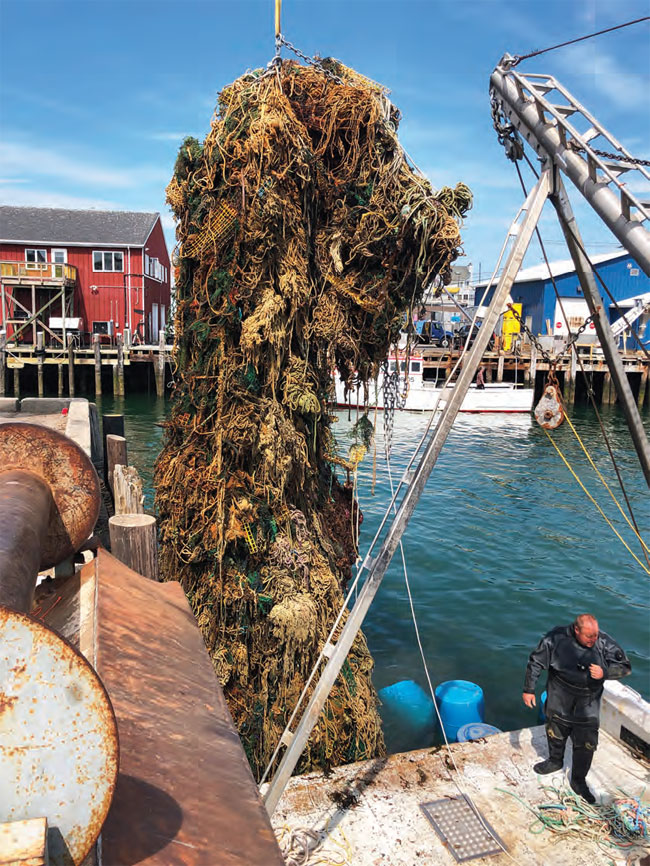 Man has proven excellent at making technical advancements to ease our lives with less than excellent side-effects for other species...

What do shrink-wrap, polystyrene and derelict fishing gear have in common? They are three of the most insidious types of environmental and marine plastic pollution, and create complex, intractable problems on a global scale. The marine industry is taking the lead in tackling all three of them – with funding and support from 11th Hour Racing, an international organisation that works to mobilise sailing, maritime and coastal communities with an innovative approach to inspire solutions for the ocean.

‘Looking at land and sea as interconnected and layered ecosystems, we are seeing our plastic footprint show up both on land and at sea, at the surface and below,’ says Rob MacMillan, president of 11th Hour Racing, ‘While we often talk about ocean plastic pollution in the context of plastic water bottles and consumer packaging, the truth is there are other contributors to the issue. We are committed to supporting solutions that not only prevent plastic pollution, but also advance more circular solutions to plastic waste.’

Plastic Wrap
Low-density polyethylene (LDPE) – also known as plastic film or shrinkwrap – is increasingly seen as a scourge of modern life. Despite being made from exactly the same stuff as most other plastic products, we’re often told – luckily incorrectly, as it turns out – that plastic film is impossible to recycle. The reality is that plastic film has historically been exported for recycling, but this option is becoming increasingly difficult given tighter standards and restrictions overseas. Colossal amounts of it are sent to landfill and, as most sailors know only too well, far too much of it ends up polluting the ocean… and fouling our propellers.

Main picture: this enormous entanglement of ‘ghost gear’ – an accumulation of derelict lobster pots and fishing nets – was retrieved from the Gulf of Maine by local fishing crews and professional divers in a pioneering project that was organised by Global Ghost Gear Initiative and funded by 11th Hour Racing

The marine industry is a minnow in all of this but some of its practices, such as shrink-wrapping boats for winter storage, are plasticintensive. It takes roughly 14 kg of plastic film to wrap an average-size, 40-foot boat. In New England alone, where 50 to 80 per cent of the half a million local boats are wrapped, this generates at least 3,750 tons of plastic waste every year and only a fraction of that is recycled. An environmental organisation from Newport, Rhode Island, USA that is focused on improving ocean health decided to do something about it.

‘It isn’t that shrink-wrap cannot be recycled,’ says Dave McLaughlin, executive director of Clean Ocean Access (COA). ‘It’s simply that there aren’t enough recycling streams available’. Plastic film needs to be recycled separately from other materials, he explains, because when it’s mixed with other plastics it will often cause the processing machinery to jam.

Since this type of material is used widely beyond the marine industry, COA began to look at the bigger picture around this issue, and engaged 11th Hour Racing to take a deep dive into plastic recycling, to research a viable and sustainable solution to this ocean health challenge.

The first phase of the grant awarded to COA by 11th Hour Racing involved collecting shrink-wrap waste from local marinas to establish a “feedstock” – a large enough quantity of plastic film to make it worthwhile for a recycling company to process it. That turned out to be the easy bit, with 6.4 tons of plastic wrap collected from a few local marinas last year and a target of collecting 50 tons in 2021. ‘It’s easy to scale up,’ McLaughlin explains, ‘by collecting plastic film from other industries, like local farms and construction sites which use enormous amounts of it.’

The second phase of this pilot programme involved sending the plastic wrap collected to the nearest recycling facility that would take it – in Illinois, compared with a much longer trek across the globe to China – but after this phase things get difficult. ‘Lots of manufacturers would buy our recycled plastic,’ McLaughlin says. ‘But most of them want to mix it with 70 per cent virgin plastic.’ It’s not a sustainable cycle unless the end products contain more than 50 per cent recycled plastic, so the search continues for either a suitable manufacturer or an easily marketable product that COA could produce.

‘We can’t go back in time, as plastic has brought so many improvements to our lives,’ McLaughlin says. ‘But it comes with an immense responsibility, something we are playing catch-up on and hopefully not too late.’

Polystyrene
All plastic pollution is bad for ocean health but some types are much worse than others. One of the most destructive is polystyrene (styrofoam). Not only does it break down rapidly into pieces that are a perfect bite size for many birds and fish, it also contains highly toxic, carcinogenic styrenes and easily absorbs other environmental pollutants. A grant from 11th Hour Racing allowed a UK-based wildlife conservation organisation, Fauna & Flora International (FFI), to start scoping out the source of polystyrene pollution. ‘Research shows that expanded polystyrene can have a greater toxicity than other microplastics,’ says Hazel Akester, programme officer for marine plastics at FFI, ‘and also a greater ability to aggregate toxins.’

‘A huge amount is used in construction, and takeaway food containers,’ Akester says, ‘and there are already big efforts to minimise those sources of pollution. But nobody was looking at its use in the marine industry and we saw a gap that we could fill.’

Polystyrene breaks down quickly, and gets dispersed by the wind and drifts with the ocean currents, making it hard to track to its source. However, FFI’s research has identified some regional trends. FFI has found that very little polystyrene found in the ocean comes from construction and takeaway containers, as most appears to come from fishing floats, pontoon floats and fish boxes. While uncovered polystyrene seems to have been mostly phased out by the aquaculture and leisure boating industries in the UK and parts of Europe, it’s still heavily used in other sectors such as fisheries, and in other parts of the world.

Akester says tackling the issue requires a collaborative approach. ‘We never apportion blame,’ she says, ‘and the fisheries and aquaculture sectors have an incentive to avoid doing things that affect the quality of their catch, so plastic pollution is an area of mutual interest.’ 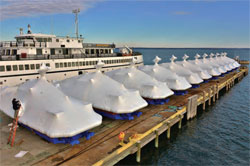 Above: the common practice of shrink-wrapping boats for winter storage generates at least 3,750 tons of plastic waste every year in New England alone. A local environmental group, Clean Ocean Access, is working on a viable and sustainable recycling solution.
Below: most of the polystyrene that pollutes our oceans seems to come from the fishing industry. A grant from 11th Hour Racing has enabled Flora & Fauna International to research and scope out the problem and start looking into potential solutions, such as switching from polystyrene to less toxic polypropylene 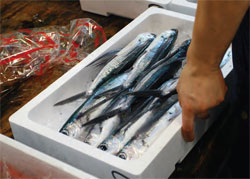 One potential solution is making polypropylene foam floats and boxes available as an alternative. It may cost more, but this material is less fragile so it lasts longer than polystyrene. It’s more inert, and while it is susceptible to UV degradation, it is more easily recycled.

The next steps of the project that FFI is implementing include investigating how much microplastic pollution enters waterways from the use of polystyrene in the marine industry and sailing communities, and producing an analysis, a set of recommendations, and a strategy to inform broader interventions by businesses, NGOs, and policymakers on the use of this material.

Ghost Gear
Another great example of ocean conservation work with the fishing industry is the Global Ghost Gear Initiative (GGGI), which tackles one of the most harmful forms of marine debris: derelict fishing gear. Estimates suggest that 800,000 tonnes of plastic fishing gear is lost or discarded in the ocean every year. Moreover, despite being lost, some types of nets and pots – known collectively as ghost gear – carry on entangling and suffocating fish, marine mammals, and crustaceans beneath the surface of the sea. GGGI’s research also confirms that lost gill nets and lobster pots usually remain in perfect working order and each successive creature that gets caught in a pot becomes bait for the next.

GGGI comprises conservation groups, multinational seafood companies, fishing ministries of key nations and several certifying bodies among its 105 members worldwide. Its research has confirmed that ghost gear is almost never deliberately dumped at sea. Rather, it’s lost due to the gear being poorly designed and because fishing crews are sometimes forced to release it in bad weather. Another less obvious finding is that huge accumulations of ghost gear occur in “hotspots” due to undersea topography, currents and gyres.

11th Hour Racing is funding a GGGI project in the Gulf of Maine, USA, to identify hotspots, using sidescan sonar, and to recover the ghost gear with the help of professional divers and local fishing crews.

‘We’ve done one big ghost gear removal with 11th Hour Racing in 2018,’ says GGGI director Ingrid Giskes. ‘We focused this project on the Gulf of Maine because it’s a hotspot of ghost gear, we have well wellestablished partnerships with other organisations in the area, and the Gulf of Maine lobster fishers wanted to work with us to retrieve the gear.’ 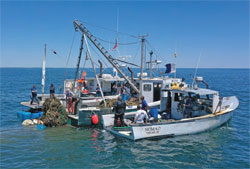 Above: Global Ghost Gear Initiativeʼs pilot project established valuable best practices for future gear removals. This ball of gear was much bigger than expected and had to be towed back to harbour.
Below: polystyrene is one of the worst types of marine plastic pollution. Itʼs highly toxic and ingested by many species

As well as the gear removals, which have established important best practice for future efforts, the project has started discussions among fishing crews and other stakeholders to identify ways to improve the gear and avoid it getting lost in the first place. For example, a new type of smart buoy called Blue Ocean Gear is currently being trialled to track fishing gear at all times, including traps and nets that are far offshore. These buoys alert fishermen of their new location when gear has moved too far, allowing for direct retrieval rather than aimless searching. Next year’s plans in the Gulf of Maine include mapping ghost gear hotspots with systematic surveys and collating useful findings that can be replicated elsewhere.

‘The marine industry’s impact might be small in the grand scheme of pollutants,’ says Rob MacMillan, president of 11th Hour Racing. ‘However, what is exciting about our industry is that it offers an excellent opportunity to create pilot projects with materials that much larger industries rely upon. Recycling shrink-wrap from the boats that enter harbours throughout Rhode Island this summer is an admirable goal, but once we bring in other industries such as agriculture, shipping and construction, we are then creating a sizeable impact in our community that can be replicated by others.’