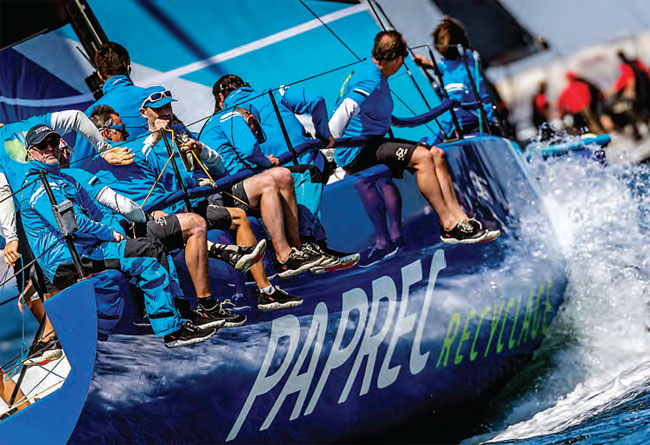 The waters off Cape Town were pretty much glassy smooth. There were a few cat’s paws chasing across the bay and the only TP52 out on the water is the French crew of Jean Luc Petithuguenin’s Paprec. It is situation normal.

The Paprec guys, led by Stéphane Neve, may have the oldest boat in Cape Town and a budget a fraction of the top teams but, as usual, they are taking every chance to be on the water, doing what they love. And they still do it for the love of it. On the Paprec team only the boat captain, shore crew, cook and coach are paid. They cherish their sailing hours more than most. Consequently there have been many occasions since they joined the circuit in 2013 when Paprec have not rushed back to the dock, but stayed out to enjoy the location.

On every count Cape Town delivered for them. After missing last season ebullient owner Jean-Luc Petithuguen was reinvigorated, delighted to be back on the 52 Super Series competing at the top level and often mixing it in the upper half of the fleet. The team were reasonably content with the way they sailed. ‘For us who have always been fans of the Volvo Race and things like the Cape to Rio, being able to go racing in Cape Town on some of the most famous sailing waters in the world was a great experience.

‘And to be back on the circuit, racing against the best in the world also felt so good,’ smiles project manager Stéphane Neve.

To finish towards the back of the fleet and yet keep smiling and learning might seem to require a special resilience, exceptional management of expectations even, but the Paprec crew keep it all in perspective. ‘For us the measure is always to look back at the event and evaluate our performance rather than the results table, how we sailed and what we learned.

Main picture: Ecole de Voile Océane-Saint Philibert is the sailing club from which Jean-Luc Petithuguenin enters the glamorous 52 Super Series, saying a lot about this very experienced Breton skipper. Petithuguenin’s 2015 Vrolijk design – the former Rán – is also a regular competitor at Spi Ouest each year in La Trinité as well as at other local regattas when time permits. Let’s just go sailing

‘We are on the circuit to get better, to learn from the best and to sail among them. Rarely are we ever unhappy as a team, we are lucky to go racing and always try to get the most out of it,’ adds Neve. ‘But we always want to finish an event feeling that we have raced properly and made the best use of the tools we have available.’

Paprec have also made it an integral part of their philosophy to introduce young French sailors to grand prix racing with the chance to progress both on the raceboat and as shore crew. Trimmer Valentin Sipan is a past 470 Olympic triallist and Junior European champion who will campaign for Paris 2024 in the 49er with mainsheet trimmer Solune Robert, both getting their first chance to step up from Olympic sailing to grand prix racing. As is past 470 world champion Jérémie Mion who sails as tactician when Tokyo Olympic commitments permit. Opportunities are also given to young shore crew to gain valuable experience and move on up the ladder.

Their 52 Super Series campaign grew from Paprec’s activities at home in Brittany where they won Spi Ouest three times with their TP52 as well as representing France in the final Admiral’s Cup in 2003 and twice racing at the Commodore’s Cup, winning in 2006. The TP52 is Petithuguenin’s leisure pursuit, but his company Paprec have been loyal sponsors of sailing in France for more than 15 years, previously as sponsor to Jean-Pierre Dick and now backing Figaro winner Sébastien Simon with a new Juan Kouyoumdjian Imoca.

Bringing young energy into the TP52 class has also been a pursuit of Bronenosec’s Vladimir Liubomirov. Five or six Russian sailors have been with him for more than five years and the best now more than hold their own among an international crew which this year has Morgan Larson and Jonathan McKee as afterguard. Tokyo commitments require Croatian ace Šime Fantela to take a break from his first grand prix big boat programme but Fantela will be back, Liubomirov assures us, returning to a campaign which he says really was mutually beneficial.

‘We learned and profited from Šime’s intensity and drive. He is thinking sailing and racing from the minute he gets up until he goes to bed.

‘He speaks about it all the time, watching videos of starts, and he is intensely focused. Many of the professionals we have in the circuit came out of the America’s Cup in Valencia and are the best at what they do, but it is good to be able to bring in young Olympic guys like Šime.’

Formerly a national-level windsurfer some 30 years ago, Liubomirov returned to sailing through the Dragon class and moved through the RC44s as well as campaigning Swan 60s, ClubSwan 50s and 45s, joining the 52 Super Series five years ago in Valencia, his Bronenosec being one of the nine new boats built that year. ‘I am a physicist and so first of all the technical aspects of the TP52 interest me, they have the highest level of technology in a grand prix monohull so naturally I am interested,’ says Liubomirov.

‘I talk to the team every week about everything. And many of my team are scientists too, sharing the pursuit of the best sail shapes, trying to find the perfect solutions. But for me most of all the 52 Super Series is about people. Above everything, even winning, I enjoy being with the people – there is a feeling of friendship among the owners that I enjoy so much. The TP52 circuit is truly a family of professionals.

‘I like the way it is organised, the friendship between the owners. We all learn together and see what we can do better together.’ Last year Bronenosec were several times on the threshold of their first regatta win, falling just short on the last day in Cadiz. In his drive to improve personally Liubomirov passed the helm to Fantela last year and aims to put some of that learning into practice later in 2020. He is also paying attention as Larson and McKee do their thing tactically… storing it all up for the future.
Andi Robertson