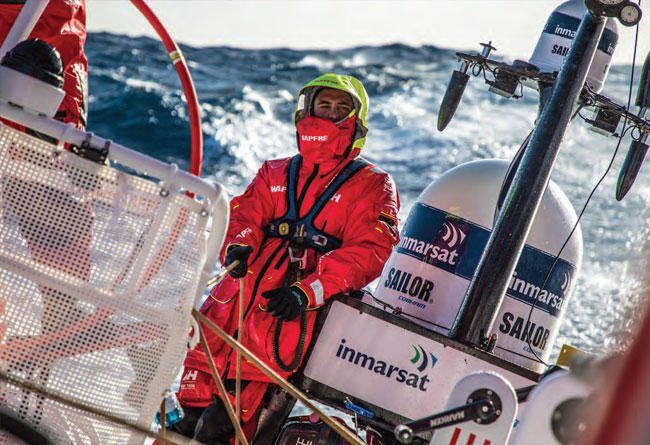 Without modern media tools and satellite communications there would be no modern round the world racing... it’s that simple

‘The Volvo Ocean Race, formerly The Whitbread, and now renamed The Ocean Race doesn’t happen without Inmarsat, that’s how important it is,’ Brian Carlin says. ‘For the teams and their sponsors it totally hinges on being able to show people what’s happening on the boats in real time. It’s no good coming ashore after 26 days with a hard drive full of amazing footage and photos. People expect to see it happening in real time, that’s a much bigger pull for viewers.’

In a career that has covered many spectacular races and regattas including the astonishingly fast-paced SailGP circuit and the America’s Cup, some of Carlin’s most groundbreaking work has been done during his stints as an onboard reporter and media team leader in the last two editions of the Volvo Ocean Race. If you’ve seen the gut-wrenching footage of Team Vestas Wind slamming at high speed into the Cargados Carajos Shoals in the middle of the Indian Ocean and the crew’s subsequent ordeal in a liferaft, that’s Carlin at work.

‘Everyone else was doing their job and my job was to tell the story,’ he says. ‘So I just kept the camera rolling and shoved it in their faces.’ Even though the crash happened far beyond the reach of any rescue services – the crew had to fend for themselves for three days on the reef before help arrived – the Inmarsat Isatphone in the yacht’s emergency grab bag enabled Carlin to tell the story as it unfolded.

Main picture: the story of the last few Volvo Ocean Races was told live, with amazing video footage streamed from the remotest parts of the Southern Ocean by a remarkable team of onboard reporters led by Brian Carlin. The crucial technology that enabled them to do their work was Inmarsat FleetBroadband, which provides fast and reliable connectivity anywhere on earth

Inmarsat’s Fleet Broadband service has been a mainstay of ocean racing and commercial shipping for many years, providing crucial and reliable connectivity for vessels in the remotest, roughest and most dangerous parts of the world’s oceans for tracking, weather forecasts and routeing, ship-to-shore communication and more. But the rapid increase of available bandwidth in recent years has been a real gamechanger, transforming ocean racing from an obscure activity in most people’s minds into a compelling spectator sport.

Just a few years ago it was almost impossible to get aerial photos, let alone live-streamed video footage, of a racing yacht powering along in the Roaring Forties thousands of miles from land and far beyond the range of any helicopter. Now it’s just normal, thanks to Inmarsat and a small team of pioneering photojournalists like Carlin who have filmed, shot and produced some of the most memorable coverage of competitive sailing in recent years, bringing the thrills, spills, challenges and triumphs of ocean racing to life for millions of people around the world. ‘It’s relatively easy to launch a drone from the deck of a Volvo Ocean 65,’ he says. ‘It’s much harder to land it.’ In the last race, drones were regularly flown in winds of up to 40kts. They lost a few, unsurprisingly.

Only 20 people have ever raced around the world via the five Great Capes as onboard reporters and it’s arguably as demanding a role as any other job on board, especially aboard the notoriously wet, uncomfortable Volvo Ocean 65s. Set apart from the rest of the crew by the need to point a camera at them during moments of peak stress and exhaustion, confined to a tiny desk in the forepeak for long hours of video editing and writing with a full schedule of daily deadlines while the boat leaps, lurches and slams through brutally rough seas in a freezing gale, it’s a job that few journalists – or sailors, for that matter – are capable of doing.

Working in one of the harshest and most challenging environments anywhere on earth, the onboard reporters can at least count on Inmarsat’s FleetBroadband technology, which powers the alwayson voice and data systems they need to deliver their work, to be totally reliable. ‘There aren’t any other vessels in the Southern Ocean,’ Carlin says. 'We were the only boats for more than a thousand miles but when we wanted to show live drone footage Inmarsat was able to give us the bandwidth we needed.’

As for the next Ocean Race, Carlin will be sitting this one out ashore from the comfort of the office. And with two new satellites added to Inmarsat’s network since the completion of the last Ocean Race, taking the tally to 14, the bandwidth and reliability of the service will be even better.