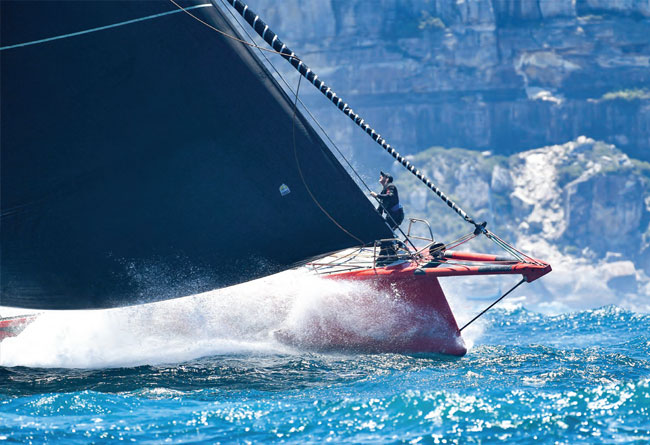 An America’s Cup team needs a new custom furler in a hurry, not a problem when you have a pedigree as good as this...

The KZ Racefurlers product line coming from KZ Marine has evolved and diversified over the past quarter of a century but the New Zealand company has remained rock solid on the founding principle that if a stock item does not meet the requirement, it will devote every effort in customising a solution that does.

From small beginnings, KZ Racefurlers has grown into a major player in the production of furling systems for grand prix race boats and superyachts, all the way through to club racers and cruisers. With the rise of Code Zero type sails and multiple staysail set-ups on large race yachts, efficient furling systems play an increasing role in highperformance sailing.

‘We produce furlers, swivels and top down adaptors with safe working loads from small one- ton units for seven-metre yachts up to a 45-ton unit we are currently working on for a 38m racing superyacht currently in build in Europe,’ says KZ Racefurlers general manager James Gordon.

Aside from the standard range, which comes in Inshore and Offshore configurations, KZ Racefurlers prides itself on bespoke solutions for clients at the America’s Cup, grand prix or superyacht level needing something different. This is done under their Xtreme series banner, replacing stainless steel parts with titanium and machining from a higher grade alloy to produce a low-profile, light and strong furling component.

Main picture: the 2019 Sydney Hobart race winner (and current course record holder) Comanche uses KZ Racefurlers for all furling sails on board, the largest being a 30T SWL unit for the J1 genoa. KZ was also commissioned to manufacture an array of custom deck gear parts for the Comanche project

‘For example, just this morning we got a call from an America’s Cup team. They want a new component for their Code Zero furling system and need it delivered offshore on Wednesday. It is now Friday. We will machine it over the weekend ready to go by courier on Monday night, fully finished.’

At the top end, much of what KZ Marine does is this type of highly specialised customisation driven by top racing sailors with an eye for detail born of thousands of miles of frontline experience.

‘They will come to us with ideas that maybe go 50 per cent towards what needs to happen,’ Gordon explains. ‘Then it is up to us to develop that concept in-house, which may take two or three design iterations before it becomes a finished product.’

This continuous dialogue and the company’s willingness to adapt and deliver quick-fire solutions ratchets up a process of constant refinement, which ultimately feeds back into the standard range – driving up the overall quality.

‘We also work closely with the major sailmakers to keep pace with the new style of free-flying headsails they are developing, which often require top-down furling systems,’ says Gordon. ‘Additionally over the past two years we have added service and distribution networks in both Palma de Mallorca and the UK to help expand our product line and ease of contact in the European market, which has been great for us.’

KZ Marine began life as a one-man company producing pressed shackles and shackle spanners. Managing director Rick Hackett bought the business in 1993 as a 23-year-old looking for a career. ‘With a passion for watersports, there was a natural lean towards something in the marine market,’ he says.

Hackett was never going to be content just pressing shackles so he set about expanding and finding gaps in the market. One opportunity arose when a producer of in-boom mainsail furling systems needed some components built.

‘He took me out for a sail to understand the product better. The next day, I bought the company. Now our Leisurefurl booms, suitable for boats up to 24m, account for about 20 per cent of our business.’

The acquisition was an ideal addition to the already established high-performance Racefurlers, which came about when the 2001-generation Volvo 60 teams were experimenting with Code Zerotype sails.

Above: Black Jackʼs bowman setting up for a peel at Hamilton Island Race Week. The elegant but robust KZ Racefurlers make these huge sails much easier to handle.
Below: new KZ15 offshore furlers and swivels get one final check over prior to being dispatched to the maxi Rambler 88

‘They needed something to tame them and we were approached to develop a solution. Illbruck chose our furling system and they won that race. For the following race in 2005- 2006, our furlers were on the entire fleet. We have held that dominance in all the succeeding Volvo Ocean Races and we continue to work with teams preparing for the next Ocean Race,’ Hackett says.

Racing around the world is the toughest testing laboratory and the reliability of KZ Racefurlers proven in that demanding environment has led to a client list spanning 100ft supermaxis, the Maxi72 class, the 52 Super Series and foiling classes from GC32s to the new TF35s and up to the America’s Cup.

The demands at this level are always about reducing weight and windage while improving efficiency, much of which comes down to materials. With in-house design capabilities and sophisticated CNC machines, KZ Marine can produce components in stainless steel, 7000 series aluminium or titanium.

Bearings, even the grease used for lubrication, and details like chafe and friction on the continuous control lines are constantly under the microscope. On the TP52 furlers, for example, ceramic bearings are used for maximum efficiency.

At boat shows, Hackett often starts a chat with a customer by setting a TP52 demo version spinning with a flick of his finger. ‘It just goes on spinning right through the conversation. They think we have discovered perpetual motion, but it is just lack of friction from those bearings. It is pretty effective.’

Over nearly three decades this small, tight-knit company has carved a reputation for listening to its customers and responding quickly and efficiently to their specific requirements. ‘We don’t like to say no,’ says Gordon. ‘We like to get stuck in and put our hands to everything that is asked of us.’

Hackett is proud of this can-do attitude that has become embedded within the KZ Marine culture over the past three decades. ‘We come across as easy-going and jovial but at the same time you will not meet a more intense group when the pressure is on. We challenge and push each other all the time and always go the extra mile to deliver.’