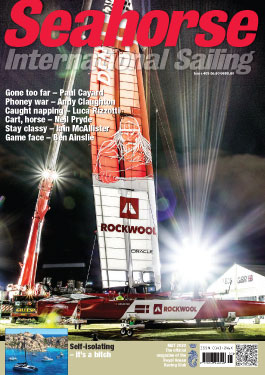 Phoney war
The enigma of four completely different AC75s was only made worse with the cancellation of the AC World Series in Sardinia. ANDY CLAUGHTON

Planting the seed
Seems strange but the Botin-designed Deep Blue is the first new racing Maxi launch for close to 10 years. JOCELYN BLERIOT and ADOLFO CARRAU

Let strong classes lead the way
When you’ve been the world’s biggest sailmaker and the king of two major sporting disciplines, then your opinions warrant a proper audience. NEIL PRYDE talks to ØYVIND BJORDAL

Stay classy
We’ve seen some shockers in recent years but the standard of racing yacht motherships appears to be back on the rise again. IAIN MCALLISTER

Who’d a thunk it?
Oak trees and acorns does not do justice to how an invitation by LUCA RIZZOTTI to a few of his friends to join him for a bit of fun in Garda turned into one of the most influential events in sailing

World news
Unbowed, and growing, a rush to new builds (amen to that), staying (120 per cent) focused, a blinding return to form and a mood change in the US of A. PATRICE CARPENTIER, IVOR WILKINS, HALVARD MABIRE, KEVIN SHOEBRIDGE, BEN AINSLIE, TOM SLINGSBY, BLUE ROBINSON, DOBBS DAVIS

Paul Cayard – Going too far
Have we really thought this through… properly?

IRC – Sustainable rating
And how one thing really does lead to another. JASON SMITHWICK

RORC news – Winter challenge
Or how we squeezed that one in just in time. EDDIE WARDEN-OWEN

Seahorse build table – Growing under your feet
How your new boat may well be doing just that. FRIEDRICH DEIMANN

Sailor of the Month
One for the boys… one for the girls. So cute