Fast across the Tasman... twice 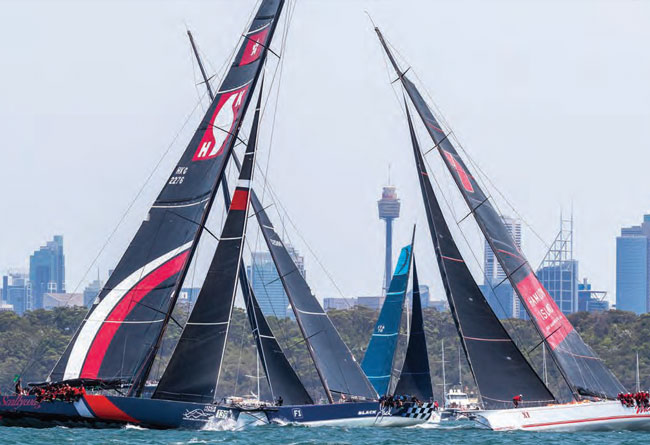 With the 36th America’s Cup as the centrepiece, the summer of 2021 in New Zealand is set to be a sailing jamboree including two ocean races across the Tasman Sea: the first from Sydney to Auckland starting in January and the second from Auckland to Southport in June.

The Tasman Sea has an unruly reputation but interest is building in the contests, which will challenge contestants and provide irresistible opportunities to stoke the always intense sporting rivalries between Australia and New Zealand.

Both are timed to form part of the celebrations marking the 150th anniversary of the Royal New Zealand Yacht Squadron (RNZYS) and enable competitors to engage in additional fixtures in both countries, creating an attractive Australasian campaign circuit.

In June last year, the Royal Prince Alfred Yacht Club (RPAYC) announced a partnership with the RNZYS for a 1,250-mile race to Auckland starting in Sydney on 30 January. The Moonen Yachts Sydney-Auckland Ocean Race is classified as a Category 1 event and is open to offshore cruising and racing yachts, superyachts, ocean racing multihulls, as well as incorporating a rally for cruisers.

Main picture: the organisers of the brand new Moonen Yachts Sydney- Auckland Ocean Race are hoping that the race will feature a spectacular duel of super-maxis at the head of the fleet

Moonen Yachts is a Netherlands-based builder of luxury superyachts that was recently acquired by Australian owners Matthew and Louise Baxter. Welcoming its support, RPAYC’s Robert McClelland, chairman of the race organising committee, says: ‘We are delighted to be entering this partnership with Moonen Yachts. Their commitment to producing global voyaging vessels of the highest standard adds to the prestige of this great ocean challenge.’

Moonen Yachts’ new investors, Matthew and Louise Baxter, live in Sydney and are no strangers to the world of yachting. ‘I started sailing when I was eight,’ says Baxter, who heads AM Group, a global group of manufacturing companies he founded in 1972 – the same year the couple bought Barbarian, a Sparkman & Stephens-designed Finninsh Nautor’s Swan 60, which they still own.

‘We sailed all over the Pacific in that boat. I circumnavigated New Zealand and I’ve sailed to Nouméa with Louise five times,’ Matthew Baxter says. ‘We’ve certainly been to lots of places, as we love to explore the unknown.’

The Baxters first connected to the brand when they spotted a Moonen yacht in Pittwater harbour, north of Sydney. ‘We were curious because she stood out. It was love at first sight,’ recalled Louise Baxter. ‘The brand is impeccable, no question, and the team is very talented,’ adds Baxter. ‘They’re all very passionate about what they are building.’ Commenting on their sponsorship of the race across the Tasman, Baxter notes: ‘It’s our goal to present Moonen Yachts to the world, to a larger audience. And of course, with Sydney harbour in our backyard and our connection to New Zealand, we’re proud to bring the brand to the South Pacific.’

Great anticipation surrounds this new blue water racing event. ‘A race between these two sailing meccas is incredibly exciting,’ says RPAYC commodore, Michael Lockley, a passionate offshore racer who was quick to commit about competing in the race. ‘The historic rivalry between us will help to draw more sailors from both sides of the Tasman Sea as well as internationally to compete.’

Aaron Young, vice commodore of the RNZYS and chairman of the 150th anniversary organising committee, says he is thrilled with the promising level of interest in the Moonen Yachts Sydney-Auckland Ocean Race. ‘The initial announcement has generated more than 100 expressions of interest, out of which we already have 10 confirmed entries – eight from Australia and two from New Zealand.

‘The interest we have received also involves a couple of the 100ft super-maxis, which would be outstanding. Once you get one in, the others often pile in as well, and we would all be very keen to see something like a Wild Oats vs Commanche battle.’

Nick Elliott, race director at the RPAYC, says Auckland and Sydney are two iconic sailing cities and the novelty of all that is happening in 2021 creates an opportunity too good to miss.

Below: despite the Tasman Seaʼs fearsome reputation, a 10-year model by weatherman Roger Badham shows that statistically there is actually a greater chance of the fleet getting held up by high pressure and fickle winds than encountering storms at that time of year. The cyclone risk is low and Badham reckons that the race is likely to involve equal amounts of beating, running and reaching

‘What we are trying to create is a circuit, which would justify the cost and logistics of committing to a campaign,’ he says.

This would include the 2020 Sydney Hobart Classic with its traditional Boxing Day start, giving the yachts sufficient time to return to Sydney to prepare for the 30 January start of the race to Auckland.

Auckland will have a packed calendar of sailing events over the summer, including the America’s Cup, J-Class and superyacht regattas, international classic yacht racing and a number of events around the RNZYS Sesquicentennial celebration.

Many visitors would no doubt also take the opportunity to cruise New Zealand waters and could then head back across the Tasman in the Auckland-Southport race in June. This would get Australian yachts back to home waters in time to compete in events like Hamilton Island Race Week before swinging into their domestic summer programme.

Conversely, New Zealand competitors could cross the Tasman in mid-2020, do a campaign including Hamilton Island and the Sydney-Hobart and then race back home in the Sydney-Auckland event.

‘We are trying to create excitement around the opportunity of putting our race in the middle of it all,’ says Elliott, who is hoping the level of interest will translate into 50 to 55 racing entries and a further 20 or so participating in the cruising rally.

One of the large racing yachts already committed is Alive, the 22m Reichel-Pugh canting keeler owned by Phillip Turner, which won the 2018 Sydney-Hobart race and scored well again this year with victories in IRC Division O, as well as ORC Division 1.

Alive navigator Wouter Verbraak from the Netherlands has been working closely with Elliott and is helping to coordinate shipping options for European yachts wishing to take part in proceedings. He is already in advanced stages of planning with three large yachts from Europe: a Maxi 72, a Southern Wind over 30m and a 24m performance yacht. Other options for shipping yachts across the Tasman in both directions before and after the race are also being investigated.

The Moonen Yachts Sydney- Auckland Ocean Race will include a two-handed division, which is expected to draw considerable interest as well. The next Sydney- Hobart will admit a two-handed division for the first time and the combination provides an opportunity for crews to put together a significant summer campaign. Two-handed racing is one of the fastest growing forms of sailing in New Zealand, with events like the Round New Zealand and Round North Island races oversubscribed.

Elliott reports considerable interest in the rally division as well, with as many as a dozen yachts from RPAYC alone showing strong interest in rallying across the Tasman and then returning home via the Bay of Islands and the Pacific islands. ‘We have a very active cruising division at the club and they put together a significant cruise every two years. Last year they completed a 1,200 mile expedition up the east coast of Australia, as far as Dunk Island, and back, so the timing is perfect for another adventure in 2021.’

As a frequent visitor to New Zealand and a regular competitor in the annual Bay of Islands Race Week, organising committee chairman Robert McClelland is perfectly placed to liaise between the two clubs.

McClelland says the event, being promoted as a ‘race between two legendary sailing cities’, is part of a wider effort at the RPAYC to expand its sailing profile. The club has already lodged a formal entry for the Youth America’s Cup to take place in Auckland during the summer of 2021, adding incentive for Australian sailors to head to New Zealand in support of their compatriots. 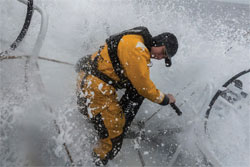 Above: Bianca Cook proves that crossing the Tasman can be a true test of a sailorʼs mettle!
Below: the 36th Americaʼs Cup is set to be the main attraction of a packed sailing season in Auckland, with regattas planned for J-Class, superyachts and classic yachts as well as the main event 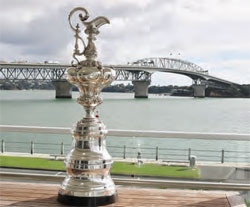 Over the centuries, the Tasman Sea has earned a reputation not to be taken lightly. ‘A theatre of drama’ is how Neville Peat described it in his book The Tasman: Biography of an Ocean. ‘A jostling, characterful cocktail of currents, water masses, oceanic fronts, eddies, layers, upwellings and tidal tricks makes it one of the most complicated tracts of ocean in the world.’

McClelland says it is certainly a stretch of ocean demanding respect, but adds that sophisticated forecasting means sailors will have access to detailed information and warning of adverse conditions.

Elliott acknowledges there is a general perception that any crossing will dish up a hard slog, but he says RPAYC has been working with wellknown weatherman Roger “Clouds” Badham, who has found that, statistically, high pressure and fickle winds are more likely at that time of year. Cyclone risk is low.

‘He found it interesting to look at,” says Elliot. ‘His model over a 10-year period showed the race would break up into equal thirds of upwind, downwind, and reaching conditions. People were concerned that it was just going to be a strong-wind slog all the way. It is encouraging that it is a much more complex challenge than that.’

The Tasman Sea both connects and divides Australia and New Zealand, its boisterous character an apt reflection of the relationship of affectionate hostility between the two countries.

Both clubs have appointed race ambassadors, although diplomatic exchanges might be lively on occasion. RPAYC has chosen one of its most accomplished members, Jimmy Spithill, while the RNZYS has appointed Bianca Cook as its flagbearer. Over many years of America’s Cup rivalry, Jimmy Spithill has wielded the verbal needle with ruthless enjoyment. He wears the badge as the “Aussie Kiwis love to hate” with considerable pride.

Bianca Cook is no shrinking violet either. Having completed the last Volvo Ocean Race campaign, she is currently preparing to lead a New Zealand crew in the next round the world race. She already has the advantage because she is planning to actually compete in the Moonen Yachts Sydney-Auckland Ocean Race in her VO65 yacht, while Spithill will be sitting it out. The fact that he will be fully committed with his own America’s Cup engagements might not be allowed to cut much ice.