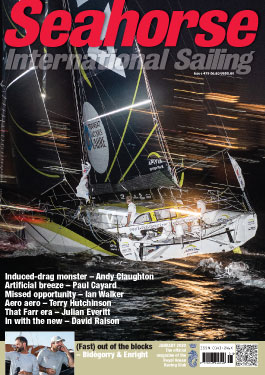 Thinking big
… but it’s still about working with what you have. ROB WEILAND

Kiwi rocket
JULIAN EVERITT looks back at one yacht designer’s career that though turbulent was never going to be a flash in the pan: BRUCE FARR

The end of the adventure
Racing around the world today is not even the same sport as it was when the cockamamie idea first began to take hold. BRIAN HANCOCK

Foiling for (almost) all

What they’re made of

View from the top

IRC – Behave
On the whole you guys are pretty good but now and again teacher just has to get firm with you. JASON SMITHWICK

RORC news – Making an impact
The arrival of the Melges IC37 is creating ripples far beyond what was expected. Good ripples, too. EDDIE WARDEN-OWEN

Seahorse build table – No limit
But why has everyone been sleepwalking around the blindingly obvious? JULIETTE BEAUFORT