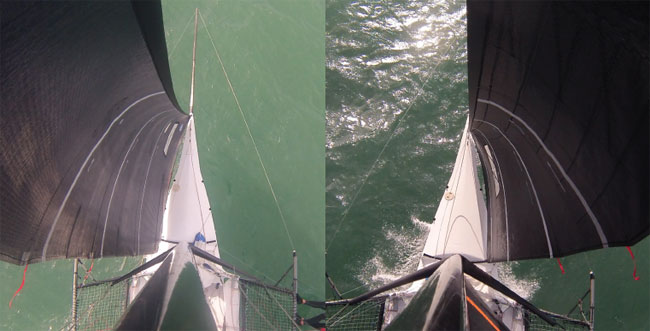 It started with the racing code zero but already the benefits are spreading rapidly out through the superyacht world (and elsewhere...)

Since Doyle Sails launched its ground-breaking cable-less Code Zero technology, the company has expanded the concept to embrace jibs, staysails and even mainsails, achieving significant load reductions in the process.

Structured Luff Technology is the new branding, which encompasses the full sailplan including cable-Less code zeros. ‘What we are talking about is sails where, rather than hanging them off a stay, we are taking the load around the natural load line of the sail,’ says Doyle CEO Mike Sanderson. ‘A whole raft of benefits come from that. ‘This applies to any jib, genoa staysail, spinnaker staysail, code zero or mainsail.’

Taken to the logical conclusion, structured luff headsails could remove the need for a forestay altogether but for practical reasons a forestay should probably be retained. However, because the sail is sharing a considerable proportion of the load, the forestay can be significantly reduced in size.

While the technology has important load-reducing implications in all applications, Sanderson believes the biggest benefits will apply to superyachts, where forestay sag is a perennial performance killer. The physics of all this are complicated, so Sanderson draws the basic triangular shape of a headsail. To demonstrate that the loadlines do not follow the outer edges of the triangle, he draws scallops curving inside the luff, leech and foot of the sail. The result looks like a series of lenses, which is the term Doyle uses.

The primary interest lies in the luff lens. ‘By following the loadline down the lens with a series of fibres, you are able to reduce the load on the forestay,’ Sanderson explains.

Main picture: before and after... these two pictures from the masthead of an 18ft skiff show the dramatic reduction in forestay sag that can be achieved with Doyle Sailsʼ Structured Luff Technology. Scaling up to a superyacht rig, the sag reduction can be as much as two metres
Below: this stress direction map of an MC38 headsail illustrates the loads along the lenses

‘On a superyacht, if you wanted to limit forestay sag to 400mm, for example, with a conventional headsail you might need 10 tons of tension on the halyard and 30 tons on the forestay. With a Structured Luff headsail, you would restrict forestay sag to the same extent with approximately 13 tons of halyard tension, but potentially as little as eight tons on the forestay, so there is a total compression reduction of almost 50 per cent.’

Put another way, many superyachts operate their jib locks well below their maximum safe working load. ‘So, another option in the retrofit world is that by taking just 30 per cent of extra load into the Structured Luff jib, suddenly two metres of forestay sag is down to as little as 500mm. That is a huge gain.’

Sail management also becomes easier, with crews relieved of trying to manhandle removable code zeros or staysails with large diameter cables. One superyacht owner, for example, only used his code zero for racing, leaving it in the container ashore while cruising because it was too big to go into the lazarette.

With cables down to a third of their original size (or completely eliminated), the new technology code sails and staysails flake easily and stow in the lazarette, which in turn allows them to be in constant use while cruising, improving the enjoyment and efficiency of the boat.

In some applications, Doyle’s designers have targeted forestay compression reductions by as much as 50 per cent. The immediate implication is that forestay sizes can be dramatically reduced. ‘On a superyacht, you could potentially reduce forestay diameter by as much as 75 per cent,’ Sanderson says.

The benefits quickly cascade to other areas. In percentage terms, the mast does not receive the full benefit of the forestay load reduction, but Sanderson argues that even a 20 per cent reduction in mast compression creates a virtuous cycle which would produce a quite different boat.

In racing applications, Sanderson envisages trimmers learning new skills as they play with the ratios between forestay and tack tensions to adjust sail depths. ‘It is almost a little bit backwards,’ he says. ‘If you want the sail fuller, then you have the forestay tighter relative to the jib luff and vice versa.

‘Some classes specify a fixed forestay tension and some rating rules heavily penalise adjustable forestay tension. In that case, you can just vary tack tension to change the ratio.’

Structured Luff development for mainsails is still in its early stages. While the gains from a rig standpoint might not be quite the same as with jibs, there is distinct promise. Taking a square top mainsail on a Maxi 72 as an example, if you add a lens with a specific fibre layout along the luff loadline, you can redistribute the loads. When sailing upwind, by adding compression on the luff, the clew and therefore the mainsheet load would drastically reduce while still achieving the same degree of mid-leech twist.

‘A ram at the mast capable of adding more cunningham tension may not cost much extra weight in the middle of the boat, while a different mainsail structure that allows you to significantly reduce the mainsheet load means you can cut back on the size of travellers, cars and winches in a more weight-critical area of the boat.’

Sanderson concedes that by making the sails carry so much more of the load themselves, their weight does increase. ‘But the weight gain is totally disproportionate to the advantage gain,’ he says. ‘We are talking about a 30 per cent reduction in compression loads on the rig, with the massive trickle-down effect that has on the rest of the boat, and we are only talking about an increase in sail weight of a few kilograms.

Above: the supermaxi Comanche fully powered up flying a cable-less J-0 and storm jib staysail from Doyle. The initial performance gains for superyachts are especially huge as luff sag becomes such a major issue on the much larger yachts.
Below: it works on smaller boats, too. This latest brand new suit of see-through Doyle sails on the MC38 Lazy Dog is the state of the art in Structured Luff sail technology 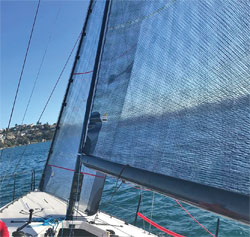 ‘Effectively, we are talking about tons gained in exchange for kilograms spent. If you add just two to three kilos of fibre into a Maxi 72 sail, it represents a huge increase in dpi. The reality is that the weight increase is quite insignificant compared with the load reduction.

Sanderson says the Structured Luff technology evolved directly from investigating how to make Doyle’s cable-less sails work in a wider application. ‘It is a little bit embarrassing,’ he admits, ‘because we really just stumbled upon the cable-less idea.’

This came from IRC code zeros Doyle Sails built several years ago, where they dispensed with a luff cable and introduced the lens concept, enabling them to achieve the required 75 per cent mid-girth measurement by adding area to the leading edge of the sail.

As the apparent wind came forward, the leading edge folded back on the leeward side, effectively reducing the mid-girth measurement to about 62 per cent without breaking the rule. ‘We were blown away by how the luff stayed on the centreline,’ Sanderson recalls.

‘When we took bow-on photographs, the sail was standing upright. It was a bit of a head-scratcher. The concept of the luff folding certainly upset some people at the time.’ Sanderson shrugs. ‘It is our job to come up with ways to win regattas within the rules.’

Sanderson says the market reaction was interesting. Rival lofts started out by dismissing the concept, but many have since attempted to imitate it. ‘It has been a fantastic opportunity for us. Boats where we never had a look-in before came to buy our code zeros. Then, when they found they enjoyed dealing with us, we got an opportunity to talk about the rest of their sails.

‘At the Maxi Worlds this year, the first three 72s were using full cableless code zeros and genoa staysails. Bella Mente was using a spinnaker staysail as well. It has certainly been a big deal for us as a brand, but we have to keep leading the charge as much as possible.

‘While others are playing catch-up in code zero world, we are moving on, which is where all this Structured Luff innovation has come from. There is still a long way to go with it.’