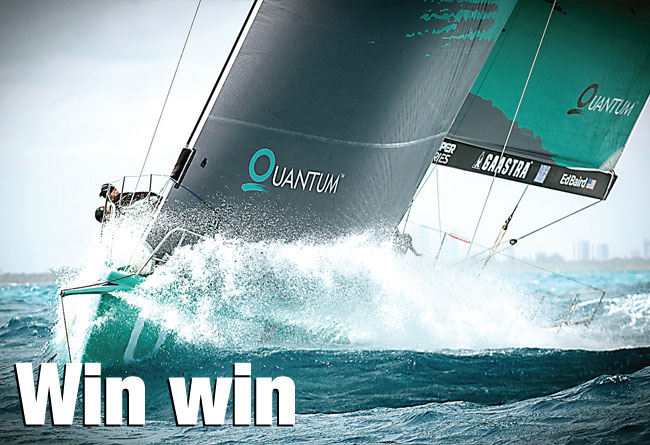 We are in Miami Beach City. The sun is out, temperature is in the high 20s and racing conditions are excellent. Quantum Key West Race Week was only five weeks ago. There Quantum herself was helmed by her owner, Doug DeVos, to a convincing win. I guess that after last year’s Key West, in which Doug and his team did not get on the podium, pride and relief were there this time in equal measure...

Miami has seven teams at the start and without a doubt the strongest presence ever of IRC52 Wild Card boats. Vesper now sports a taller rig and carbon rigging, optimised sail matching a longer bowsprit to hit the maximum Wild Card IRC TCC limit of 1.388. Equal to Interlodge and Sled. The regular TPs by comparison have TCCs ranging from 1.383 to 1.385. The differences arise from not having carbon rigging (this changes in 2015), displacement differences and sail area differences (the IRC52s currently sail with kites that are 5 to 10m2 larger although the two will be equalled from May 2014 when the TP52s go up to 270m2 and 9m STL).

In the end the 5pt variance in rating, which relates to about 17 seconds per hour, rarely leads to position changes but certainly in some conditions it helps to have a boat that is marginally more powerful, whether going upwind or down.

We should not forget that the Wild Card was introduced to keep the older TPs competitive – not to support development outside the class rules and certainly not to promote a rating and optimisation war. As class manager I cannot resist a wry smile every now and then when I hear comments on the dock about how fast some of these IRC52s are, and hardly ever the observation that the results show that it is very difficult to produce a more all-round 52ft boat than a TP, something that is supported by race results.

The Wild Card rule, if intelligently exploited and controlled, makes our events harder to win for everyone; as there are hardly any weak boats any more the racing is closer. A mistake can cost a lot of places and they are harder to claw back.

I see no other way to get older boats to match the new ones than helping them to match the newer boats ‘on average’; it is impossible to make them equal in all conditions. The consequence is that a ‘senior dog on steroids’ may have its race and sometimes its day. But rarely it leads to having the event, let alone the series for reasons other than good sailing. Surely this leads to more dogs fighting for the bone, boats keeping their value longer and less pressure to get a new boat to stay in touch with development.

The first TP52 built to the 2015 Rule, Phoenix, is now in her final stages of completion (see pg51). Her colour scheme would turn heads on any boat, but certainly it suits this machine. This is a very clean and efficient 100% racing yacht that Marcelo Botín and King Marine have produced.

Now, with some trepidation, it is up to me to temporarily rein in somewhat this extraordinary new lady in order to match her potential to that of the 2014 Rule boats. I am doing this in close collaboration with her designers and Pablo Ferrer, our class measurer.

But in the end I am responsible for getting it right. And right has many fathers in this case. It must not be a matter of getting it equally wrong and frustrating those who sail her or those who race against her. In short, her draft will be reduced by 15cm by sinking her fin into the bulb, she will race 200kg over her designed weight and her vcg will be equalled to that of her competitors’ by careful positioning of internal ballast.

Then, in 2015, as a true phoenix, she will arise from her 2014 trim ashes and we will see her full potential. It is very much up in the air still how many new boats will be there to line up with her. I will keep my powder dry by simply suggesting between six and nine. Combined with at least three of the older boats, that should get us 10 boats racing in the 2015 Super Series. Not too shabby.

On shore the 52 Super Series is vigorous in searching out partners who believe in the product and its commercial possibilities. Right from the start Marc Blees of Gaastra Pro has supported us with event clothing – racing himself at one of our events. A month ago the Super Series CEO, Agustín Zulueta, announced Zenith, the well known Swiss watch manufacturer, as 52 Super Series official timekeeper, and most recently he confirmed Barclays Bank as 52 title sponsor for the European Super Series regattas in 2014.

This brings another dimension to our events. Both new partners are very much interested in the hospitality options that visiting a high-quality sports event in high-quality locations open up. The trick is to respect both the privacy that yacht owners like to have, whether racing or ashore with their crew and family, while making our guests feel at home as they experience the racing and event atmosphere. The ultimate is being offered the chance to be onboard a boat when actually racing. The reward for the crew is the broad smile that I have witnessed so often when the guests come ashore after racing.

Soaked to the bone and sunburned, never mind. They have just been at the centre of a top-level sporting event and at first hand have experienced the highs and lows of racing and how a crew communicates and tackles each and every situation. Something to remember and talk about long after the follow-up dinner at the yacht club that normally will not open its doors to you.