Bang (and knots) for your buck 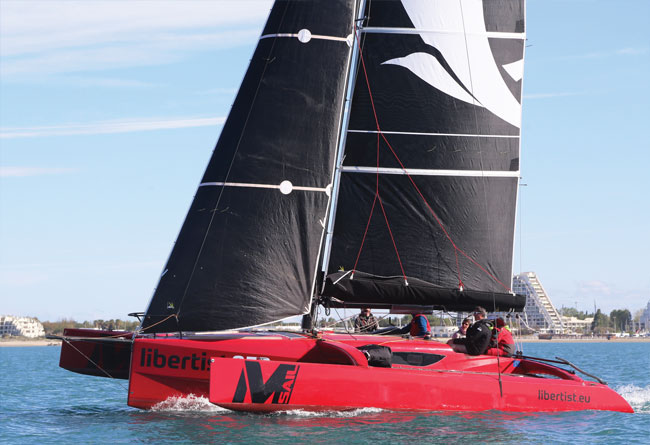 We do not need to be sold on the abilities and advantages of the well-designed and built pocket performance tri... this one will even leave you with enough change for lunch

Founded in 2015, Libertist Yachts based in Poland has been making a big impression in the multihull world following the launch of the first in its range of new racer/cruisers.

Over the last decade, multihulls have attracted plenty of attention. In the high-octane grand prix multihull world, hydrofoiling cats with their complex, multi-section, articulating wing sails and blistering speeds have stolen the show. Yet while their outstanding performance has drawn big crowds and huge interest, there is little doubt that this is the leading edge of the sport and difficult to exploit for all but the world’s top professionals.

At the other end of the scale in the multihull cruising arena, much of the recent development has been based around maximising internal volume to achieve cruising cats that offer more accommodation than a city apartment within a multi-storey superstructure that towers above the water’s surface.

For those that want to enjoy the performance benefits of a light and nimble modern racer/cruiser multihull that has some simple yet practical accommodation, neither end of the scale fits the bill. But a new range of high-quality performance trimarans from Libertist Yachts could help to change all of that.

Built by Rega Yachts in the southeast of Poland, the impressive, modern facilities that include full CNC machining for hulls and decks, are well-known within the boatbuilding industry having been used to produce boats for some of the world’s top brands for 20 years.

Main picture: the Libertist 853 is a nimble and modern racer-cruiser trimaran with a powerful but still easily managed rig, a practical interior layout and sensible offshore passage making potential. Hull number one, pictured above, has a rotating carbon wing mast and a generous square-top mainsail

Tapping into this longstanding reputation for affordable, high quality boatbuilding, Libertist Yachts have been able to create a new brand that is Polish from front to back. Adding further pedigree to the new marque, the range is designed by one of the world’s leading multihull designers, Frenchman Erik Lerouge. The first of this new and exciting range of sport trimarans is the Libertist 853.

At just 28ft LOA she is a modestly sized boat, yet one that has been created to be highly versatile and easily transportable within European towing regulations that set a maximum beam of 2.55m.

For Lerouge, the Libertist 853 is the latest iteration of his popular cruiser/racer concept that began with a 26ft trailer-sailer trimaran that has not only proved popular over several decades, but set a benchmark in the multihull world. So, while the core objectives remain the same in providing an affordable and easily managed performance trimaran, the application of modern design and technology aboard the Libertist 853 has raised the game once again.

On the face of it the 853 is a modest looking racer/cruiser; however the introduction of fixed foils in the sponsons represents a big step forward.

‘Having experimented with foils for quite a long time, I am obviously very much aware of their advantages and limits,’ says Lerouge. ‘A cruiser/ racer needs all-round performance and its power to weight ratio would achieve full foiling in a very limited range of wind speeds and angles. In addition, the cost of a fully foiling package would kill all chance of selling the boat.

‘Our choice has been to add fixed minifoils to an otherwise conventional trimaran configuration. They will not need to be adjusted, they will provide lift at speed and should significantly reduce pitching and nose-diving. This also has a positive effect on the float design which means that they can be slimmer and lighter.’

Under way, when the breeze starts to get into the teens and the boat accelerates, this effect can be felt clearly as the leeward foil provides additional righting moment as it powers up the boat.

In addition, the forward position of the foils ensures that the tri lifts her bows rather than burying them when pressed hard in a stronger breeze. The upshot is that the Libertist 853 drives along at 14kts under spinnaker in just 8-12kts of breeze while feeling perfectly trimmed fore and aft. Indeed, it is this fore and aft balance that allows her to feel comfortable in much stronger conditions. In a recent boat test, she achieved 11kts to windward in about 20kts of true wind and clocked more than 22kts in conditions that saw gusts of 30kts.

Such characteristics go a long way to demonstrating how both speed and stability are at the heart of this new pocket rocket. But achieving this kind of performance through hydrodynamic lift is not simply about adding a set of foils. Achieving the correct balance and trim throughout a wide range of conditions requires the appendages to work together. They also needed to be attached in such a way that there could be no risk of misalignment that might result in incorrect trim of the boat.

‘It is not about flying, but simply increasing power and safety at high speed by controlling the float's pitch. With a marked dihedral on the minifoils, we also needed to have a rudder under each float for optimum control,’ Lerouge explains. 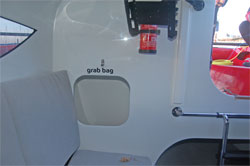 Above and below: it may not be fancy, but the main hull provides all of the creature comforts an adventurous crew needs to cruise far and wide. A chine just above the waterline helps give just enough volume for a cosy double berth (or a generous single) while the wide platform and narrow waterlines ensure good performance. The 1003ʼs cabin layout comprises two berths fore and aft plus a linear galley facing a dinette with u-shaped seating amidships. Thereʼs also room for a compact heads, two hanging lockers and an anchor locker in the bow. Genuine pocket pleasure! 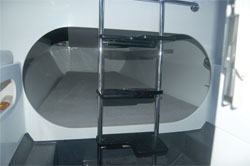 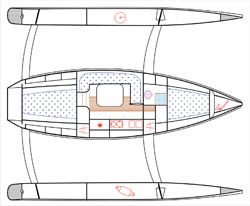 Above the waterline her carbon rotating wing mast and composite rigging is light and efficient. ‘With this new design we wanted to improve performance when compared with previous generations of trimarans and stepped a high quality rig on the first built. She has a rotating carbon wingmast, composite rigging and square top sails. The jib is selftacking with one reef and there is a choice of Code 0, 5 and asymmetric that can be flown from the masthead or the hounds.’

But while performance is at the heart of this design, she is also designed to be manageable in the real world where the capability of completing offshore passages safely puts additional pressure on her overall design. Providing good sea-keeping qualities when the going gets tough was every bit as important as creating a boat that could be easily handled in port.

‘The object was to provide ultimate buoyancy for a given length. Having to sail back from Corsica against a Mistral, or from Ireland with a deepening low pressure system approaching concentrates the mind,’ continues Lerouge. ‘Our experience tells us that harbour berthing or mooring means crawling to the end of the floats, therefore we limited the camber on the foredecks.’

When it comes to her construction, building the 853 at Rega Yachts ensured that she would be built to a high standard in a world renowned facility alongside boats almost four times her length. The technical benefits and manufacturing muscle power of this approach were considerable where the accuracy and efficiency of the construction guarantees a boat that is not just robust and down to weight but also good value for money.

Built in a female mould the 853 is an epoxy foam sandwich construction for her hulls and decks with carbon cross beams. Accurate weight control and the correct resin/fibre mix is achieved using the company’s proven infusion system. The result is a boat that weighs just 1,400kg. Such light, efficient hulls allows an equally efficient auxiliary propulsion system in the form of a 6kW electric motor.

For those more conscious of cost, a less expensive version of the 853 is available using isophthalic polyester resin for the hull and deck with an aluminium mast. The sail-away price starts at €130,000 including VAT.

Either way, throughout her construction she is simple and effective with a comfortable yet unfussy interior that puts practicality at the top of the list. Evidence of this is her ample 1.8m headroom below decks along with an impressive feeling of space thanks to the internal volume that is achieved through the clever use of a hull chine which also serves to make her a dry boat on deck.

But the Libertist 853 is just the start. A smaller sistership, the Libertist 703 is already in production. Designed to fit within a 40ft container, the 703 has folding sponsons that will allow her to reduce her beam to 2.55m for towing as well as fitting into a 9 x 3.10m monohull marina berth.

Further up the size range two more models, the 1003 and the 1203 are currently in design ensuring that the Libertist range is well on its way to delivering robust, performance multihulls that are easily managed, whatever their size.