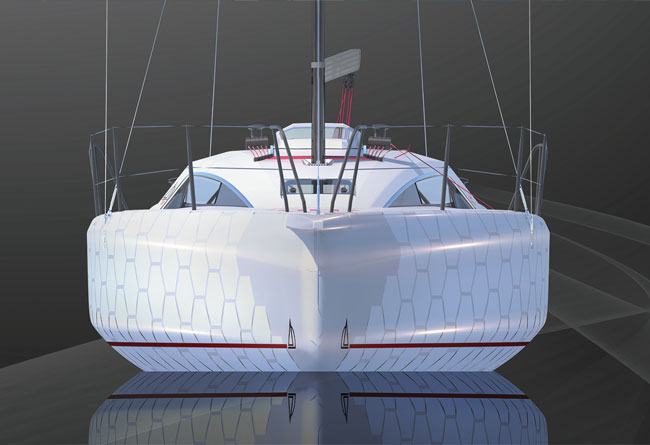 It’s been a fair old while since Dehler Yachts launched its last racer-cruiser, as opposed to the cruiser-racers that have come to define the marque. Now they’re at it again with a waterballasted, carbon-rigged 30ft (9m) offshore one-design that is already in production and due to launch soon after this issue of Seahorse hits the newsstands.

Readers with long memories will remember just how good Dehler used to be at this sort of thing. Their Sprinta Sport was a top IOR quartertonner back in the day and hot on its heels came a pair of impressively fast, well-engineered three-quarter tonners, the DB1 and the DB2, which won a world championship with Karl Dehler and Torsten Conradi – now managing director of Judel/Vrolijk – on board. The cruising version of the DB boats, the original Dehler 34, was an extremely successful model with 1,200 built over 10 years and is now regarded as a modern classic.

Thirty-eight years on, the concept for new Dehler 30 One Design was conceived in conversations between Hanse Yachts’ boss, Dr Jens Gerhardt and Karl Dehler, who subsequently headed up the project team for the new boat. Conradi’s team at Judel/Vrolijk were the obvious choice to bring on board as naval architects, including Matthias Bröker, who has drawn some very fast TP52s, and raceboat interior specialist Ann Cathrein Jacobsen. Further expertise was drafted in from Rostock-based Speedsailing, including the ORMA 60 and Volvo veteran Felix Hauss. The new boat is optimised for solo and shorthanded, medium-range offshore racing – hence the water ballast – and is aimed squarely at Baltic regattas such as the Vegvisir and Silver Rudder.

At first glance, the Dehler 30 One Design looks more like a no-compromise racer than a racercruiser. The hull has chamfered shoulders, hard-chined aft quarters and a very shallow canoe body, a 2.2m T-keel, dagger-like rudder blades and prodigious beam carried all the way aft. The moderate scow bow is designed to generate dynamic buoyancy while surfing, but also to cut through steep head seas. Structural stiffness and strength are assured by the Dehler Carbon Cage, which is bonded and laminated into the hull. The keel fin is a hollow, lightweight aluminium extrusion with a 900kg lead bulb bolted beneath.

Main picture: it’s the raciest Dehler since the world championship winning DB2 three-quarter tonner, launched almost 40 years ago – and it’s Dehler’s first one-design, aimed squarely at major Baltic regattas for shorthanded and solo racers such as the Silver Rudder and Kiel Week. But most importantly, the Dehler 30 One Design looks like it’s going to be an enormous amount of fun to sail

There’s a long bowsprit up front and a very tall carbon rig with a fathead mainsail and a Class Ministyle reefable jib on piston hanks instead of a furler. The 13.18m mast height is the absolute maximum allowed by RCD Category A, which, combined with a displacement of 2.8 tonnes, should deliver very lively performance indeed. Judel/Vrolijk’s polars predict exceptional performance for a pocket offshore racer, particularly in light airs: 6.5 knots on a reach and 5.5kts when hard on the wind in just 6 knots true. Offwind in a decent breeze with a gennaker set, speeds of 11 to 14 kts are expected.

All of that said, this is a dualpurpose boat. The deck plan is designed for easy handling, with safety at sea a prime consideration. The interior is practical and comfortable, with everything you might need for a week-long family cruise. The cabins should stay dry on passage as the mast is deck-stepped and there’s no through-hull aperture for the bowsprit, which can be removed when required (for berthing or cruising use) in a few minutes by unscrewing four bolts. Stowage is well thought-out, in the cockpit and down below.

As with all Dehlers, what distinguishes the 30 OD from comparable boats is the wealth of clever design features, excellent ergonomics and outstanding attention to detail. In the cockpit, individually adjustable footrests keep the helmsman sure-footed in lively weather. Cushioned non-slip pads with efficient thermal insulation are bonded to the cockpit benches and sole. The mainsheet traveller runs across the full width of the cockpit aft of the helm and offers both 4:1 and 16:1 purchases.

Above: note the long bowsprit and the mast stepped quite far aft for a balanced sailplan... but also what’s missing from the picture – the invisible propeller and prop shaft. The Dehler 30 OD is the first production boat to use the Bieker Stealth Drive, which folds up inside the hull when not in use. The interior is designed first and foremost for sea-going practicality but also feels spacious for a raceboat.

The steering system is entirely external – none of the components are hidden – which makes a lot of sense for maintenance and gives the reassurance of being able to check the integrity of the whole system at a glance. The liferaft locker is designed for instant deployment and an easyaccess rack at the stern holds all of the boat’s safety gear, ensuring that the lifebuoy and EPIRB can be deployed in just a few seconds.

One of the most interesting features of this remarkable boat is out of sight below the waterline: the Dehler Stealth Drive, a fully retractable drivetrain controlled by a lever in the cockpit. Under sail, the shaft and propeller are sealed inside the hull, which not only eliminates drag but also has the major benefit of making it impossible to snag the prop on fishing gear or other flotsam. Under power, the prop and shaft drop down to deploy and their cover acts as a protective skeg. The Stealth Drive was invented by Bieker Boats and modified by Dehler for series production. All previous Dehlers have had folding propellers but the 30 OD can have a more efficient and powerful fixed prop instead, without any compromise in performance. All boats will be fitted with a 10hp Nanni inboard diesel.

The companionway hatch is an intriguing throwback to the ocean racers of the 1980s with a 3D window that gives an unimpeded 360° view of the horizon, deck, cockpit and rig from inside the boat, enabling the crew to maintain an effective lookout from down below while monitoring sail trim. There’s ample headroom of 1.93m (6ft 4in) beneath the hatch, reducing to 1.68m (5ft 6in) under the mast.

Below decks, the accommodation is laid out with seagoing practicality in mind. Under foot, the cabin sole has the same warm, cushioned nonslip that’s used in the cockpit. The shallow bilge contains a flexible water tank and lightweight lithium-ion batteries. Aft of the companionway are two spacious quarterberths, comfortably padded and ideal for use at sea. Between them is the engine compartment with easy access to all service points from both sides via the quarterberths.

To starboard of the companionway is a compact but well-equipped galley with gas hob, worktop, chopping board, sink and tap, 12V socket, space for a cooler and stowage for food and utensils in zippered textile bags. To starboard is the heads. A fabric screen folds out on flexible hinges to separate the toilet and its holding tank from the saloon – a weight-saving design derived from the aerospace industry.

One step forward is the saloon with a drop-leaf table and oak bench seats whose cushions double up as padding for the sides of the forecabin. Apertures in the E-glass sandwich bulkheads and an open plan layout create a sense of space. In racing mode the forepeak is a large sail locker; in port or at anchor it transforms into a generously sized double berth. Right up front, the sealed collision bulkhead is another reassuring safety feature with a watertight hatch to allow easy inspection and maintenance of the forestay chainplate.

To further boost the boat’s appeal, Hanse/Dehler is planning a strong class association with strict onedesign rules (but a choice of three sailmakers) and Karl Dehler himself as its technical manager. There are plans to establish a racing circuit in the Baltic, based on existing regattas such as the Seapilot 2Star, Nordsee Week, Round Skagen, Kiel Week, AF Round Gotland, Warnemünder Week, Travemünder Week, Sydbank Cup and Silver Rudder.