Twenty years on (and still king of the hill) 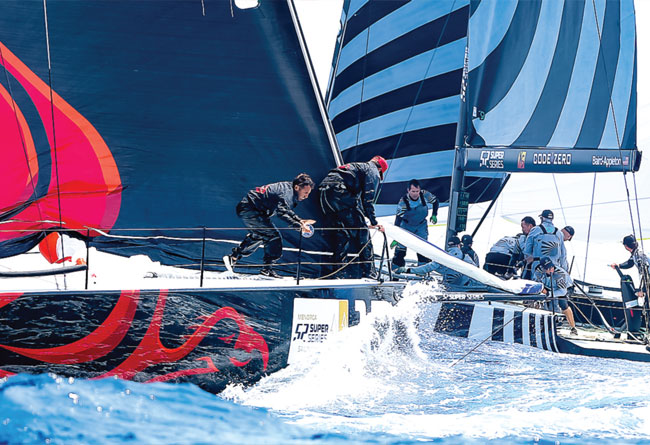 A breezy, adrenalin-pumping Cascais marked the mid-point of the 2019 52 Super Series. Day in day out the action was so close that it was often genuinely breathtaking, both in terms of the skill of the crews and also of the standard of preparation that allowed these ultra-refined boats to race within inches of each other in tough conditions without a single technical failure. Also remarkable at this level, seven boats won at least one race, while at the end just one point separated winners Quantum Racing from runners-up Azzurra. In third and fourth Platoon and Bronenosec were tied on points, with the countback favouring the German-flagged crew.

Big breezes and big waves make it relatively easy to reel off a big race-winning margin, yet once again a Super Series regatta was decided by seconds – two seconds in Cascais following by four tiny seconds that decided the winner in Menorca.

Ironically it is the Roemmers family’s former champion Azzurra that has twice recently missed out on regatta titles, each time falling just short. But, as helm Guillermo Parada noted through gritted teeth in Cascais, Azzurra are almost happy to trade those wins for the 8pt overall lead they hold as the five-regatta circuit reverts to the Med, and to the team’s preferred summer sea breezes in Puerto Portals. And with Quantum exorcising a distinctly duff Puerto Sherry result by winning in Cascais, with new tactician Cameron Dunn starting work at a venue where he immediately looked comfortable, it is looking like an unprecedented four or even five-way title shoot-out at the concluding round in Porto Cervo in October.

Vladimir Liubomirov’s Bronenosec team launched their new Botín design just three weeks before the season’s first regatta in Menorca where they were fifth… but they also won the first race of 2019. Come Puerto Sherry and then Cascais, on both occasions they were in with a shot at the overall win at the start of the last day. In Andalucia they lost out by one point and in Cascais the podium only eluded them on countback.

This crew, ably led by manager Alberto Barovier, is the revelation of the season – and success is not simply down to having the only new boat in the fleet. Theirs is a particular chemistry that blends the steely desire to win of silver-haired, super-experienced Barovier and that of young Croatian Olympic 470 champion turned 49er World Champion Šime Fantela – working alongside unflappable American tactician Morgan Larson. A happy, high-functioning team and a very happy owner. Significantly, Liubomirov has given up some of his helming duties to poster boy Fantela, who came into the team with no track record in big boats but also little baggage and no ego.

Main picture: Tina Plattner’s 2014 Botín design Phoenix 12 chases a fast gybe-setting Quantum Racing during the Menorca round of this year’s Super Series. Neither boat would particularly shine at the opening regatta of 2019 while 2017 champion Azzurra could only finish fourth. But two rounds later and Azzurra would go into the world championship in Mallorca leading overall and a full 8pt ahead of Quantum. As with a Maxi72 and otherwise very different Imoca today’s highly complex racing yacht needs considerable playing in…

‘Ours is a fresh boat in terms of the internal structure which we have been able to update. That gives us a small advantage, mostly through the extra headstay tension we can put on, nine tonnes compared with eight on our previous TP52. That is particularly good in flat water which is where our main edge is,’ explains Barovier. ‘But in terms of hull shape we are a virtual sistership of Quantum.

‘Cascais showed an amazing quality of boats and sailing throughout the fleet. Our weakness, such as it was, was not having sailed together in the Cascais conditions, 25kt and waves. But our strength is there are no rock stars, no egos, there is not someone making the rules. So we learn together and learn quickly. Šime and I are aggressive, impatient and hungry to win. Balancing that, Morgan is just very cool, very relaxed… but he still has plenty to say!’

So how did they settle on the hugely talented but inexperienced Fantela to assume much of the responsibility for steering? ‘We had been trying for three years to be more competitive,’ says Barovier, ‘always changing crew and having different ideas for the roles onboard. This was something we could try that was completely new. Vladimir quickly took to the idea of sharing the helm with Šime mainly because he is young. This is a three-year programme at least and Šime has the Olympics in the middle of it, so there is every chance of him getting better – and better steering too.’

Having previously raced with the ClubSwan 50 and 601 and the RC44, this year Liubomirov is devoting his energies to the Super Series but will still fit in the ClubSwan 50 Worlds in Sardinia. ‘Vladimir may appear reserved and quiet but he has a huge passion for this. He has put a lot of trust in me and so I am pleased we have proved competitive... and have a happy boat. Vladimir is especially happy to see us doing better and, just as important, he is learning too.’

After a slight dip in numbers in Cascais, due to owners wanting to race the NYYC 175th Anniversary Regatta in Newport, 11 TP52s are entered for the upcoming Rolex TP52 Worlds in Puerto Portals.

Meantime, 2020 takes shape slowly but already looks as if it may be the most interesting TP52 season ever. ‘With 10 boats already confirmed for the two 2020 events in Cape Town, we are now considering hosting the 2020 Rolex TP52 Worlds as the second of those Cape Town events – and with two other boats interested we may yet get to 11 or 12 boats,’ said class manager Rob Weiland.

‘In addition, interest for the TP52 20th Anniversary Invitational next year is already overwhelming. The plan is to invite the owners of TP52s and IRC52s who are not already racing the 52 Super Series to join one of our 2020 regattas. This could result in a magnificent event for these boats, revisiting the opportunity to enjoy startlines of 20+ boats and “big fleet” grand prix racing.

‘This should truly do this TP52 milestone justice. Who ever thought we would live to see the premier inshore racing fleet in such good health 20 years after the start of the story?’
Andi Robertson