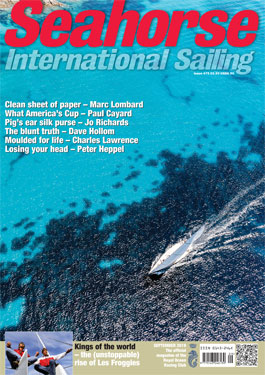 Days, weeks, months…
JO RICHARDS spent a while winning the 2019 Round the Island UK classic but – as per usual – getting to the startline was more than half the fun

Airborne (and accessible)
The demise of the long-running Extreme Sailing Series is doing the expanding GC32 Racing Tour no harm at all. CHRISTIAN SCHERRER

Time to revisit
As the big-catamaran offerings proliferate, are out-of-date preconceptions holding back similar growth with three hulls? MARC LOMBARD

Under the sun…
With another America’s Cup class reset have we nailed down the history books or might we be missing more useful clues? DAVE HOLLOM

What’s not to like?
Do your Caribbean planning Seahorse-style

Update
Why is there still one critical danger to the sport that people refuse to talk about? New Cup class means big sail burn, reflections on a year spent Solitaire and good, bad or irrelevant… another thin cycle for America’s Cup teams. PETER HEPPEL, JACK GRIFFIN, TERRY HUTCHINSON, WILL HARRIS

Sailor of the Month
Peerless champion or enthusiast par excellence?