Oiled wool and waxed cotton... not so much 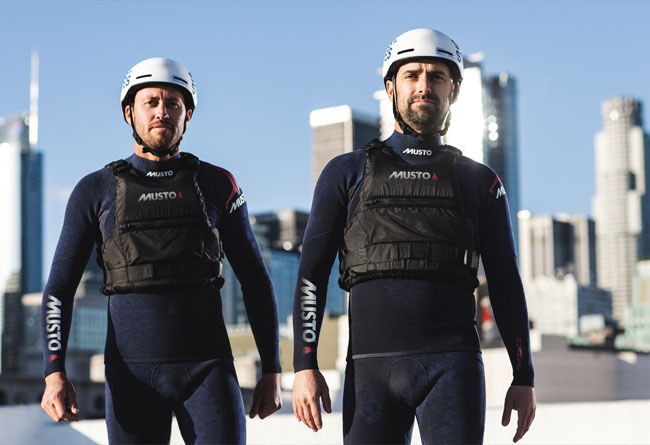 It says a lot about how much the America’s Cup has changed in the past decade that Musto will be supplying the Stars & Stripes team with gear not from its yachting apparel, but from its dinghy range of technical clothing. Musto is the exclusive official technical sailing apparel sponsor of Stars & Stripes, challenger for the 36th America’s Cup presented by Prada, and Musto’s design team can’t wait to get stuck in.

The jump-off point begins with the work lead designer Shane Rhone and his team did with Franck Cammas and Groupama Team France for the 2017 Cup in Bermuda. ‘That was a very interesting and challenging project which sets us up well for the work we’ll be doing with Stars & Stripes this time round,’ Rhone says.

For Groupama, Musto teamed up with D3O. ‘They’re the Gore-Tex of impact protection,’ Rhone says. ‘They make some of of the most trusted and advanced impact protection technologies on the market.’ D3O has developed its own patented materials which in their raw state flow freely when moving slowly, but on impact they lock together to absorb and disperse energy, before instantly returning to their flexible state. The greater the force of the impact, the more the molecules lock together and the greater the protection. D3O materials are used in kit worn by the US military, pro athletes in many contact sports including American football, and three Formula One teams.

For Groupama the sailors were armed with 16 impact protection pockets: one for the spine, one for the coccyx and two each for elbows, forearms, shoulders, hips, knees, shins and upper side thighs. Since then Musto has brought out its “Foiling” range of high-tech clothing for high-performance dinghy and small-boat sailors, which has been a godsend for sailors of foiling boats such as the Olympic Nacra 17 cat, where the injury count from impact has been worryingly high.

Main picture: the co-founders of the Stars & Stripes America’s Cup team, Mike Buckley (left) and Taylor Canfield, for whom Musto is designing a new range of technical clothing with built-in body armour. ‘The crashes can be hard and they can hurt,’ Buckley says, ‘so we need plenty of protection while still retaining full movement and flexibility’

Amazingly no major injuries were sustained during the 2017 Cup in Bermuda, albeit there were a few hairy moments such as Emirates Team New Zealand’s dramatic pitchpole, and that pre-start clash of hulls between SoftBank Team Japan and LandRover BAR.

Taylor Canfield, a co-founder of Stars & Stripes, has experienced the power and adrenalin of these AC50 catamarans now that they have been converted and souped-up into F50 one-designs for the new SailGP circuit. ‘The F50 is an amazing platform for stepping into this kind of sailing and getting ready for the next Cup,’ Canfield says. ‘Getting used to sailing at 45 knots is a challenge in itself. It has been a huge help joining that team and great to be alongside Rome Kirby, who's got a lot of great experience and two America's Cups under his belt. In addition to that, we have two GC32s from the Extreme Sailing Series in Long Beach and we’re out on the water every day and working hard to get as much foiling experience as possible.’

Foiling is undoubtedly fast, but it can also come to a halt crashingly quickly, says Stars & Stripes co-founder Mike Buckley: ‘The crashes can be hard and they can hurt, so we need the protection whilst retaining full movement and flexibility. The challenge is making sure that the sailors wear gear that will allow them to be operating at an extremely high level of athleticism. On the AC75, there'll be eight grinders doing very hard, uncomfortable work, and it will be vital to keep them at the right temperature while also making sure they’re protected from impact. Then there will be three or four sailors on the “speed team”, whose needs are different as they're not operating at 100 per cent heart rate the whole time. For them it will be a little closer to traditional sailing, but low windage is another important component, along with safety and comfort.’

It’s a tough design challenge making kit that will tick all those boxes but Canfield is very happy to be working with the global leader in performance sailing clothing. ‘Musto is best in class. If it’s up to the sailor what they wear, they’ll choose Musto. I feel honoured that we’re working with them because they are the best at what they do.’

Stars & Stripes media manager Matt Knighton was onboard reporter for Abu Dhabi Ocean Racing when Ian Walker’s crew won the 2014-15 Volvo Ocean Race. ‘We were wearing Musto for that circumnavigation so I’ve got personal experience of what it’s like to work with these guys. Musto has always done a really good job partnering with the athletes. During the Volvo they were at almost every stopover asking how they could make their garments better. Whether you're sailing offshore, racing the America's Cup or sailing in dinghies, it's all about staying dry and comfortable, at the optimum temperature. And that’s what Musto works so hard to achieve.’

A big part of Musto’s success over the years has come through its close partnership with Gore-Tex. Now Shane Rhone sees that a major part of their success with developing highperformance gear for speedsters such as the Stars & Stripes sailors will come from the partnership with D3O. ‘They are the industry standard for impact protection,’ he says. ‘They set the pace for everyone else to follow. A lot of companies do their own version of impact protection, but they never catch up. D3O are pushing ahead in so many interesting areas; they have worked on creating lighter versions of impact protection, to help with the venting and breathability of pads. They recently showed us the work they’ve been doing with a Japanese motorbike brand, where they have custom made some carbon-fibre plating, which looks super modern, and is basically bulletproof impact protection.’

Above: A recent product innovation from D30 is Impact Print, which allows impact protection material to be printed directly onto a fabric.
Below: D30’s LP2 Pro limb protectors are among the most advanced, breathable armour now available for motorcyclists and mountain bikers. Similar protection for sailors is now in development

Chris Meadows, technical sales manager at D3O, says there is always a compromise to be found in impact protection, but D3O’s materials and products bridge that compromise more effectively than anyone else. ‘There are other products out there, but if they protect as well as D3O they won't be as comfortable, and if they're as comfortable as D3O they won't provide as much protection.

‘Something we’re working closely on with Musto is to find the best way that our material can be integrated into their suits, in terms of making it flexible and comfortable. Where we've done well in the motorcycle market is not only have we provided good impact protection, but it's a lowprofile, comfortable solution that people want to wear and which enables them to move freely. Nowhere is that more important than on a boat. If you've got a protective solution that stops you moving, you just won't wear it because you won't be able to do your job on the boat. That's where our materials and applications already excel in other markets and we believe we can make a difference in sailing, too.’

The Musto project is close to D3O CEO Stuart Sawyer’s heart. A pro windsurfer back in the sport’s heyday 30 years ago, Sawyer is a keen keelboat racer these days. He’s won the Vice Admiral’s Cup, the J/111 National Championships in the UK and is currently campaigning a J/122 on the south coast of England. ‘From my windsurfing days I’ve always had that understanding that the last thing you want is to be wearing something that gets in the way of your performance. Out in Hawaii, I used to hate wearing a wetsuit. You didn’t need it for the weather, it was to protect you, but you could really feel it impeded your movement, and your performance would suffer as a result. So I'm always mindful of that when we're working with a global leader like Musto. Our job is to be invisible really as best we can.’

One exciting development out of D3O is called D3O Impact Print. ‘This enables us to print D3O directly on to a fabric,’ says Sawyer. ‘I can see this being very applicable to our work with Musto, in terms of trying to keep the impact protection as low profile, as integrated and as comfortable as possible. It makes it possible to create some really intricate, customised designs where the D3O might start at half a millimetre thick, then build up to 3mm thick at its maximum, and then taper away again to half a millimetre. Whenever the Musto developers come and meet up with our designers I think we’re going to see some very interesting ideas come out of that collaboration.”

While the Stars & Stripes project is a very high-end niche piece of work for Musto, Sawyer can see impact protection becoming mainstream in sailing. ‘We’re all aware of the high loads involved in keelboat sailing and people do get injured from time to time. So the risks are there,’ he says. Seeing helmets being worn in the America’s Cup is starting to break through to the mainstream, for example in the Open BIC dinghy fleet where helmets are compulsory for the kids. ‘The comparison I would draw is with skiing,’ says Sawyer. ‘Just 10 years ago wearing a helmet on the slopes wasn't cool. Now everyone is wearing them, they're very functional, they keep your head warm and some of them look really cool. They don’t get in the way of your enjoyment of skiing whatsoever, you just don’t really think about them anymore. When you’re sailing in 25kts of breeze and your keelboat is doing 18kts and you’re about to gybe, well you know you need to keep your head down because if the boom hits you, it could kill you. So the need is there, and I can see helmets and other impact protection filtering down to the wider sailing world.’