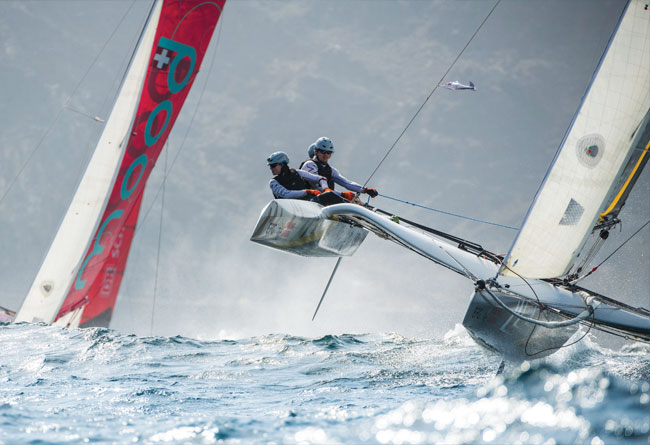 If you want to know how competitive the revamped EFG Sailing Arabia – The Tour was this year ask Volvo Ocean Race champion Franck Cammas... who has just experienced life ‘below the fold’

The new-look EFG Sailing Arabia – The Tour came fully of age in 2019, again delivering early season racing in near ideal conditions for a fleet of highly competitive Diam 24 teams.

‘It has been a phenomenal ride,’ says founder and owner Rodney Keenan, who began sailmaking in 1991 with Lidgard Sails and then worked with Doyle and Qantum.

After seven successful years racing in the southern Gulf region, the Tour underwent a radical reboot in 2018. The long-serving Farr 30 fleet was replaced by the rapid Diam trimaran and the course was reconfigured to focus on the charms and challenges of Oman’s striking coastline.

It was a bold move by Oman Sail but it paid off with great racing, good feedback and most tellingly a larger fleet for the second edition of the refreshed Sailing Arabia in February.

Main picture: the dramatic desert coast of Oman provided a spectacular backdrop and delivered almost ideal racing conditions for the ninth edition of EFG Sailing Arabia – The Tour. The event was rebooted in 2018 when a fleet of Diam 24 trimarans replaced the previous Farr 30 one design monohulls.
Below: ten teams turned out and enjoyed 14 days of remarkably competitive, close-fought racing in five different venues 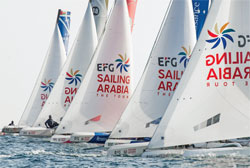 As Oman Sail CEO David Graham put it: ‘Oman is blessed with more than 2,000km of stunning coast, so we thought “why go anywhere else”.’

Ten teams slugged it out over 14 days across five venues, each offering the distinct mix of short and sharp inshore stadium racing and 20km-plus coastal Raids in a mirror of the Tour Voile. The crew list read like a who’s who of Europe’s leading Diam sailors, with many of the top Tour Voile teams making the most of a 24°C early season workout.

When the spray settled, Beijaflore repeated their success of 2018, holding off a determined challenge from Cheminées Poujoulat. Oman Shipping Company skippered by Stevie Morrison took third place by just half a point from Seaflotech. Highlighting the ultra-high competition was the fact that Volvo Ocean Race winner and GC32 champion Franck Cammas’s EFG Bank team finished in sixth place.

With Sailing Arabia – The Tour celebrating its 10th anniversary next year, organisers can confidently build on firm foundations. It also sits alongside the Tour Voile, the Grand Prix Pacifique des Jeux in Polynesia and a proposed Italian event in the recently formed World Diam Tour.

Oman Sail aims to improve its offering to encourage more teams, perhaps including a Corinthian class with a flexible format. Event manager Nico Honor says: ‘On the sport side of things I think we have reached a good standard pretty quickly, and the level of racing has been super-high.

‘One way of developing it further is to have a package that will encourage amateur sailors and their families. We were in touch with a lot of amateur teams who were thinking about coming, but ended up not doing so, and we just need to know why they did not come and what we need to do.’

It’s a conversation welcomed by Phil Cotton, president of the small but active British Diam Class. ‘Diam events now have a professional air, so it is a little bit daunting for UK teams as we are all privateers,’ he says. ‘It needs to be easy to dip into, more user-friendly for non-professional teams. A Corinthian plan could work well, if you could fly in as part of a package and maybe do a week of racing mixed with tourism.’

‘Getting round Oman is not as easy as getting round France so Oman Sail has to make the logistic side happen. They did a great job, it was smoother than last year and with more teams. If you are building towards a Tour Voile it’s a no-brainer. The conditions and temperatures are just cracking.’

Piers Hugh Smith, leader of the amateur Team Maverick who are working on a budget for a future entry, agreed. ‘The logistics package is even something that the Tour Voile itself should consider adopting. We considered Sailing Arabia both years and wanted to go as it was a nicely put together offer that really appealed,’ he says. ‘If the Tour Voile was more like that it would help some of the smaller teams.’

Coming to Oman is a leap of faith for some, and Oman Sail goes the extra mile in response. When high winds ruled out sailing in Sur, race director Gilles Chiori added extra races to the next venue at Masirah Island – cue some memorable sunset sailing. Organisers also laid on a crew trip to the extraordinary Wadi Shab waterfall and caves. You don’t get that at Cowes Week!