Too good to pass up 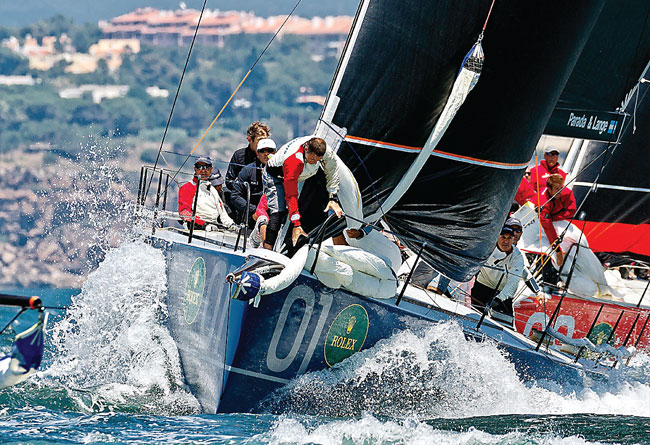 It was supposed to be just two, and only two, 52 Super Series teams convening in Valencia for a little informal testing and tuning. But two became eight and the week of informal tuning and testing culminated in what became known on the old Victory Challenge dock as the FOMO Regatta, aka Fear Of Missing Out.

‘When once we were looking for half a boat length here and there, now it is down to a metre, so every minute we can get afloat counts,’ contends Andy Hemmings, trimmer on Andy Soriano’s Alegre, who along with Sled had planned the Valencia initiative.

Aside from the chance to settle in new crew line-ups, up for testing too were a new Botín bulb and rudder developed for the new Bronenosec, and since fitted to most of the Botín designs, countered by a new keel and bulb for the two recent Vrolijk boats, Provezza and Platoon.

‘Efficiency gains from the new bulb are of the order of 0.7 per cent,’ according to Adolfo Carrau of Botín Partners. At their request Alegre have a slightly different new Botín appendage package while Azzurra opted for a new package from a different source altogether. Most of the boats have also been stiffened structurally over the winter; the internal ballast carried previously was dead weight and so additional stiffness to permit higher headstay loads is a net gain as long as it does not raise the overall VCG.

The timing of the Valencia outing was dictated by the lead time for final sail designs to be built and ready for PalmaVela. So tight is the schedule that there is then no time for changes between PalmaVela and the first Super Series round in Menorca.

Among the key personnel changes Cameron Appleton was finding his feet in Terry Hutchinson’s previous slot as tactician on Quantum Racing, ably supported by Juan Vila who returns as navigator. Seven crew changes for the 2018 champions might otherwise have the vultures circling but only three are actually new to the boat, with Ed Baird returning as helmsman.

Harm Müller-Spreer’s Platoonwon most races in Valencia and was visibly the fastest boat all round. Platoon pair with Quantum Racing in a two-boat data-sharing programme, with Jordi Calafat as sail designer on Platoon and Brett Jones in the same role for Quantum. ‘If there is something specific that Platoon want to keep to themselves then they will do so, and likewise for us, but the reality is that within two or three hours on the water everyone can see pretty much what they have all done,’ smiles Ed Reynolds, Quantum team director.

As with Sled/Alegre and Quantum/Platoon, the quest for marginal gains now sees most of the frontrunners pairing off with a regular tuning partner. Without doubt this means that the 2019 season will start with the fleet more closely matched than ever before.

Main picture: Overall winners of the 2017 series, Azzurra struggled at the start of 2018, settling in a new boat and revamped afterguard after losing regular tactician Vasco Vascotto to the Luna Rossa America’s Cup challenge. Azzurra slogged their way back to third overall by the end of the year – only missing the runner-up slot on a tie-break to owner-driver champion Harm Müller-Spreer and Platoon. But 2018 was a poor year by their own high standards

‘To all intents and purposes this is so refined now it is like racing one-design, except the owners and teams still have those development choices to make… and that is what many live for,’ notes Reynolds, who has been with the Med fleet since its inception in 2005.

Rather than be put off by the never-ending search for perfection, the owners drive the changes. ‘It is the owners who are pushing, for sure. They are all very competitive and love the attention to detail, the tiny gains, the design choices. That is why they are in the TP52 Classand in the Super Series and not in a one-design class elsewhere.’

Carrau contends, ‘And most of all the owner-drivers! They all take a very, very direct interest… especially during the initial stages. Owners like Sled’s Mr Okura –who is famously low-profile –who has now had four boats from us and is always very much involved.

‘With hulls it is easier because it is a bigger volume and so the gains are more significant, but with the appendages after 14 generations it is a lot more effort to find the small gains, the 0.5 per cent that we are looking for. On the one hand, we now have the tools to be able to find these gains, but on the other you have to be sure that the tool is accurate and the 0.5 per cent is actually there.’

If this all sounds off-putting to owners looking to step into the circuit, it need not be. Tina and Hasso Plattner and the Phoenix programme have been competitive from the start. Recall that Tina, with Ed Baird as tactician, very nearly won her first ever 52 Super Series round on her debut in Croatia a year ago. And Eduardo de Souza Ramos and the Onda programme were also quickly up to speed last year as part of the Quantum support package.

Tina Plattner maintains that it is all very do-able for a new owner to join the fleet and be on the pace right away. ‘It helped us not arriving with big expectations but rather a team that was willing to work hard and learn together and see how far we can go. Ed [Baird] had a lot to do with us doing as well as we did, he was a great teacher as well as tactician. I also think we had a good mix of experienced sailors and newbies who were keen to prove themselves,’ says Plattner.

‘But maybe the largest part was keeping it fun the whole year. It is pretty cool that my dad and I can do this together, as Tony [Norris, project manager] tries to manage us all! Tony also managed to put a good team together for us, all highly competitive but fun to hang out with at the same time.

‘A good project manager is key, a good shore crew, and of course a good team on the boat. Our project manager might be the better person to ask. He does all the work… He might tell you it’s not as easy as he makes it look!’

English skipper Tony Langley now runs three TP52s. He will mix 52 Super Series rounds with a couple of events in the US including the NYYC’s 175th Anniversary Regatta in Newport. Langley visibly thrives on pitting his team against the best in the world, being able to take a race or two off Cup-winning helms like Ed Baird. ‘Right now this is the highest level of monohull racing and Tony loves that. It is why we are here,’ says Gladiator project manager Tom Wilson.

‘Tony is an engineer and sees the direction things have to go in. He understands the numbers and is always pushing to improve.’

Gladiator, along with French team Paprec, has made a point of bringing promising younger talent onboard. ‘Otherwise it all becomes a bit Dad’s Army,’ says Wilson. ‘Guys like Bradley McLaughlin [RNZYS Performance Programme] and Matt Brushwood [Ineos Rebels] catch on pretty quickly compared with the older fellas and add a lot in terms of fitness and enthusiasm.’

Langley is lobbying for some future events to be held further afield, starting with an event in South Africa in early 2020 and later perhaps an event in Auckland during the America’s Cup. ‘There’s a big world out there to enjoy,’ says Langley. ‘There’s no reason we can’t risk poking our noses out beyond the Mediterranean once in a while!’
Andi Robertson