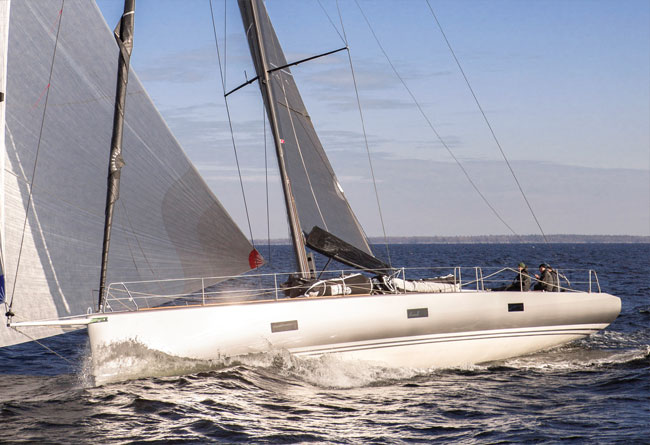 Once the exclusive preserve of the mega yachts the benefits of captive winch technology are now becoming available to (us) mere mortals...

Out of sight and out of mind perhaps, but a new generation of captive reel winches is evidence of a hidden revolution below decks. Market leaders Harken have raised the bar in this field with an electrically powered range that is proving popular aboard boats that you might never expect to have them.

But while big boats have driven much of the development in this area, this new wave of modern winch design, along with the application of new technology, is feeding development in other areas of the sport. The new range of innovative winches has provided a catalyst for change elsewhere. Harken has recently supplied several electric captive winches for boats in the 55- 80ft range, a marked departure from conventional thinking where the weight, size and power requirements of a hydraulically driven system would generally point towards larger boats.

In addition, the new winches are also proving popular with production builders such as Jeanneau, Beneteau and Southern Wind, which have each installed systems aboard some of their models. Other builders are employing the new winches for boats with design briefs biased towards racing. 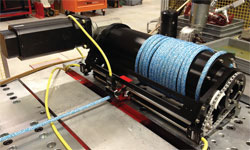 Above: Harkenʼs latest captive winches donʼt just offer an impressive line speed when hauling in. They can also ease a line just as quickly and safely when rapid action is needed, for example to depower in the face of a canapé threatening broach... Unlike deck winches, which have set gears, you can also vary line speed smoothly from an astonishing 65 metres per minute in high-speed mode down to just three metres per minute for fine trimming

A recent custom 68-footer from Baltic is a good example, with a captive reel winch for the mainsheet that has a three-tonne capacity, is unexpectedly light, with an impressive line speed of 65m per minute when unloaded. Even more impressive is that the line can also be eased at this speed for situations where a big ease must happen NOW.

The control of the winch is achieved with a joystick that can be mounted close to the helm position, but provides an impressive range of control from high speed during a manoeuvre, to very small increments when trimming.

The winch itself is built from aluminium alloy and weighs only 55kg. It has a footprint of just 350 x 500mm and includes a separate line tensioner that keeps around 10-15kg of load on the line to ensure that there are no overrides when there is little or no load on the sheet. It mounts just aft of the mast base.

Nine years ago Harken introduced a range that catered for loads from three to 16 tonnes. Four years later, the concept and product range had developed to accommodate 25-70 tonne loads. But the advances have not just been about load.

‘Today, whatever the size of vessel that is being considered, when it comes to the design of captive winches there are many factors that now need to be addressed in addition to load capacity. Weight is a very important one for racing boats, but there are others including; line speed, control precision, and the overall dimensions of the winch are among the key design issues’ explains Harken Italy’s head engineer Michele Cazzaro.

Pulling the line in is one thing, easing it out quite another and here the Harken tensioner system lies at the heart of the performance of their winches. Keeping a constant load on the line is essential to ensure that the rope doesn’t override on the drum.

‘Getting the right grip on the rope to ensure minimum friction, but retaining maximum control is crucial,’ he continued. ‘The system also needs to dissipate heat and remain sympathetic to the rope, especially on large boats, where it is expensive to replace a control line.’

From a user’s point of view, another interesting step forward is the way in which the winch and the line are controlled using the joystick. Unlike traditional push button systems and deck winches with set gears, the line speed scan be varied smoothly from a maximum of 65m/min in high speed mode, to just 3m/min for fine tune and trimming.

‘Another, advantage of selecting a captive winch for sheets, is that you don’t end up having to manage piles of line on deck or in the cockpit,’ said Morgan Gutenkunst, custom sales project manager at Harken. ‘You get a very clean look and the crew have extra space to do their jobs.’

Power was also a large part of the new style of winches. Switching from the more familiar hydraulic system to electrically powered units might not sound like a big step, but the change has opened up new possibilities for designers and builders.

Traditionally, the world’s superyachts depended on a variety of onboard hydraulic systems making it logical to go for the same power for the winch systems. But the move towards more electrical requirements has shifted this focus.

‘Below six-tonne loads, the winches use a 24 or 48 volt system,’ says Cazzaro. ‘Above this the winches run off 500-800v DC systems, or a 400v AC 3 phase supply. With more demand for electrical power for other systems aboard modern designs, the result has seen larger battery bank installations. Tapping into this power source was a logical step that also had some practical benefits.

‘Electrical power is more efficient as there is less energy conversion required when compared with a mechanical and hydraulic system,’ says Cazzaro. ‘Another reason for the general switch to electricity is the growing number of owners who don’t want to run a generator at night. And when the sail trimming systems are running, electric winches are quieter than hydraulic systems as well.’

The ease of operation, the improved performance and the convenience of the power supply are all factors that help to underline the advantages of a captive reel system. But commercial director Emanuele Cecchini also believes that the technology is helping to encourage a wider market to consider the system.

It has been clear for some time that people like to be able to sit behind the wheel and sail the whole boat using push button systems,’ he says. But often this has meant hydraulic systems that are not very easy to retro-fit and are often heavy and bulky. Push button sailing has also been a Mediterranean trend, but now the concept is moving further afield with better control of the winches along with lighter, smaller, more efficient systems that are also more affordable and easier to install. 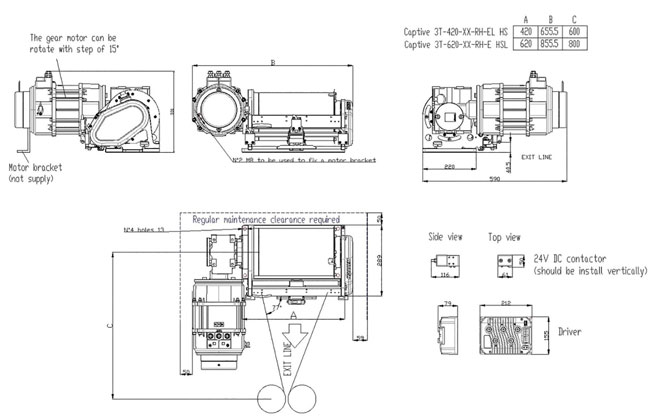 Above and right: these new captive line reeling winches

from Harken are powered by electrics, rather than hydraulics, which offers a number of practical benefits. Electric winches are lighter, more efficient and quieter, more versatile and also generally easier to operate. Retro-fitting is easy, too

While the advantages are there to be had, when it comes to considering and installing a system, be it for a retro fit or for a new build, Cazzaro is keen to emphasise the importance of getting support at the early stages.

‘There are some key factors that have to be taken in to account in order to get the best out of the system,’ he says. ‘We like to work closely with designers, builders and project managers from an early stage to make sure that issues such as the line routing, and types of line, the loads and the overall use among other details are considered at an early stage. We hope they’ll consider captive winches appropriate for more and more applications.’

Meanwhile, the development at the top end in the superyacht world continues. And while Cazzaro is reluctant to reveal too much about Harken’s latest system aboard the soon to be launched Baltic 142, he did give a few hints as to why the project was considered to be another step forward.

‘Aside from a full package of Harken winches this boat has an innovative new push/pull system that operates the DSS foil aboard the boat,’ he says. ‘Normally the system would employ two winches and two motors to operate the system - this uses just one.’

The boat is due to be launched and trialled during early summer this year. But for all the advances across the wider range of boat sizes and types that are now possible, Cecchini accepts that powered systems aren’t for everyone, yet.

‘To me it is like the arguments for and against automatic and manual gearboxes in a car,’ he says. ‘Part of the reason for differences of opinion is cultural, part of it simply comes down to practicalities. In America it’s hard to find a car with a manual gearbox, while in Italy it’s the reverse.

‘But for some it’s simply about feel. The interesting point here is that modern paddle gear changers in performance cars sit somewhere in between satisfying both sides of the debate. I believe that’s where we are heading with this new generation of captive reel winch design.’