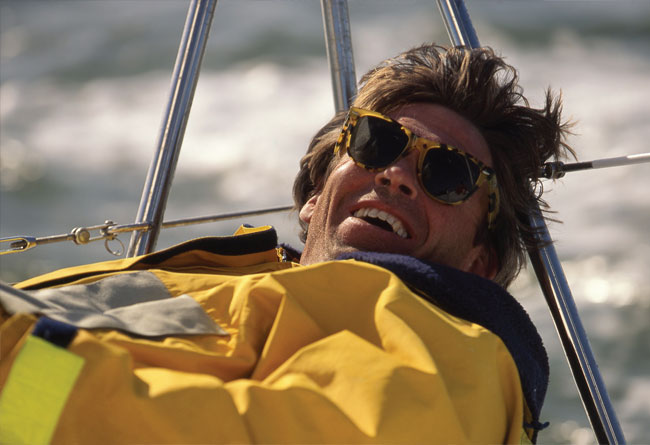 Here’s a sneak preview of the just-released documentary film about Vendée Globe competitor (and one time Seahorse contributor) Mike Plant. It’s an amazing, probably unrivalled glimpse into the psyche of a solo sailing icon

Mike Plant was one of the most remarkable and fascinating figures ever to compete in solo ocean sailing, widely admired for his prodigious talent, superhuman toughness and single-minded determination. He burst onto the scene out of nowhere in the mid-1980s, built his own Open 50 on a shoestring and won his class in the first race he entered, the 1986- 87 BOC Challenge. In a career that spanned just five years before he was lost at sea while sailing his radical new Open 60 Coyote to the start of the second Vendée Globe, Plant achieved more – against all odds, sailing around the world three times by the seat of his pants – than most professional sailors do in a lifetime.

Plant’s bold exploits and great sportsmanship made him a hero and a source of inspiration to many sailors around the world. The darker shades of his larger-than-life character make his incredible story even more fascinating. All is revealed in a riveting new documentary film, Coyote: The Mike Plant Story, directed by Plant’s nephew, Thomas Simmons. If you’ve ever wondered about the rumours of cocaine smuggling that clashed so strangely with Plant’s clean-cut image, or the real story behind his arrest in the Azores on an Interpol warrant in 1986 and the mystery of his release from a Portuguese jail just in time to start the BOC Challenge, you’ll have to watch the movie.

Coyote is an excellent film by any standards. The wealth of archive footage, covering the first Vendée Globe, two BOCs and more, is reason enough for any sailor to watch it. ‘Mike wasn’t always forthcoming about his time at sea,’ Simmons says. ‘He was fairly private, but there are a few pieces of archival footage of Mike that are incredibly powerful and insightful around the challenges and the freedom of ocean sailing.’

Main picture: Mike Plant was one of the most talented solo sailors of his generation. His legendary toughness, sportsmanship and determination won him the respect of his peers in the singlehanded ocean racing community. A quarter of a century after he was lost at sea, this new documentary directed by his nephew paints a fascinating picture of a complex character

Interviews with Plant’s family and friends – including substantial contributions from Vendée Globe founder Philippe Jeantot, yacht designer Rodger Martin and North Sails president Ken Read – weave together the strands of the story and bring it eloquently to life. ‘The willingness of so many to step forward and appear on camera for the film is a testament to the impact Mike Plant left on people,’ Simmons says. ‘Timing had something to do with it as well… many people close to his story were emotionally impacted by his disappearance, but 25 years had passed, giving these individuals time to process, heal and relive the moments in a very genuine tone. It made the production incredibly special and I think that shows on the screen.’ 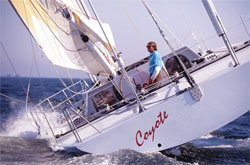 Above: one of the last pictures of Mike Plant aboard his radical Open 60 Coyote, which capsized after losing its keel bulb in a north Atlantic storm while on passage from New York to Les Sables d’Olonne for the start of the second Vendée Globe Race in 1992. Simmons’s film points to many factors that probably contributed to the tragedy and reminds us of some important lessons in seamanship, but it’s also an inspiring story of a man who achieved so much by following his dreams 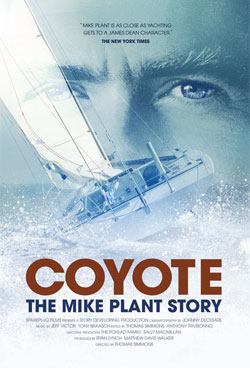 It would have been easy, given Plant’s status as America’s greatest solo sailor and Simmons’ own memories – he was only 10 when Plant disappeared – to produce a film that cast its protagonist as a straightforward hero who met a tragic end. ‘I remember feeling like my uncle was a superhero of some kind,’ Simmons recalls. ‘My overarching memory of Mike rests in the energy that he brought into every room. It was a quiet energy – more of an intangible and a look in his eye. He was always up to something and focused solely on that mission, and it usually involved getting back out to sea and chasing adventure.’

The film succeeds in painting a more complete picture of Plant, balancing his achievements with his failings. It points to possible causes of Coyote’s capsize, including time constraints, lack of money, structural shortcomings, Plant’s own alleged recklessness and – highlighted in a candid interview with the photographer Billy Black, who was on the helm at the time – running hard aground in the Chesapeake just before the final, fatal voyage. But it avoids getting bogged down in the aftermath, which resulted in a lawsuit brought by Plant’s fiancée Helen against the boat’s builder, a US Coast Guard investigation and a lot of conjecture. ‘I recognised that highlighting the afterthoughts missed the message of the story I was trying to share,’ Simmons says. ‘It created an investigative and accusatory tone that I wanted to avoid. My goal was to share Mike’s story with authenticity and focus on his spirit alone.’

For all who sail offshore and especially the singlehanders among us, Coyote is a cautionary tale that shines important light on balancing risk-taking and dreams with preparation and reality, Simmons says: ‘Just as the power of the human spirit can propel an individual to defy the odds and conquer, that same grip of passion and determination can create a tunnel that overlooks sensible decision making.’

The film also has an equally powerful positive message. ’I hope people walk away from Coyote inspired to pursue their true aspirations in life,’ Simmons says. ‘Mike’s story speaks to the power of the human spirit when passion meets determination. Our dreams do not need to include life and death situations, as Mike’s aspirations did, but everyone has a heart that is speaking clearly and we need to listen and follow.’

The film is available on major digital platforms in 80+ countries and can be accessed at Coyote: The Mike Plant Story »