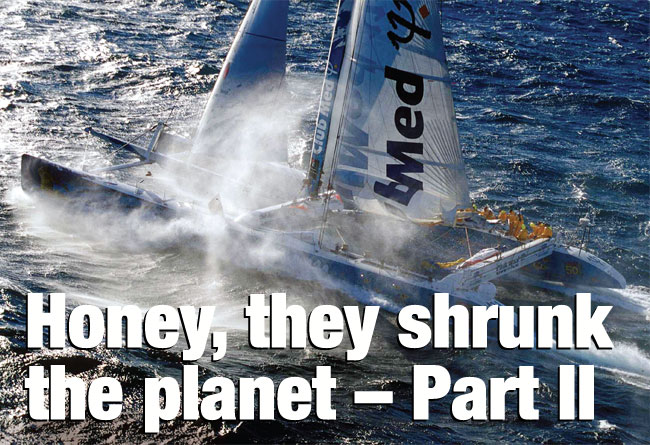 Happy in his role as organiser but clearly aching to be out there, Bruno Peyron sat through The Race 2000 sharing the joy, the fear and the sense of wonder experienced by crews riding a whole new generation of machines – purpose-built giants dimensioned to take on the Southern Ocean like no other sailing vessel had done it before. The Ollier-designed 110ft sister cats Club Med, Team Adventure and Innovation Explorer shared the stage with Steve Fossett’s Morelli-Melvin PlayStation, whose 125ft length and high bows suitably impressed.

The event, Bruno’s brainchild, had been conceived to launch a new era, and was timed for maximum impact: capitalising on the new millennium, The Race exploited this generalised sense of renewal as much as possible, making a statement. The Jules Verne pioneer had it all planned out, and despite a few hiccups – notably Team Philips’s failure – it all came together and wrote a few lovely pages in sailing’s big history book: Grant Dalton and Club Med circumnavigated the globe in 66 days, lyrical logbook entries kept on coming from Loïck Peyron’s Innovation Explorer, Roman Paszke brought the ex-Commodore Explorer (Polpharma Warta) home after having endured a storm comparable to the one Peyron had survived in 1993 – caught off the Falklands in 80kt winds, the (bare) Poles were fighting to keep their boat upright, and on the other end of the satphone that day at Race HQ the usually rather unruffable Bruno was almost shaking, white as a ghost, reliving the ordeal.

Back in the chase
A few months later, with everyone safely ashore and all the marquees put away, the man is back in racing mode, with Innovation Explorer gradually turning into Orange in La Ciotat while the team is coming together; nothing’s ever easy when it comes to offshore record campaigns, but Peyron knows that his new-generation weapon is not intimidated by Sport Elec’s 71 days… After a first aborted start on 14 February 2002 due to a broken masthead crane, Orange crosses the line on 2 March.

‘First morning, first sunrise, 40kt of wind under reefed main and storm gennaker,’ writes Bruno Peyron who quickly realises that, despite the technological leap, the record on the first portion of the course between Ushant and the Equator will remain Peter Blake’s and Enza’s property. The big truck, as granite-built Hervé Jan (who already has a Jules Verne under his belt, having been part of Sport Elec’s crew) calls Orange, powers along the South Atlantic but is greeted in the roaring 40s with a nasty spell of headwinds.