Not just about the racing 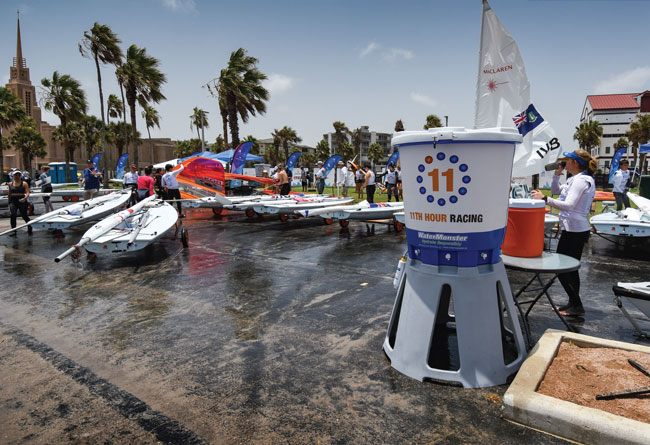 You might not expect oil-rich Texas to blaze a trail in marine conservation but that’s what happened when Corpus Christi Yacht Club – which shares its home waters with some of the largest petrochemical plants on the planet – scored a world first by hosting a Youth Sailing World Championship that was genuinely sustainable, engaged hundreds of local people in marine conservation, left a lasting legacy in the community and established an important new benchmark for international sailing.

Any top-level sporting event on the scale of the 2018 Youth Sailing World Championships (YSWC), with 500 attendees and 350 helpers, can generate a huge amount of waste. Many regattas do, unfortunately, but they don’t have to – and this one didn’t, thanks to inspired leadership and an army of volunteers. ‘Young sailors, I hope you start to wonder what is underneath your boat, as 97 per cent of the Earth’s water is ocean’ – with these words, legendary oceanographer Dr. Sylvia Earle opened the event in Corpus Christi, which featured sustainability and ocean conversation as key themes.

It started three years ago when a previous US Sailing Team member, Elizabeth Kratzig, heard the club where she started her sailing career was to host the Youth Worlds. ‘As soon as CCYC won the bid I wanted to be actively involved,’ she says. ‘Not only is Corpus Christi my home town and CCYC my home club, but in 1991 I was the US representative at the Youth Worlds in Largs, Scotland in the Laser Radial class. I wanted to give back something to CCYC and my community, but also to youth sailing. So I began thinking… what an amazing opportunity to reach the next leaders in our sport and teach them about ocean conservation.’

Pollution was on Kratzig’s mind. Many of her friends were training for the Rio Olympics in heavily polluted Guanabara Bay and her husband was battling serious pulmonary disease, believed to be caused by exposure to pollution. An inspirational sailing friend, Chafee Emory, got her thinking about what she could do personally. In August 2015 she sent the co-chair of the Youth Worlds a proposal to make the event “environmentally responsible”.

Main picture: hydration was a huge issue for the organisers of the 2018 Youth Worlds in Corpus Christi, due to the brutal heat and humidity of midsummer on the south Texas coast. But instead of handing out 50,000 single use plastic bottles to keep sailors, coaches and helpers hydrated, all attendees had to bring their own reusable water bottles; the popular ‘Hydration Stations’ were set up ashore while all safety and support boats also carried a supply of water to refill the sailors’ drinking bottles

Kratzig also had to convince CCYC. ‘Creating a green regatta was not on the radar of the committee. Their focus was meeting the fundamental needs of the regatta. But when I approached the chair, Sandi Carl and field of play manager, Mark Foster, they both said ‘Great! Take it on!’

Next, Kratzig sought advice from the conservation group Sailors for The Sea, whose Clean Regatta programme proved very useful for motivating yacht club staff. ’Reaching Platinum level was the driving force behind their enthusiasm,’ she says.

The club’s directors immediately got behind the sustainability plan despite concerns about extra costs. ‘We just pushed forward and decided to make it happen,’ Kratzig says, ‘and to look for sponsors to offset any added costs’. To its great credit, the club publicly committed to running a green event long before any financial support was offered to help it.

There were sceptics to convince and logistical challenges. ‘Few other regattas, if any, are responsible for housing and feeding 500 people for seven days,’ Kratzig says. ‘The heat and humidity in Corpus Christi are extreme and the idea of not being able to throw a single-use plastic bottle to a competitor when they needed water was scary for some people, but it was encouraging to see people changing their mindsets.’

Kratzig found a useful ally in Dan Reading, sustainability manager at World Sailing. ‘We started talking to Elizabeth and the team well in advance and specified some metrics to be recorded as a benchmark for our future editions,’ he says.

Five months before the event, 11th Hour Racing came on board to sponsor the sustainability initiatives. ‘It was greatly thanks to Elizabeth’s leadership that we got involved,’ says spokeswoman Alessandra Ghezzi. ‘Her enthusiasm and dedication were instrumental in developing a comprehensive plan that included both environmental and social elements. She was able to overcome many challenges, secure the interest and buy-in from many stakeholders, and most importantly she was able to really bring the local community together around this successful event.’

The headline achievement was a massive reduction in plastic waste – a very apt goal for a sailing regatta, given the serious global problem of plastic polluting our oceans. 50,000 throw-away plastic water bottles normally end up in landfill after a regatta of this scale, but they were banned and all attendees had to bring a reusable bottle. Stainless steel drinking straws were distributed and plastic straws banned.

Hydration stations were set up ashore and manned by volunteers. Out on the water, all safety and support boats carried five-gallon jugs to refill competitors’ water bottles. They also had reusable bottles to throw to the windsurfers, who couldn’t carry them on their boards. Four volunteers spent two hours every morning refilling the water dispensers ashore and afloat.

Lunches and snacks were packed in compostable materials and reusable bags, which attendees had to wash and bring back the following day. No individually wrapped snacks were served and no plastic utensils used. All flags and sponsor banners were printed on recyclable fabric with water-based ink. Boat park fences were erected with reusable bungee cords rather than cable ties.

Above: perfect 29er conditions in Corpus Christi Bay. All the race courses were kept close to the regatta boat park, to Corpus Christi Yacht Club and the city marina, which helped to reduce the amount of fuel used by the many support boats that attend today’s major international competitions. The Corpus Christi Yacht Club’s own ‘green team’ identified that the main source of landfill waste at this regatta was the packaging of boats for shipment; as a result World Sailing is now working with several boat suppliers to reduce their reliance on the most damaging materials – most typically polythene sheeting and bubble wrap

Another success was diverting waste from landfill by recycling and composting it instead. Composting is now recognised as a crucial part of any effort to reduce greenhouse gases and potentially one of the major solutions that can lead us to a sustainable future. At the Youth Worlds, meals were served on compostable tableware, trained volunteers manned waste stations at mealtimes and competitors were left in no doubt that a zero-waste future is achievable and important. Almost 90 per cent of the total waste was recycled or composted which reduced the total carbon footprint by the equivalent of 22 tonnes of CO2.

Nearly all of the landfill waste (and most of the recycling) was from unpacking the boats, which were shipped to Corpus Christi in plastic, cardboard and bubble wrap. Another source of landfill was the 1,500 stickers put on boats for the regatta. ‘Finding a sustainable solution to brand sails and boats, instead of vinyl stickers, is now a priority for World Sailing’ Kratzig says.

By using a dedicated smartphone app, renting 10 display screens and putting the official ‘notice board’ on the World Sailing website, Corpus Christi’s green team reduced the race office’s use of paper from multiple reams to just 50 sheets.

Most international sailing regattas burn a huge quantity of fuel, with every team coach buzzing around the race course in their own motorboat. A lot less was used at Corpus Christi, where all coaches had to share a single boat. Even so, nearly 14,000 litres of petrol was used and more than 3,000 of diesel. ‘The event is almost as sustainable as it could be,’ says Portuguese 420 sailor Fred Baptista. ‘The only pollutant factor continues to be fuel consumption by the organisers’ boats. That can be improved with the help of technology.’

Beyond these achievements, the Youth Worlds green team sought to educate the competitors about marine conservation. With beach clean-ups, storm drain signposting, presentations, conservation booths and technology exhibits, movies and artwork initiatives, there were many opportunities to learn.

‘Conservation depends on every single person and we all can make a change,’ says Fred Baptista. ‘Even though we can't survive without plastic we can significantly reduce the amount we use by taking small measures to cut out single-use items,’ adds his teammate Manel Fortunato. ‘It felt good to be part of that big group of people with the same concerns and feel that we are all together working to protect the environment, and, hopefully, being able to pass on the information we have to others. That is why the Portuguese 420 teams at YSWC 2018 made a video sharing our experience, trying to pass the message on to other sailors. Someone has to start changing habits and we proudly take on that role in our country!’

Surveys before and after the event show that many participants were inspired to change their behaviour and found strong support (95 per cent) for a continued focus on conservation at future Youth Worlds.

‘Important lessons were learned,’ says World Sailing’s Dan Reading. ‘Primarily the fact that it is possible to ban single-use plastics. Areas where we didn’t quite reach our goals, such as accurately recording energy use, can be actioned further in advance for the next event.’

‘The sustainability initiatives impacted so many local people,’ Kratzig says, ‘many more than I expected.’ Texas Sailing Association is the first in the country to adopt the Clean Regattas programme and to promote ocean conservation. CCYC’s green team is planning sustainability initiatives at its next big regatta, the 2019 Etchells Worlds, spreading the message to adults. They have created a local Sustainability Event Plan to advise other organisations in Corpus Christi. Two event organisers have already been in touch. There is talk of creating a Sustainability Commission for the city.

For World Sailing, too, the regatta will have a lasting legacy. All event contracts now have sustainability clauses. ‘A quick win will be for us to work with boat suppliers to ensure the boats can be shipped without plastic waste, whilst being adequately protected’ Reading says. ‘Some manufacturers such as RS have moved away from polythene and we will be expecting this from our suppliers in the future. We can also ensure hotels used for regattas commit to avoiding single-use plastic. Surveying the sailors was important, there was overwhelming support for sustainability, which I hope will spur other regatta organisers to replicate.’

Kratzig has started her next mission, to help make the 2019 World Cup Series in Miami, USA more sustainable. ‘Once you’ve done one event, every other event will be that much easier,’ she says.