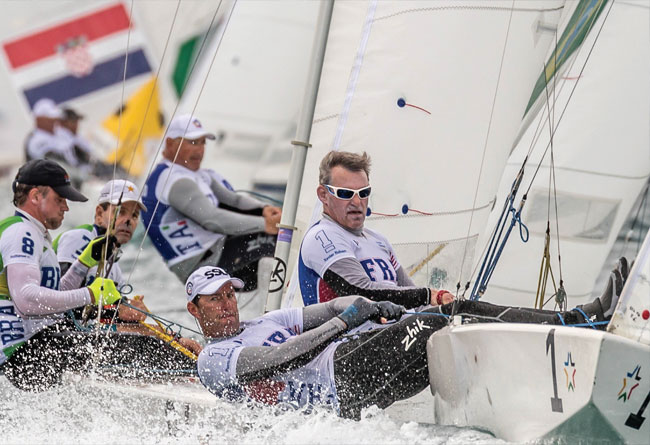 A criticism of sailing from both inside and outside the sport has been the lack of an undisputed World Sailing Champion. You don’t have to delve too deeply into the Star Sailors League to realise that there is finally a solution

The countdown is on for the sixth running of the Star Sailors League Finals in the Bahamas. This event, which aims to decide the best sailor in the world, will again be hosted by the Nassau Yacht Club, with racing taking place on the warm, azure waters of Montagu Bay from 3 to 8 December. As usual there is a prize pot of US$200,000 up for grabs.

Times are changing in the Star Sailors League. For its first four editions the Finals were won exclusively by titans of the Star class: Mark Mendelblatt and Brian Fatih in 2014 and 2016; Robert Scheidt and Bruno Prada in 2013; and George Szabo and Edoardo Natucci in 2015. However, the applecart was upturned in 2017 when the British three-time Moth World Champion and Beijing Laser gold medallist Paul Goodison came out on top.

In addition to being a profoundly talented sailor, Goodison’s victory would not have been possible had he not sailed with an experienced crew in Frithjof Kleen. Kleen represented Germany with Robert Stanjek in the Star at the London Olympics, having claimed silver at the 2011 World Championship in Perth. With Goodison he instigated a 10-day training programme going into the Finals. The line-up in Nassau included familiar Star boat heroes like Paul Cayard, Torben and Lars Grael, London 2012 competitors Robert Scheidt, Mark Mendelblatt, Freddy Loof, Jonathan Lobert, Xavier Rohart, Eivind Melleby, Mateusz Kusznierewicz and Hamish Pepper. The line-up also included French offshore legends Franck Cammas and Loïck Peyron, Luna Rossa helmsman Francesco Bruni and some talented youngsters, German Philipp Buhl and British Nacra 17 World Champion Ben Saxton. The work Goodison and Kleen put in was enough to finish ahead of all of them.

The Star Sailors League follows a match racing-style format with full fleet qualifiers (for 25) followed by quarters (for eight), semis (for six) and finals (for four) with the winner of the qualifiers fast tracking to the finals and the runner-up to the semis. Impressively, the two youngsters also put in a good showing. Buhl, sailing with experienced German crew Markus Koy, finished fifth. Saxton, sailing with Iain Percy’s former crewman and 2002 World Champion Steve Mitchell, came eighth. The 27-year-old was slightly dumbstruck to end up just astern of American legends Paul Cayard and Phil Trinter after his first go in the Star boat.

So the class legends are losing their vice-like grip on the Star Sailors League Finals leaderboard and this is set to continue thanks to a new initiative. To help level the playing field for those who haven’t spent time in the former Olympic two-man keelboat, the Star Sailors League is working with partners to set up training centres in four strategic locations – Miami, Stockholm, Valencia and Riva del Garda. All have Star boats made available by the Star Sailors League (SSL) on which finalists or budding Star sailors can train – a move which of course the Star class is also delighted by, as it helps to entice a new generation into their venerable boat.

Miami is a major centre of Star sailing, annually hosting one of the class’ major events and a scoring event in the on-going Star Sailors League Ranking, the Bacardi Cup. SSL operations there run out of the US Sailing centre in Coconut Grove and are handled by Mark Mendleblatt’s London 2012 crew Brian Fatih. They also have a facility north of Miami where the SSL-owned Star boats used in the finals are stored when not in use.

Star boats are also available for the sailors using Luca Devoti’s Dinghy Academy, based out of the Real Club Nautico in Valencia.

The Swedish centre is based in Saltsjöbaden southeast of Stockholm where it has been set up by Leif Carlsson, son of Sonne Carlsson, the builder of Pelle Pettersen’s World Championship winning Star in 1969. Big news in Star circles is that Sune Carlsson Båtvarv now has the moulds to the P-Star and have put it into production, with the first examples due for completion later this year.

Designed by German two-time Star Olympian Marc Pickel in 2002, with CFD work carried out at Kiel University, the P-Star is a maximum waterline length, minimum volume design which Pickel campaigned at Beijing 2008. It subsequently went into production on the opposite side of the Atlantic at Jon VanderMolen’s facility in Richland, Michigan, built in pre-preg unidirection S- and E-glass over a Corecell foam core. It was following Ireland’s Peter O'Leary and German Frithjof Kleen winning the Star class at Skandia Sail for Gold Regatta in 2010 aboard a P-Star against all the Star A-listers, that the P-Star became the must-have equipment for London 2012. Not only did the three medallists sail them, but 13 of the 16 Stars competing and 11 of the top 12 were P-Stars.

In addition to putting the P-Star back into production, Carlsson is also setting up an SSL base, with three or four Star boats available for people to sail and train.

The most active Star Sailors League base was set up last year by Frithjof Kleen out of the Fraglia Vela Riva in Riva del Garda, where they regularly have three or four Star boats available and can offer yearround training.

‘The Star Sailors League invites newcomers to the Star for Nassau but it has always been hard for them to compete against the old Star sailors, because they don’t have time to prepare,’ Kleen explains. ‘So we can prepare them in advance and can also train up new Star crews too. A Finn sailor, for example, might be a fantastic sailor, but there are some small things in the Star which can make life way easier if you know them.’ In Riva, sailors can schedule their training with Kleen or can come along and be part of his regular training camps, which include two in November rolling straight into the Star Sailors League Finals. These will roll on into 2019 when Fraglia Vela Riva will feature prominently on the Star map as it will host the Star Europeans in May.

Loïck Peyron used the Riva facility to get some practice in before the 2017 Finals, but unquestionably the best advertisement was Kleen’s own performance with Paul Goodison, winning the event. As to whether Goodison will return to defend his title in December, now he is part of the American Magic challenge for the 36th America’s Cup, remains to be seen. ‘My fingers are crossed, I am also a bit scared we won’t have time to prepare,’ says Kleen.

Below: Slackers need not apply... 1988 Star world champion and 1992 Louis Vuitton Cup winner (along with a few other scores including dominating the 1997 Whitbread Round the World Race), Paul Cayard raced in Nassau in 2017 with his regular Star crew Phil Trinter, the pair finishing a pretty healthy 7th overall... just behind fellow world champion Mateusz Kusnierewicz of Poland... who is also an Olympic gold medallist and Finn Gold Cup winner

Greater use is expected to be made of these training facilities as an increasing number of the latest generation Olympic sailors are expected to be invited to the Finals. At present the only assured entries are those holding top 10 spots in the Star Sailors League Rankings. At the end of August, with the Star Worlds on the Chesapeake still to be held in October, Italian Diego Negri led the rankings from Robert Scheidt and Xavier Rohart. Beyond the top 10, it is at the organisers’ discretion to fill the remaining 15 slots. Following the Hempel Sailing World Championships in Aarhus in August, it seems very likely that the freshly crowned World Champions from Denmark will be on the start in Nassau this December.

Among them is likely to be Croatia’s Sime Fantela, who raced in the Star Sailors League Finals in 2016 shortly after winning Olympic 470 gold in Rio. Fantela has since moved across to the 49er, which he sails with his brother Mihovil, a former RS:X sailor. Incredibly after just 18 months in the Olympic skiff the Fantelas won the recent World Championship. As Sime admits, ‘I wasn’t expecting it. It just opened up – there were good conditions and we just used the opportunity to win it!’ And this was despite the regatta being held in moderate to strong conditions, which are not their favourite.

‘One of our strongest points was consistency,’ Sime continues. We had one 25th, but in that race Miho lost the sheet and we did a bad tack and we couldn’t recover. We were strongest in the Finals which we entered in 12th position, but then all our results were in the top 10 and four in the top five.’

As to the Star Sailors League Finals, Fantela hopes he can come back this year. In 2016 he finished 10th but was learning rapidly and after a slow start getting to know the boat, impressively won three of the last five qualifying races. Unfortunately, he and his crew were 20-25kg underweight and when the breeze got up in the quarter finals they were unable to keep up. Two years on and Fantela is now a heavier 49er sailor and, with whoever he decides will be his crew in Nassau, he wants to ensure they are closer to maximum crew weight. ‘I would love to fight for a medal,”’ he says, meaning that this time he wants to win.

‘I always loved the Star. Looking at it from outside and how it sails, plus it is really technical, which I like, and really tactical so you fight with your brain, not just with your muscles although you have to be strong and hike a lot to get it going. If you win, for sure it is not because of luck.’

Frithjof Kleen also endorses the Star as a great egalitarian test for all sailors, thanks to it being so technical. What young sailors lack in lengthy Star boat experience and on the water wiliness, they make up for through their greater athleticism. And vice versa. The former ‘can trim the boat perfectly because they are such good sailors and smart.’ The latter, the Finn and Laser sailors ‘on the downwinds with the free pumping, they are machines.’