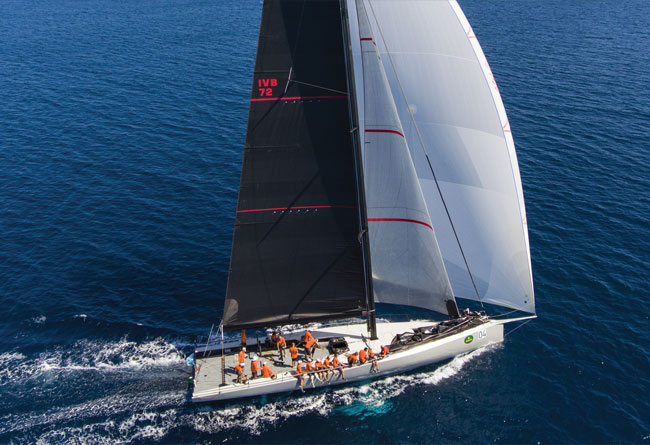 Swiss-based Carbo-Link has long been one of the quiet giants of high performance sailing… It is only now, many years after they rigged their first America’s Cup winner for Alinghi that word is getting out at last

What do Ariane’s space rockets, Porsche’s racing cars, Liebherr’s largest industrial cranes and some of the world’s most technically advanced suspension bridges have in common with Ultime Trimarans, Maxi 72s and most of the recent contenders in the America’s Cup? They all rely on cutting-edge composite solutions from Carbo-link to solve extremely complex structural engineering challenges and gain a competitive advantage.

Carbo-Link’s roots are in hi-tech civil and industrial engineering – the company is a spin-off from the highly regarded Swiss Federal Laboratories for Materials Science and Technology (EMPA) – but while it remains a world leader in these fields, working on large-scale infrastructure projects, its technology has migrated into other industries including aerospace, motor sport and high-performance sailing. Since the turn of the millennium, a major focus for Carbo-Link’s innovation has been the development and refinement of new, often groundbreaking, rigging solutions for high-performance racing and superyachts.

Economy of scale
Carbo-link actively searches for technology transfer between its marine, aerospace, construction, industrial and motorsport divisions, creating an economy of scale.

Main picture: the dramatic increases in boatspeed that weʼve seen in the last few years, in both monohull and multihull racing, have amplified the inherent benefits of elliptically profiled, solid carbon fibre rigging. The higher the apparent wind speed, the greater the drag differential and the greater the advantage. The Maxi 72 fleet has been leading the way, with Carbo-Linkʼs new CL Ellipse and CL Hybrid rigging already fitted to Momo (above) and Cannonball

We tend to assume that highperformance sailing is at the forefront of technological innovation, but that’s not always the case. The durability of Carbo-Link’s cables, for instance, is well proven in applications that reach far beyond the demands of sailing. The marine classification society DNV GL (formerly Germanischer Lloyd) expects yacht rigging to withstand at least 100,000 load cycles, but Carbo-Link has developed cables that can operate safely at more than 18 million load cycles to meet the far more rigorous requirements of large-scale civil engineering projects. On a slightly smaller scale, its pendants for Liebherr cranes routinely handle three million load cycles. In theory at least, one set of solid carbon rigging cables can literally last a lifetime.

CL Ellipse
One of Carbo-Link’s innovations – elliptically profiled solid carbon rigging, developed for the Deed of Gift America’s Cup multihulls back in 2010 – was so far ahead of the curve that most of the highperformance sailing market (with a few notable exceptions) has only recently begun to embrace it, long after it was used in the America’s Cup. So what’s changed? Fleets have become more competitive and the increases in boatspeed of both multihulls and monohulls in the last few years, particularly with the adoption of hydrofoils, have amplified the inherent benefits of profiled rigging. The higher the apparent wind speed, the bigger the advantage. With Maxi 72s such as MOMO and Cannonball leading the way, profiled solid carbon rigging has finally started to gain some real traction. Race-focused superyachts are set to follow suit, starting with a Baltic 142 due to launch in March next year and with more to follow.

CL Hybrid
Solid carbon rigging offers clear advantages for shrouds, forestays and fixed backstays. It gives you the smallest possible cable diameter and can be profiled to further reduce drag; it’s chafe-resistant, light and durable; and unlike flexible cables, it can live on the mast for years without needing to be sent back to the manufacturer. But what about rigging that needs to bend, like runners and topmast backstays? Solid rigging doesn’t like being flexed around sharp corners, so it’s not ideal for these applications. ‘Some of our clients were having to fall back on flexible cables, which are heavier, have a larger-diameter and a braided cover that needs to be replaced every four years at least,’ Wilkinson says.

Now here’s a solution. Carbo-Link has reintroduced another of its America’s Cup innovations, first introduced in 2007: hybrid carbon rigging, designed to offer all the advantages of solid rigging, but with flexible sections in places where the cable needs to flex: where the deflectors sit; and where the boom can bend the cable.

Hybrid rigging is a continuous carbon cable, with no links or joins. For most of their length, these are solid carbon cables without any cover, and they can be elliptically profiled to further reduce drag. In the flexible sections, the cable is cured into a bundle of carbon rods, allowing them to move relative to each other and flex as required.

Tested at sea
These new hybrid cables are already proven on the water following a season of sailing aboard the Maxi 72s MOMO and Cannonball, building on the experience of the V5 Cup boats in 2007. At the time of writing, hybrid rigging’s performance and reliability has been further proven on the Wallycento Galateia and the Maxi 72 Proteus. ‘The hybrid backstays came along as an optimisation of our Carbo-Link profiled lateral rigging package,’ says Cannonball’s project manager, Lorenzo Mazza. ‘It has been a sensible step, reducing the frontal area of our cables’ sections by 4.5mm and changing the section shape from circular to elliptical. There was no doubt of the good value of this project.

‘It has been great to be able to confirm the design objectives: diminish the cable drag and reduce the weight, whilst at the same time making sure of no feathering, no vibrations and good alignment of the section all way up the cable. All well achieved!’ Mazza continues.

Above: the hybrid carbon rigging cables on this Maxi72 rig reduces the total frontal area of the yachtʼs standing rigging by almost a square metre and its elliptically profiled shape further reduces drag. Below: the two-time Americaʼs Cup winning Swiss sailing team Alinghi is a longterm customer of Carbo-Link, having used its cables since 2007. The teamʼs Deed of Gift cat defender Alinghi 5 went one step further with the enormous but very light platform locked in place using a complex array of Carbo-Linkʼs both round and ellipse solid rigging

What’s the difference in drag between a Maxi 72 mast with a full set of aerodynamically profiled solid carbon rigging and the same mast with regular bundled carbon, circularsection rigging? Wilkinson says the frontal area is reduced by 0.8m2, which equates to at least as much drag as a highway stop sign held perpendicular to the wind – and the reduction in drag coefficient will be substantially more than that. For a Wallycento rig, the difference is a reduction in frontal area of 1.5m2, or two stop signs, and for superyacht rigs it’s even more. Carbo-Link is now working with a number of projects to put both profiled rigging and hybrid carbon rigging on several highperformance yachts and superyachts in the near future, including the Baltic 142.

Carbon toggles
What are the heaviest rigging components on the mast of a large racing yacht? It’s usually the toggles – hefty chunks of stainless steel attached to the upper end of the mast. For a 50-metre boat, they can weigh 50kg or more, and that weight is precisely where you don’t want it to be. Carbo-Link’s recent work with Rondal on the rigs of highperformance superyachts such as Ngoni, Pink Gin and Aquarius has led to another invention: the carbon toggle, which has been entered for the DAME Awards 2018.

The technology derives from crane cables, where it’s already proven and quite widely used. Each toggle is laminated as a basket loop from prepreg carbon and cured under tension to ensure the fibres are perfectly aligned. ‘There might be some torque in the forestay due to friction in a swivel or a wrapped halyard, so our toggles are also designed to take torsional loads,’ Wilkinson says. ‘To avoid load mixtures within the toggles, the different loads are absorbed by different parts of the toggle. Tension is taken by the carbon basket loop and torsion by the outer tube of the toggle.’

What’s the advantage? They can be up to half the weight of regular steel toggles. A weight saving of 60kg (20kg per toggle) at the top of a 60- metre mast will substantially increase the yacht’s righting moment. In practical terms, if the yacht has an eight-metre keel with the balance point in the middle, eliminating 60kg at the masthead could save 900kg of weight in the keel.

The other advantage over steel toggles, of course, is that carbon fibre doesn’t suffer from fatigue. The toggles are designed based on the established load ranges and dimensions, allowing for a like-for-like change. This allows substantial weight reductions aloft, with limited impact on sailing schedules. It is also possible to produce custom toggles for bespoke projects.

Carbo-Link will be launching and showcasing two of its new products, carbon toggles and hybrid carbon rigging, at METS (the Marine Equipment Trade Show) in Amsterdam, on 13-15 November, Hall 07, Stand 121.