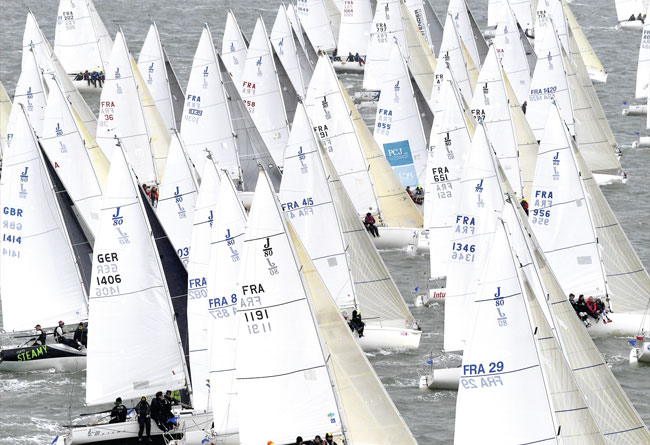 Boats are based in La Trinité-sur- Mer and racing takes place in the splendid surroundings of the Quiberon Bay in southern Brittany. The islands of Belle Ile, Houat and Hoëdic offer shelter and also spectacular scenery for coastal races. Lorient is only 15 miles to the north, which means the regatta attracts the cream of French offshore racing sailors who are based there. The beautiful scenery, consistent winds, and top level competition of Spi Ouest are a hard combination to beat.

The regatta is organised by the Société Nautique de La Trinité-sur- Mer (SNT). The club is undergoing a rejuvenation at present under the stewardship of its ambitious president, Antoine Croyère.

‘My fondest memories of sailing are of competing internationally – as a youngster racing around the world with Éric Tabarly and more recently racing double-handed in the Fastnet on my A35. One of my aims since becoming president of the SNT has been to have more international involvement, both of our club members competing abroad and with international teams coming to race with us,’ Croyère says.

To that end in 2018 the SNT joined forces with the RORC to organise the La Trinité-Cowes race, which will be repeated in 2019 and the club also hosted the 6-Metre Europeans in September.

Main picture: The massive J/80 fleet at Spi Ouest is one of the mainstays of the event, with 73 boats racing last year and a number of world champions expected to compete in 2019.
Below: the stars of the show among the one designs are the Diam 24 trimarans, mostly – but not exclusively – crewed by professional sailing teams 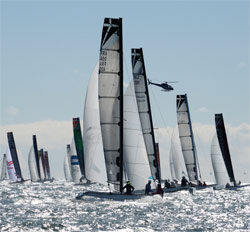 The IRC fleet forms a core part of Spi Ouest. Traditionally the competition has been strongest amongst the IRC2 and IRC3 fleets of 30-37-ft cruiser-racers – predominantly JPKs, J-boats and Jeanneau SunFasts. Boats of this size, from this little corner of France, have won IRC world championships, European championships, Commodore’s Cups, Fastnets and Sydney-Hobarts in recent years. JPK, J-boats and SunFast all have new offerings in this size range and “works” teams funded by the yards will likely keep the racing as competitive as ever.

IRC1 in France looks like it will receive a welcome boost with numerous JPK1180s joining the existing fleet – a diverse mix of “bigger boats” including 40ft cruiseracers, the TP52 Paprec and everything imaginable in between!

One-design sports boats make up more than half of the Spi Ouest fleet. The J/80s will once again be the biggest fleet (there were 73 last year), with numerous world champions from France and Spain expected to attend in 2019. There are also signs that the French J/70 fleets are developing well –aided in part by the SNT’s own youth teams.

‘Traditionally our youth teams have raced in French boats such as the Open 5.70. Recently, however, the club has bought two J/70s and we would like to buy eight more. It will enable our youngsters to race internationally and hopefully encourage more international teams to come and race us here,’ says Croyère.

The Open 7.50s and Mach 650s also offer high-level, high-adrenaline sailing – the boats are often used as training yachts by France’s top professional teams – and there are some available to charter.

The stars of the show among the one-design fleets are the Diam 24s with around 40 largely professional teams tuning up for the Tour de France à la Voile.

Outside of the Diam 24s there is a multihull fleet that sails under the Multi 2000 handicap system – so multihulls of any shape and size are more than welcome.

For European sailors looking to get their season off to a flying start, Spi Ouest is surely a must-do event.

Click here for more information on the Spi Ouest »