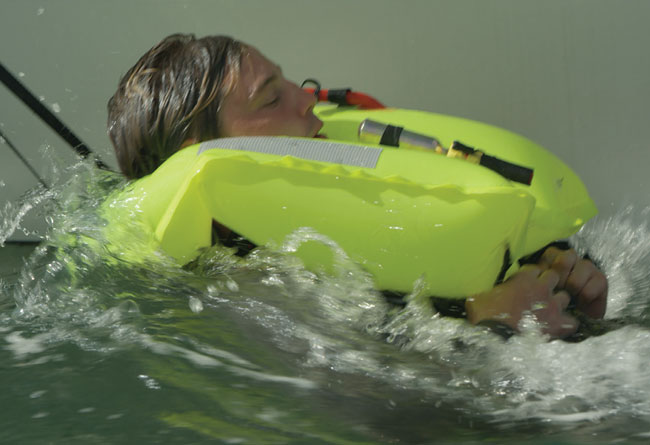 Motivated by a sailing tragedy, TeamO Marine has shown belief, vision and Barnes-Wallis-style testing grit to develop seriously innovative products that are revolutionising safety at sea.

Chris Reddish drowned during the 2011 Morgan Cup from Cowes to Cherbourg. While working on the foredeck, he slipped through the port lifelines and was towed to leeward at the end of his two-metre tether. This tragedy is by no means the only one.

Oscar Mead, founder and design director of TeamO Marine, saw an obvious solution. ‘An experienced sailor lost his life when he fell over the side and was towed along face-down,’ he explains. ‘I felt there was a clear need for change – design a system that tows you face-up.’

Oscar understood the problem. He grew up sailing with his family and remains the youngest skipper ever to finish the OSTAR, aged just 18, in 2009 aboard a J/105. He recognised that lifejacket and tether design needed a complete rethink if these incidents were to end differently, and he had the solution.

Having designed and tested a workable concept that he knew could be ‘a total game-changer for lifejacket technology’, Oscar founded TeamO Marine in 2013 with his father Laurence as non-executive chairman and his sister Lauren handling sales and marketing. His original BackTow lifejacket design received widespread recognition in 2013, winning awards and nominations for innovation.

If you’re clipped on, you’re safe, right? Not necessarily. If you go overboard while the yacht is under way, you’re likely to be towed through the water face down, which in the worst cases can result in drowning. The TeamO BackTow lifejacket is designed to ensure that anybody in the water will be towed face-upwards

Tempting as it must have been to sell the concept and work with a manufacturer to see it on the shelves six months later, the Meads stayed true to their vision. ‘It took us five years to get the BackTow lifejacket from concept, through independent testing and certification and onto chandler shelves,’ says Lauren. ‘It was incredibly challenging, but because we all believed that the design would fundamentally improve lifejackets, we just couldn't let it go. The increase in boatspeed at all levels brings with it a new dynamic in lifejacket and tether safety.’

Years of adaptation, ingenuity and testing followed to achieve ISO12402 and 12401 compliance. It’s a detailed standard, specifying everything from webbing width to stitching to shock load tolerance, all of which needs costly independent testing.

‘It took several design iterations to meet ISO standards,’ Oscar says. One example of his lateral thinking is the release of the BackTow A-frame. You clip on as standard, to a loop on the front, and the A-frame runs up the left-hand bladder to the harness behind the neck. The ISO standard requires the A-frame release to be manual, operable in the water and under load. After exploring many options, Oscar adopted a release method similar to that used in parachute ripcords.

ISO compliance was vindication of all this tireless, hands-on refinement . ‘We patented the design, and we are still the only lifejacket that can tow you face-up if you go overboard whilst tethered,’ Oscar says.

After battling to get it onto the shelves, TeamO faced another problem. ‘As a start-up, we struggled to get our stock flow right at the beginning,’ says Lauren. ‘It took time for customers to understand the BackTow concept, so initial sales were slow. Then some great magazine coverage caused a surge in sales, which meant we sold out.

‘We had to wait for approved parts to be delivered,’ she adds. ‘It was stressful being unable to meet demand, but we were totally honest – we said we couldn’t deliver for eight weeks. We’re working hard to avoid it happening again.’

For the Meads, safety at sea has become an obsession. Oscar worked with Crewsaver to design PFDs for the Artemis team in AC34, and he’s finalising a MkII BackTow with refinements such as a personal AIS pocket and easier-to-use fasteners. Plenty of ideas, then, but no funding.

‘In early 2018 we realised we needed outside funding,’ says Lauren. ‘We ran a crowd-funding campaign on Crowdcube, released some equity and managed to overfund by 35 per cent in 10 days. We’re using those funds to fine-tune our production processes and kickstart R&D.’

One new product is a tether. ‘All sailors know that the first rule of the sea is to stay on the boat,’ says Oscar. ‘In rough weather a wave can wash you off your feet and a twometre tether won’t necessarily keep you on deck. Our solution is the AutoLock Tether, it’s being called the “seatbelt for the sea” and works on a similar principle. It’s the same length and strength as standard tethers, but it has a lightweight reel that adjusts tether length as you move around the deck. The moment you start to fall it locks, arresting your fall. Take the pressure off and it works again.

‘We launched the concept at METS 2017, where it won the overall Pittman Innovation Award, and it should be on the market by autumn 2018,’ he adds. ‘Every part of your personal safety kit should work harder to keep you safe. The BackTow lifejacket with an AutoLock tether represents a whole new way of using technology to save lives. It makes all of the hard years of product development worthwhile.’