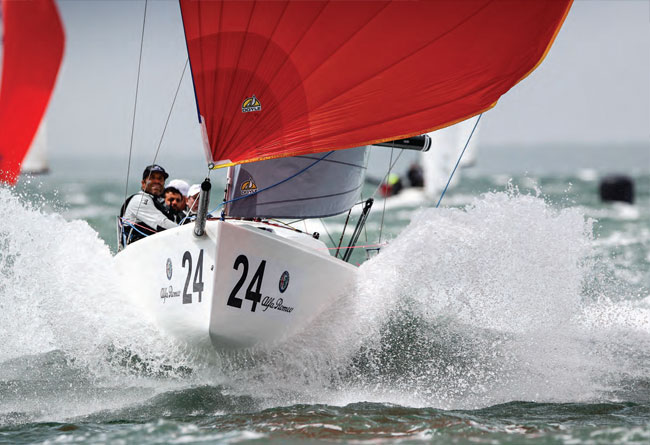 And in all sizes… At the same time as making ever bigger inroads into the sharp end of the superyacht and grand prix fleets, Doyle One Design continue to knock it out the park in classes like the J/70 and Etchells

‘Awesome!’ whooped Peter, newly crowned as J/70 world champion 2017 on the dockside in Porto Cervo, Sardinia. ‘Everything seemed to go our way – it was just one of those weeks! This fleet has some really great talent, and the organisers and the yacht club have both done an amazing job.

‘Most of all, though, I want to credit the crew. Victor, Jud and Willem have all been just fantastic.’

Any winning crew deserves props but this one in particular had something special about it. Willem van Waay is a Doyle sails rep and a professional sailor for 25 years. He understands the J/70 class better than almost anyone. If you can’t find your A game, Willem knows exactly where it is and can show you the shortest route there.

Jud is Jud Smith, president of Doyle one-design. Before last year’s J/70 Worlds win, Jud’s best year was 2006, when he finally won his first Etchells Worlds after years in the top 10, and the Rolex Yachtsman of the Year award followed.

Main picture: The winning team blasts across the Solent at full throttle. Peter Duncan, Willem van Waay and Jud Smith first raced together at the 2017 J/70 Europeans in Cowes, finishing in third place. That regatta, held in 25-35 knots of wind, proved to be a valuable heavy-weather shakedown sail for the Worlds. ‘It was one of our wilder rides...’ Willem recalls

Smith loves detail, and Doyle’s work in the J/70 class is about detailed insight. When Europe started building J/70s in 2015, Smith was one of the first to notice that the Seldén mast on the European boats had slightly different characteristics to the Southern Spars mast on the US boats, with a marginally stiffer section that seemed to like more rake than its transatlantic counterpart.

Having already designed a highercut radial J6R jib for more efficient inhauling, he went on to design an even higher cut jib for the European boats, the J8R, to handle the extra mast rake. Most sails are also available in grey to cut glare and another distinguishing factor is that Doyle mainsails are all crosscut rather than radial, as he found that crosscut sails respond better to backstay and traveller play when beating upwind.

For the upcoming Worlds in Marblehead, Massachusetts – a light air venue – Smith has designed and sold mains built from a fabric of lighter weight.

The key difference is the cloth Doyle uses for its jibs. Specifically for the J/70 class, Smith worked directly with Dimension Polyant in Germany to develop a new resin treatment for high-quality cloth, with the result that Doyle's jibs now have the lowest stretch pro-radial woven fabric on the market.

Where did this story start? Smith was introduced to the J/70 by Peter Duncan, a friend from his Etchells days. ‘We went three-up and raced at Long Island in October 2012,’ Smith recalls. ‘All of the sudden it took off and we started playing around and I thought “This boat’s really cool!”‘

‘The fleet was established back in 2012. J Boats had a promotion day, brought a couple of J/70s and sailed them in Marblehead. I was maybe the second or third to buy a boat. My wife and daughters loved it. It wasn’t a hard sell, the boat sold itself.’

Smith’s first J/70 Worlds was 2014 in Newport, where his boat Africa finished a respectable ninth. ‘We never did a lot of training back then,’ he recalls. ‘Our idea of training was to show up the day before a regatta. Willem’s team, guys like that, would put in days and days of training.’

Van Waay’s results demonstrate that training pays off. He notched up second in Newport, won the 2015 Worlds in La Rochelle and then came second again in the 2016 Worlds in San Francisco.

Smith wasn’t going to campaign his own boat in the 2017 Worlds in Porto Cervo so he teamed up with Duncan, van Waay and Victor Diaz in the Relative Obscurity team. ‘I was a 60-year-old bow guy,’ Smith observed. Their first regatta together was the Europeans in Cowes, raced in 25-35 knots (‘In America we would never have raced in that breeze,’ notes van Waay) and they came third after improving through the regatta.

Immediately van Waay realised they had the right team. ‘For Worlds the legs are usually long, so boatspeed is paramount and that’s what we focused on, figuring out the gears and going fast.’

The next event was the Italian Nationals, which they won on the last day. ‘How we survived I don’t know, because our keel was out of square,’ says Smith. ‘We knew something was wrong because we were way too fast on port tack and not good enough on starboard.

‘We didn’t think it was the rig, we’d checked that. It was just that our keel was a little off to one side, whether there was a shim missing or something, so we shimmed that to square it up. That’s all we really did boatwise, other than show up with some new sails.’

Relative Obscurity invested in coaching by Tony Rey, who helped them fine-tune their performance in the run-up to the 2017 Worlds in Porto Cervo but, according to van Waay, their biggest advantage was their schedule. ‘We showed up a week and a half early and it was very windy. We sailed together for four long days with debriefs from Tony, showing us videos of other boats doing something we could maybe improve upon.

‘We trained in conditions that were very similar to what we got in the Worlds. When a lot of the other teams showed up, the Mistral started howling so some of the best teams couldn’t train much for about four days. For the first two days there was no sailing either, so for a lot of good teams day three of the regatta was their first sailing in maybe a month. It’s pretty hard just to jump right into 20 knots and very big chop.

‘We were pretty big on the rail, probably 755lb, and that started a new wave. Now half of Europe is sailing close to 800lb. It’s going to be slower downwind but pretty quick upwind, especially in chop. Most importantly we knew how to keep the boat rumbling in those conditions, and that’s key to jib lead position, jib sheet position, being aggressive enough on the backstay and playing the mainsheet.’

‘I’d never sailed in Porto Cervo before,’ adds Smith. ‘I’m on the bow watching, trying to understand the venue. We had no preconceived notions and we noticed that if you went right, that was working for those conditions.’

‘On the practice days the righthand side was working,’ van Waay confirms. ‘Then all the Italians show up and say “You’ve got to go left” but on those first two days the conditions were similar to the practice days, so we were going right and it was paying off. We had great speed, too.

‘On the last day we had two races. We won the first, came third in the second and they sent us in because the wind flattened out during the third. It was over. Our discard was a third. I’ve never been in a fleet of more than 45 boats and seen a boat get all top-threes. There we had 161 boats. I’ve been racing professionally for 25 years, Jud a lot longer than that, and that was my biggest high. Against that kind of competition it was super special.’

Above: Hoisting the spinnaker on race 4 of the Worlds. ‘We were diving low to make sure we could ring the bell on the kite and make the pole,’ Willem says. ‘If you don’t get it on the first try, it can be a huge loss in a big breeze. Better to be safe than sorry.’
Below: Powering down the home straight – Relative Obscurity on the final porttack reach into the finish of the last race at Porto Cervo to win the 2017 Worlds

Duncan’s title lasts until 22 September when the 2018 J/70 Worlds starts in Marblehead. It’s a special place for Doyle Sails. Robbie Doyle founded the company there in 1982 and it’s where Smith grew up sailing. Van Waay will be helping Duncan to defend his crown but he will be racing without Smith.

‘I’ll be sailing my own boat at the Worlds,’ Smith confirms. ‘I’ve won the Worlds running the bow. The chances of that happening again are slim to none, so I’ll quit while I’m ahead and go back to where it’s easy: driving.’

With all their local expertise, how different do they think the 2018 Worlds will be? ‘The scores are going to be higher,’ says Smith. ‘Positions can change so quickly. Willem and I were doing a clinic here yesterday in light air. Get a little bit on the wrong side of something at Marblehead and you can lose 50 per cent of the fleet in minutes. If you don’t get away clean, if you’re not in that first row, I don’t think you can recover.’

‘I think eights to 10s would win the regatta,’ agrees van Waay. ‘It’s going to be hard to be consistent especially when it gets light. We had a half-mile beat during our clinic and there were many races where the first-placed boat went to last. Now you’re going to make the weather mark 1.3 miles or so, it gets light and funky, there’s current… 40 points to gain on the last day is still doable.’

‘As far as sails go, our philosophy is a little bit different,’ Smith says. ‘I hear teams are trying this, trying that, looking for a breakthrough. There are no breakthroughs. The difference is tinkering, improving the little things but not making whole sail changes.

‘Marblehead is a complicated place. The teams that are going to do best will be the ones that don’t change too much, who manage to get confident and competitive throughout the range. Make sure you’re comfortable with the sails you have and you know how to use them through the range. The mainsail I’m using has done three regattas. Until I find a better one, the main I’ve got is the one I’ll use.’

One thing is certain: a great many boats will be closely tracking the grey Doyle sails of Africa and Relative Obscurity, hoping to get just a sniff of their Marblehead J/70 wisdom.