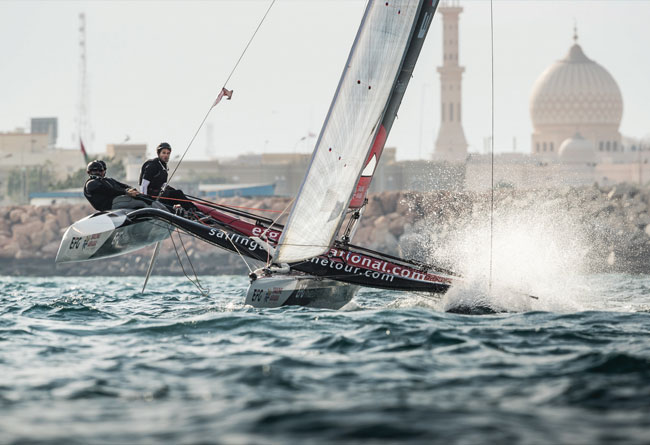 Then again who wouldn’t want to be blasting round the warm waters of Oman on a fast and twitchy Diam 24 tri at an ultra-simple turn-up and race regatta attracting a highly competitive field?

A few months after the event it’s clear that the overwhelming consensus on the first new-look EFG Sailing Arabia – The Tour is of a job well done.

The eighth edition of EFG SATT this year saw a complete revamp with Farr 30s and a route around the southern Gulf replaced by Diam 24 trimarans and an Oman-based itinerary of stadium racing and coastal raids, both changes an intentional nod to the Tour de France à la Voile. Late call though it was, Oman Sail proved more than equal to the organisational challenge, delivering an event that provided perfect winter sailing conditions with warm weather and – mostly – reliable winds.

The opportunity to steal a march on the competition ahead of the European season was not lost on any of the eight teams keen to get their Tour Voile campaigns off to an ideal early start.

Perhaps less obvious was the impact the new course had on those participating. Oman Sail have never made a secret of the fact that, alongside their mission to reignite the country’s maritime heritage and develop homegrown sailing talent, it is also about promoting the Sultanate’s credentials as a high-end, sports tourism destination – combining the pleasure of exciting racing with a chance to explore Oman’s beauty and culture. Starting EFG SATT in the largely untouched south and then taking the fleet along Oman’s striking coastline clearly made a great impression on all those taking part this year.

Cédric Pouligny, a veteran of EFG SATT events, spoke for many when he said: ‘The latest edition of EFG Sailing Arabia – The Tour confirmed what I already knew about Oman and Oman Sail. The hospitality is incredible and I had the opportunity to discover a new landscape and new places – it is absolutely beautiful with enormous potential.’

First-timer Matthieu Souben added: ‘The feeling among all of us was that we were part of building something that was pretty fantastic to be part of. The best thing for me was actually not really about sailing, but just about meeting people and discovering a new country. Everyone was so kind to us – it was just incredible.’

As for the main event, suffice to say the eight-strong fleet provided a representative cross-section of the teams found on the Tour Voile. Valentin Bellet-skippered Beijaflore to the top spot, the same team that took third in last year’s French event. Defending champion Thierry Douillard spent the regatta locked in a running battle with his erstwhile Tour Voile teammate, British Olympian Stevie Morrison, the two each leading competing Oman Sail crews, with Douillard’s EFG Bank Monaco taking second place ahead of Morrison’s Averda.

Main picture: A great sailboat… an amazing backdrop. By switching to the Diam 24 trimaran and mirroring the Tour de France à la Voile format EFG Sailing Arabia – The Tour has not only made itself into a very pacy and competitive regatta in its own right but also offers a difficult to refuse warm-up (literally…) for international crews aiming for the Tour Voile itself. Expect the level of competition at this well-managed event to grow very quickly from here on

Tour veteran renowned Pierre Mas, who coached the triumphant Beijaflore team, also clearly enjoyed the trip… ‘We came to Oman with a team that looked as much as possible like the one we will have during the Tour Voile. We are all used to sailing in the conditions we will have in France, but the good thing about EFG Sailing Arabia – The Tour was that we had to discover new things, build a team and be sure it performs well in all circumstances.

‘Now this event has to make an impact in Europe and find sponsors – there is great potential here for corporate hospitality. The country is absolutely beautiful and we passed through some incredible places.’

Pouligny agreed: ‘It was a late call to organise this new format but all the teams were really happy. The main benefits of this event are the same for us as all the other teams, getting hours on the boat in the middle of winter when it is hard and cold to train in Europe.

‘I discussed it with the other skippers and the feeling was that it is very, very similar to the Tour Voile. Maybe the intensity of the Tour Voile is higher because you travel the same day as you finish racing – here there is a travel day between racing. But maybe some more travel days would be good on the Tour Voile!’

Morrison is another who embraces both the many similarities with the Tour Voile while appreciating the differences that have made EFG Sailing Arabia – The Tour such a unique experience. ‘I love what they are doing with EFG Sailing Arabia – The Tour but I would prefer it if the two stayed unique in their own way,’ he said. ‘I actually like the fact that it is a bit different, experiencing a different culture in Oman and enjoying it.

‘That said, the change in format with the Diam 24s means that it is now very similar, which is cool as the Tour Voile calls on a lot of skills that are nothing to do with sailing. They are logistics, they are packing, they are working as a team, and this was a good opportunity to practise those early in the year.

‘SATT is a bit easier as we get more days off, which for us older guys is quite nice… It gives us time to think! There is also a lot of camaraderie between the teams. And it was nice to have the Omani culture with the French, Swiss and the English all mixing together – it was a really nice experience.

‘Of course, if northern France can deliver the same weather this summer as we had in the south of Oman that would also be great…’