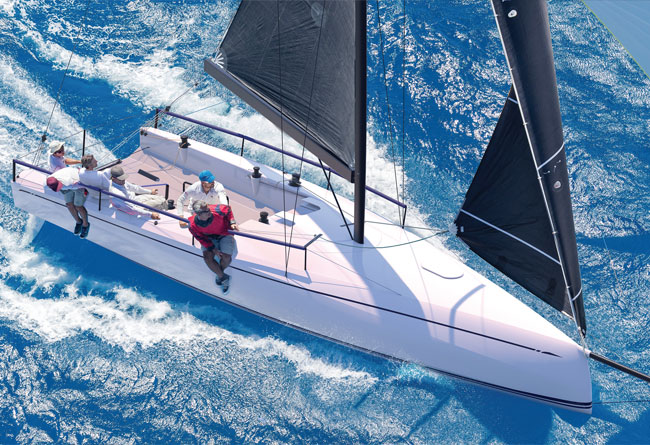 The ClubSwan 50 is already a great success: fast, even in performance and super-modern at the dock. Now there is the ClubSwan 36 – less a baby sister than a (very) cheeky agent provocateur… a remarkable successor to the iconic and beautiful Swan 36 that in 1967 started the whole ball rolling

The Nations Trophy 2019 was always going to be spectacular anyway. By day there will be thrilling boat-for-boat action on the Bay of Palma, with lead changes at every mark as the world’s best in three ClubSwan one-design classes square up for the title of World Champion. By night the similarly invigorating and equally exclusive social side of the ClubSwan lifestyle spins elegantly into motion. All in all it’s quite the affair… only this time it’s going to be even more spectacular because ClubSwan are introducing a fifth one-design class: the ClubSwan 36.

To blend the trimming alchemy of traditional dinghies and keelboats with the exhilaration of modern foiling concepts Nautor’s Swan have collaborated once more with Juan Kouyoumdjian on the new entry-level sportsboat, the ClubSwan 36.

With the Juan K-designed ClubSwan 50 voted European Yacht of the Year 2018 in the Performance Cruiser category and winner of the US Sailing World prize for the best one-design launched in 2016 (and currently thriving with over 25 boats sold), why introduce another class quite so soon?

The answer is two-fold, as ClubSwan’s product line leader Philippe Oulhen explains: ‘We learned from the ClubSwan regattas in Porto Cervo, the BVI and now the Nations Trophy League that there is high demand for this kind of regatta. There is still strong support for the ClubSwan 42 and Swan 45, which is why Nautor’s Swan took over the management of both classes as well as the ClubSwan 50. From organising the racing to taking care of the owners, all that in-house expertise is already in place to deliver exceptional events to ClubSwan owners. That’s one of the reasons for creating this new ClubSwan 36.’

The second reason, which came from the very top of the Nautor’s Swan group, involved thinking about what ClubSwan’s future generations will want. ‘The challenge from CEO Leonardo Ferragamo,’ continues Philippe, ‘was to keep going in the direction of travel started with the ClubSwan 50, and to bring newcomers into the ClubSwan family who are looking for a very simple way to race.

‘At the Swan events, with the ClubSwan 42 [48 units produced], the ClubSwan 45 [52 units produced] and the new ClubSwan 50s [23 produced], we heard owners asking for a genuine inshore boat, with no interior at all, less sails and crew involved. It is not “another sportsboat”, because it brings this forward thinking to enable the designs to evolve, while keeping the Swan’s DNA: quality, attention to details and style.’

According to Philippe, the thinking behind it was to look for a boat of the future. ‘If you look at smaller boats there are three broad categories. One is classics like the 6m, Star, Dragon and so on – all of which are going very well today; they carry the sailing history and are still very high level. Then you have the more conventional sportsboats, of which there are a lot; their evolution came mainly from improvements in materials, especially with carbon and sandwich hull construction, making it possible to make lighter boats.

‘At the other end of the spectrum you have more modern boats, with moving appendages and high sail area/displacement ratio. I call these the conceptual boats. The Imoca 60 brings a lot to this category, and the ClubSwan 36 belongs more to this side.

It has the flush deck, open cockpit and retractable bowsprit one might expect of a sportsboat, but the chamfered bow, to lower CG and cut aero drag and weight, says ‘no compromise’ and the transverse sliding C-foil, pioneered by JYD for the ClubSwan 125, offers side force and lift in varying degrees depending on your angle of heel.

Above it all stands a ‘highly adjustable’ carbon rig that offers the crew myriad opportunities for tweaking, well-known to sailors of more classic keelboats. It’s back to the future.

At a glance the stand-out feature is, of course, the foil. C-foils have been around for a long time… remember the ORMA 60s? On the ClubSwan 36 the innovation is to have a symmetrical foil in a trunk, which is less intrusive inside. It’s an interesting feature. And this is a light boat, less than 2.6 tons – it’s going to be very fast downwind. Upwind the foil creates mainly side force very efficiently, so the keel fin is just a bulb holder, inducing minimal drag downwind.

‘You can go upwind in high mode,’ Philippe explains, ‘which means less heel, sailing slower and higher with more side force compared with lift from the board. Or you can choose a lower mode, heeling more and trading some side force for lift. There is a big change in the lift component between 14° and 21° of heel, and that’s for the skipper and crew to decide, as they learn the boat in a range of conditions. Some will remember their time on light dinghies such as the 470 and 505.

‘To be fully deployed upwind the foil moves 1.9m during a tack. It will be easy to pull at first, but if you tack quickly the foil will load faster. Speed and power are developed in the system and will be tested with the prototype. Downwind the foil will be central, where it still generates some side force while heeling – it’s definitely a boat that you heel downwind. That works for the twin rudders as well, to get the rudder in line with the water flow. Downwind that means around 10° of heel and upwind around 21-22°, fully powered up, similar to the way we sail the 50,’ Philippe says.

The foil, eye-catching as it undoubtedly is, perhaps isn’t the most interesting aspect of racing the ClubSwan 36, as Philippe explains. ‘There is a lot of thinking behind the rig. Juan is a Star sailor, so is Enrico Chieffi [vice president, Nautor’s Swan], so there were a lot of ideas and discussions that emerged from the philosophy of the Star class.’

With lines, appendages and go-faster toys that make even the most radical new Fast40+ look dull, the new ClubSwan 36 takes this famous Finnish yard into a whole new world of aggressive out-and-out performance yacht racing – while still maintaining the quality that underpins every yacht that Nautor’s Swan launch

Usually on a boat of this size you have two sets of spreaders. This has only one set, to allow the mast more flexibility and a wider range of tuning options. The mast is deckstepped, and pre-bend can be changed with adjustable spreader angle and a simple mast step with a moving transverse pin, forward and aft, to change the behaviour of the mast compression. ‘With such a rig we want wide-range possibilities for trimming, without compromising the safety,’ Philippe explains.

‘You can see this rig as a fusion between dinghies and keelboats. In light air you have a lot of power because you can make the sails deep, but in a breeze you can flatten them to depower a lot. The Star sails in 25kt with no reef, and the reason is the rig; you can flatten and twist the sails. Deflectors are often running free on the runners, but on the 36 they are fixed a little lower, just above the spreaders. So when you take more deflector you keep the mainsail power lower, hold the mast to sag a little to weather and decompress the top of the mast, allowing it to open easily and twisting the mainsail. It’s an interesting mast to play with, and the learning curve will be interesting too. The sailmakers will like the challenge.’

Hull zero, due later this year, will sail as a prototype and all the systems, such as the board control, spinnaker retrieval and, of course, rig tuning will be refined on that platform before full production begins. Nautor’s Swan, Torqeedo and BMW are partners and are developing a zero emission and e-propulsion system, which will be tested on the ClubSwan 36 prototype. The approach is to look at the whole system’s efficiency from the battery to the propeller. A five-blade retractable propeller is already on the drawing table.

In terms of handicap racing, what can we expect? ‘We chose the ClubSwan 42 as a benchmark,’ says Philippe. ‘We took the best ClubSwan 42, which has very good numbers, and we raced it against the 36 in the VPPs. Above 10kt TWS the 36 is as fast or faster in real time and winning in ORC corrected time on a VMG course. In the light, 6-7kt or less, the 42 is a machine and has the advantage only upwind. Above 18kt TWS the 36 will be super-exciting, especially if you are ready to play with more heel and more foil down.

‘In October next year we will have a full fleet of ClubSwan 36 one-design boats racing in the Nations Trophy 2019 in Palma. We have five events in the Med every year, and we will create a circuit for the Baltic. The first boats will go to owners from France, Italy, Sweden, Japan and Spain with a demand from our side to attempt the Nations Trophy.’

There will be minimal electronics included in the package, just boatspeed, depth, GPS and a compass, but no wind data, which is another link with dinghies. The boat will be delivered in her one-design version as a Category 4, but an option is available to upgrade for Category 3 with even the potential to sail double-handed.’

With strong entries expected in Palma for next year’s Nations Trophy, 8-12 October 2019 (sailed as three-boat national teams), and after the success of the ClubSwan 50, prospects for the ClubSwan 36 are already looking bright as potential owners are attracted both by ClubSwan, and by a boat that is, as Philippe points out ‘easy to run logistically’, with just six crew, a four-sail wardrobe (class-limited to one main, two jibs and a kite). ‘It’s just generally a simple package to bring to a regatta and still have a lot of fun on the water,’ he says

The Class will be owner-driver, with a 50/50 ratio between amateur and professional, the best way to keep what the Swan’s owners are asking for: to be able to steer their boat and learn how to push them as much as possible with or against the best sailors.