When trial and error is no longer enough 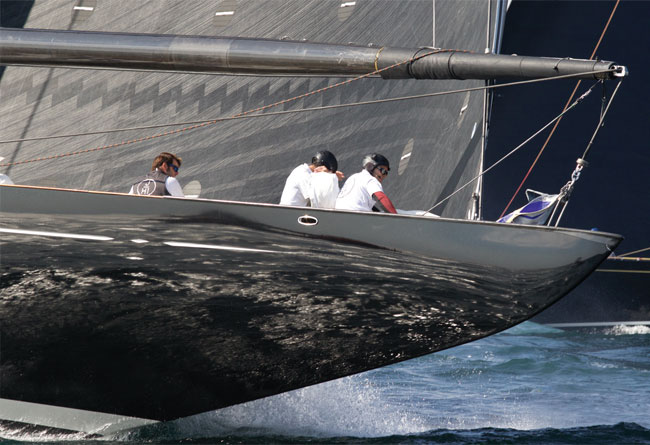 The potential risks and consequences of high-speed foiling are an accelerating topic of debate that is finally making its way into the sport’s wider consciousness. Now speculation needs to be replaced with fact…

Over the past decade high performance boats have become much faster. The pace of development has been meteoric, particularly with the widespread uptake of hydrofoiling. While the popularity of the International Moth took off in the mid-noughties, it took the flying exploits of the AC72 catamarans in the 2013 America’s Cup to really capture the attention of the wider sailing world.

Since then the number of foiling craft has proliferated, from dinghies and small cats up to the likes of Wild Oats XI, which has also dabbled with foils at the Maxi level. Now foils have become de rigueur on the latest generation of Imoca 60s, and so it goes on.

Speed up, reliability down
Breakage is an almost inevitable part of development. As legendary America’s Cup designer Ben Lexcen once said, ‘If it doesn’t break it’s too heavy.’ However, this trial and error approach doesn’t cut much ice with the insurance industry.

Simon Tonks, deputy head of marine at Hiscox, has been insuring raceboats for more than 20 years. ‘At Hiscox we’re passionate about the sport of sailing and we love to support the latest developments,’ he says. ‘But with these increased speeds come increased risks, not only to the boats, but to the people sailing them and those in the vicinity. When you’ve got MOD70s and other kinds of high-performance boats flying around confined spaces like the Solent, these have safety – and insurance – implications.’

Standard of crews
One aspect that concerns Tonks is the standard of sailing ability. ‘There aren’t that many experienced helmsmen for foiling cats and we get asked for quotes from people who want to buy, say, a highperformance 30ft foiling multihull, and they’ve done some racing on a J/24 or J/122. So they want to go from a boat that does barely 10kt to a foiling multihull capable of 35kt, and with no qualifications or relevant experience.’

To race an M32 catamaran the class requires the sailors to have undergone a licensing course where helmsman and crew learn the basics of handling the boat, the manoeuvres, how to get the mainsail on and off its halyard lock, and so on. While the licensing doesn’t come without a cost, the safety benefits are obvious and it may well end up saving the owner money too, because of the basic, but vital, lessons learnt before they even start racing the boat. Tonks would like to see other classes adopt a similar approach. ‘You wouldn’t expect to see Formula One cars being raced by weekend enthusiasts,’ he says. ‘But that’s effectively what we’re seeing in some parts of the sailing world.’

20 per cent breakage
Aside from risk to crew there’s the reliability of equipment. Tonks says that, in one of the popular offshore racing classes insured by Hiscox, around 20 per cent have broken a mast through carbon failure. It has now reached the point where many insurers won’t even insure the rig. Hiscox still does, but only provided a 100 per cent non-destructive test (NDT) is carried out on the rig. ‘If you’re spending £400-500k on a fully set up offshore racer why wouldn’t you want to go that extra step to get a full history on the rig, with a comprehensive NDT test? But the main reason we ask for NDT is we want to eliminate build fault. Why wouldn’t you want to do that?’

The answer, of course, is money, although as Tonks points out, ‘The cost of an NDT test is generally only 0.5 per cent of the price of the boat. The average price of a full NDT test on a Class40 mast is around £2k plus costs which does not seem much when you balance this against safety considerations and the fact you know that what’s going into the boat is fit for purpose and isn’t going to break mid-ocean.’

One of the specialists Hiscox use for NDT testing is the MTD Group, a Cardiff-based company with a strong background in aerospace. Working in an industry where even the smallest level of failure can’t be tolerated [otherwise aeroplanes would fall out of the sky more regularly], MTD’s business development manager Michelle Clapham tries to find a word that describes the marine industry’s attitude to NDT testing and settles on ‘agricultural’ as a not-too-harsh description. One senses her frustration that the marine industry doesn’t aspire to higher standards.

Despite the proliferation of composite construction, composite craft are more or less unregulated compared with metal hulls, which have to pass certification with one of the classification bodies. MTD’s technical director Colin Thomas says, ‘We’ve been working in aerospace for a long time, especially at the forefront of testing composites. We have tried – and are trying – to apply it to the marine industry, but it has been met with a lot of resistance.

Above: NDT testing on a superyacht mast reveals a potential flaw in the laminate which will need careful monitoring and/or some form of remedial work to ensure it does not develop further. With rigs costing in excess of $1-2million apiece and the risks to the crews onboard, insurers are working hard to ensure that proper testing is no longer regarded as a luxury reserved mainly for grand prix campaigns. Nowhere was constant NDT monitoring more central to operations than at the America’s Cup in Bermuda in 2017 (below)

It was catastrophic accidents in the aviation industry that led to the creation of such a tight regulatory framework today, and it’s likely that it will require a few high-profile fatalities before things change in sailing. The death of four sailors after the keel fell off the 40-footer Cheeki Rafiki caused a few ripples, but whether it will create lasting change remains to be seen, according to MTD’s division director Chris Minton: ‘There was a recommendation from the Marine Accident Investigation Branch (MAIB) after the incident, but it's still not been fully adopted. They put out flyers suggesting regular inspection of critical areas using appropriate NDT and that those carrying out the inspection be suitably competent/qualified.’

Some NDT testing comes down to little more than banging a carbon structure with a hammer and, unsurprisingly, the experts at MTD don’t think that’s good enough. Then again proper NDT testing doesn’t come cheap. Assessing the tube section of a mast costs £800-£2,000, says Clapham. ‘Size, construction, history, access, all have a bearing. A clean structure, ie one with few indications (which are found, mapped and then interrogated for type of “defect”), is much faster than one with many indications. Many indications don’t necessarily mean a bad structure; it comes down to additional factors.’

More deaths needed first?
It took the death of Andrew ‘Bart’ Simpson for the America’s Cup community to start taking NDT seriously, and it was the same in F1 24 years ago. Mike Gascoyne, a keen Class40 sailor who has raced doublehanded in events like the Transat Jacques Vabre and Rolex Fastnet Race alongside the likes of Brian Thompson and Josh Hall, has spent his career in F1 engineering. He has worked at the top of many of the big teams in F1 including McLaren, Sauber, Tyrrell, Jordan and Renault, as well as founding the Caterham F1 Team.

Gascoyne says it wasn’t until that fateful weekend at Imola in 1994, with the death of Roland Ratzenberger in qualifying followed by the death of Ayrton Senna during the race, that the F1 community started to ask hard questions. Gascoyne, who now offers his engineering expertise to the marine and motor racing worlds through his business MGI Consultancy, says the Imola double disaster brought about a change in how the motor racing world learns from every accident and incorporates those findings back into developing the next generation of cars, with safety always at the top of the agenda.

Don’t let the sailors decide
Could we see a similar change in the marine world? Gascoyne is sceptical. ‘We had a very strong governing body in the FIA and that rule change [after Imola] on the grounds of safety was absolutely key to making F1 team do what they should. In Imoca a skipper is always going to go for the thing that will make the boat go faster and hope disaster doesn't happen.

‘In F1 you have very professional teams where the drivers are effectively employees of the teams. In sailing it’s a very different model, where the sailors are the heads of their teams. With all due respect to them, great sailors and athletes as they are, they’re probably not the only people who should be making those decisions [about safety], as they are also driven by performance as a priority. It requires a governing body to create the framework for these changes to happen.

‘World Sailing or some other body should be providing the oversight and this regulatory framework. There should be a technical delegate, someone like Charlie Whiting who's the guy we had in Formula One. He would come into the technical working group and say, “Look, we've got this problem, we've had this accident. And on the grounds of safety I'm going to impose this regulation on you [the teams], unless you all agree to something else.” That forced the teams to do agree on something.

‘In sailing you see masts falling down on a regular basis. So let’s say 40 per cent come down in the Vendée Globe. You could go in and say, “That's unsafe so I'm going to impose a mast load test on every boat before every race – we'll pull it this way with x tonnes of load, sideways with y tonnes.” Should the teams object on the grounds that their rigs would fail, you’d get them to come up with a better regulation that means the rigs would pass.

‘Of course it is not always as simple as that in practice,’ says Gascoyne. But the example of Formula One certainly offers a way forwards for the marine world. Will it happen? Or will it continue to be left to the insurers to be the arbiters of what is and isn’t safe in high-performance sailing?