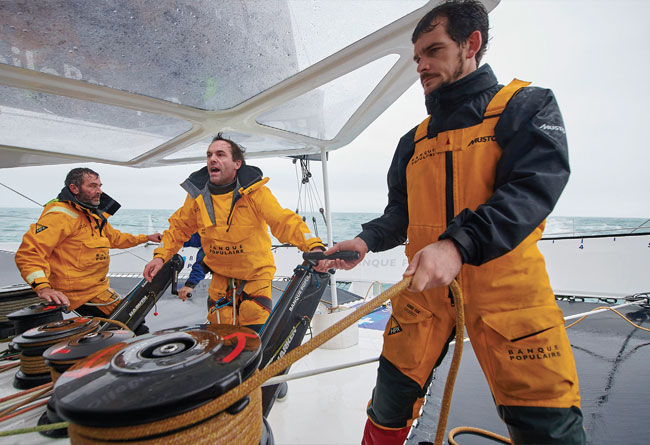 Solo ocean racers trust their lives as well as their results to their autopilots, none more so than the skippers of the new generation of foiling Ultim – where the pilots themselves also face unprecedented new demands

‘Sailing upwind everything feels relaxed and calm, and you’re unaware that you’re doing 23kt,’ says Matt Eeles, B&G’s R&D lead on the Banque Populaire project, ‘but as you bear away onto a reach you really feel the power and acceleration. Your senses are heightened as the full power from the canted wing mast and the sails rapidly accelerates the boat from 20 to 40kt.

‘With the foils raked back and emitting a resonating scream there is no sign of the bows burying. Looking outside the helm position without goggles is nearly impossible as the apparent wind beats you in the face and your eyes hurt as you try to stare at the foils to see all three hulls flying in the air.

‘We frequently saw SOG go into the 40s, peaking at well over 40kt under pilot when fast reaching in 25kt TWS,’ he adds. ‘High averages will be crucial for this project and I can easily see them being able to achieve averages into the high 30s sailing downwind while maintaining a safe and stable platform. After reaching at over 40kt, downwind at 35kt was quite a pleasant ride!’

Main picture: Banque Pop’s unfortunate flip during testing is something most of the big tris seem to go through while the crew find the limits and perfect their emergency sheet release systems. These are enormous, powerful sailing boats, undreamt of even 10 years ago, and every system must work perfectly every time if a solo skipper is not to simply be overwhelmed

Banque Populaire IX (BPIX) is a genuinely awesome sight in full flight. She’s 32m of VPLP-designed Ultim trimaran flying on foils by VPLP/Martin Fisher, and her Vendée Globe-winning skipper, Armel Le Cléac’h, has big plans. Top of his list is the Route du Rhum 2018, followed by a single-handed non-stop race around the world for Ultims starting from Brest on 29 December 2019. For the time being the record for a non-stop, solo circuit is 42d 16h 40m 35s, and belongs to François Gabart and Macif, his 30m non-foiling (for now at least) Ultim, also by VPLP. Foilers, it’s thought, could have a speed advantage of up to five per cent, so when Armel does decide to have a crack at the record he could shave over two days off that time.

‘As BPIX is designed to be handled and sailed shorthanded and, with no support from powered systems, it’s imperative the H5000 pilot maintains control 100 per cent of the time, with no risks of failure or incorrect steering,’ Eeles continues. ‘You need confidence in the pilot to maintain a safe and stable platform that will allow you to work at the bow or mast, sleep and eat, while maintaining speed.’

For Banque Populaire B&G were an easy choice as their record of collaborative success stretches back to the ORMA 60 days, and includes both the 45m monster tri BPV and Armel’s winning Imoca in the Vendée Globe 2016-17. ‘Usually they just fit the B&G gear and go racing,’ Davis adds, ‘but for this project they had unknowns on the boat and for the systems.’

‘The initial meetings were about what they wanted to achieve: safe, fast sailing on a 32m foiling trimaran under autopilot and, in the future, safe solo sailing. The starting point was “does B&G have the equipment, brains and availability of manpower to deliver an instrument system and autopilot that will steer a 32m foiling trimaran?”’

Alan and his R&D team at B&G were confident they could. ‘While the boat is unusual there’s only one element we haven’t done before: a fully foiling boat on autopilot. We’ve worked on a few 60s and 70s that used foil-assisted displacementminimising systems under autopilot so the challenges were more in the detail of implementation. We didn’t have any existing data for this type of boat, so we knew there would be a learning curve, lots of poring over data logs and time on the water.

How much R&D time went into development? ‘There was no hardware customisation,’ Davis replies. ‘These guys use a B&G kit you can buy from any approved dealer – a WTP3 processor-based instrument system with multiple data acquisition modules, H5000 autopilot, H5000 and HV displays, all doubled up for redundancy as no one wants to sail this type of boat without working instruments, and that’s standard for solo racing anyway. The only thing we didn’t supply is a very high-specification compass sensor, which is paramount for heading data along with platform attitude and motion.

‘The pilot is dependent on compass heading for its final steering adjustments,’ says Eeles, ‘so a high-quality fibre optic gyro compass that provides heading and attitude references to the WTP3 CPU and the H5000 pilot is the basis for accurate steering in all sea conditions. Typically, it will provide heading, heel, trim, roll, pitch and yaw angles but, with the boat accelerating dramatically when it lifts up on to the foils, it is important the heading and wind data are not adversely affected by the motion of the boat, causing the pilot to oversteer at high speeds.

‘For the autopilot itself we had to overcome a few issues,’ says Davis. ‘You can’t run a typical auto-tuning routine of repeated +/-10-20° turns on a 32m boat on foils, you simply don’t have that course flexibility. And you can’t do anything under engine because the windage is so high, so we had to go back to the old manual world of fine-tuning one variable at a time. That isn’t custom, but it isn’t something a normal user would generally do when we have nice routines that learn your boat’s response to steering input.’

Without being up close it is hard to grasp just how complex these new Ultim foilers really are. The engineering of the sailing systems, platforms and rigs and foils is beyond anything seen before – including the AC50s, for whom most load cases were entirely predictable. Similarly for the electronic systems, with countless sensors all talking to each other, and to sailing controls and data loggers and to data management programmes, all through many miles of cabling… But at 45kt+ it is only what they see on the ‘dials’ that concerns the sailors onboard – so trust in their equipment must be absolute 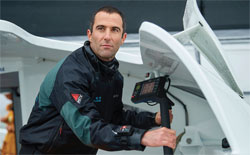 As it turns out, most of the R&D has been focused on customisation of the WTP3 processor, as Davis explains. ‘Users can define their own variables based on existing inputs and calibrate or filter them using in-built routines. They can also write their own code using JavaScript to calculate new variables. We’re here to work with the technical team and performance analyst Clément Duraffourg on the data analysis side, identifying issues with sensors or calculations that don’t work for this boat.

‘One of those was to integrate leeway into our wind measurement solution using really good leeway data from their compass sensor. When the boat starts to fly it slips immediately sideways, effectively producing a huge leeway angle for a very short time – that’s correct data – and this gets integrated into the wind angle – also correct data. But the result is that the autopilot tries to chase a wind angle that spikes maybe 10° for that one second, rapidly adjusting the steering and then correcting back again immediately after. Everything is working correctly but for this boat that isn’t a good result, so we adjusted it to effectively ignore the take-off spike, which made for a more stable, faster platform.’

Much of the tweaking and data-crunching fell to Eeles and his team. ‘When the boat lifts onto the foils the pilot parameters vary dramatically, so tuning the pilot was very much a manual process, starting with some basic settings and then evaluating the performance via data logging before changing any parameters. Tuning the pilot when you hit the 40s was a bit nerve-racking because at some point you have to engage the pilot, hold on and let it do its stuff! We were unsure of how the set-up would handle the high speeds or sudden deceleration, and the slightest oversteer would result in the pilot becoming unstable. But we soon relaxed as we realised the pilot was coping well and the boat was stable at 40kt. The steering was smooth and we maintained an accurate target TWA giving everyone confidence in the instrument and pilot systems.’

‘I expect changes to be continual on this boat,’ says Davis. ‘This isn’t a 50ft cruising yacht where you install the correct system, set it up and go sailing. This is much more of a Formula 1 mentality – test, measure, improve, repeat. I suspect we will see some changes as Armel begins to run solo and finds usability issues.’

Though the skipper plans to tackle the solo circumnavigation before the end of 2019 he’s not sailed solo yet, but BPIX’s ocean legs are being tested, reports Eeles: ‘BPIX recently completed a round trip from Lorient to the Caribbean to understand the performance and handling of the boat offshore. We will be reviewing the data to see where we can improve safety and performance, either through WTP3, pilot settings or new control functions.’

Once in a while they get the chance to pull their heads out of the data and appreciate exactly what they’re doing here. ‘It makes my day to have B&G kit on this boat,’ beams Davis. ‘One of the genuinely satisfying parts of the job is to see awesome boats tear off at silly speeds in absolute control under your autopilot, using data from your instruments, in the first week of sea-trials.’ How can anyone not be pleased by that?