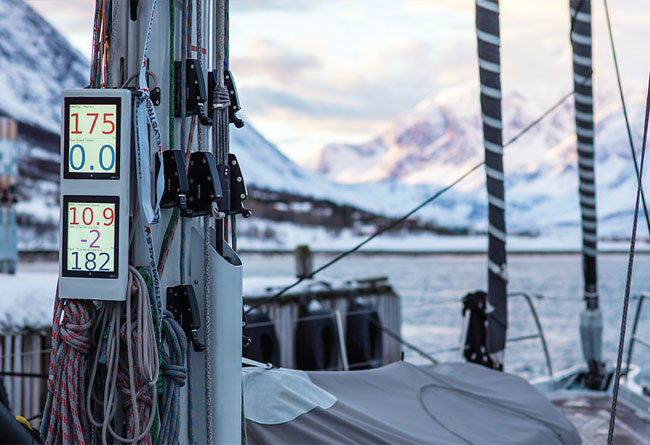 In four short years Sailmon have evolved from ambitious start-up to serious contender and are gaining traction as a go-to solution for processing and displaying data onboard. Right across the sport, from François Gabart (Macif) to Nathan Outteridge (Artemis), key players are using the products in increasing numbers.

Kalle believes the reason for the company’s fast rise is simple: ‘We are born sailors, it’s in our blood and Sailmon is the natural expression of that. We work to help bring sailing into the 21st century and share it with the wider world.’

The company’s mantra – ‘designed by sailors for sailors’ – rings especially true for Kalle. The son of double Olympian Dick Coster, Kalle has won medals at world cups, world and European championships and has held the no1 ranking in the Men’s 470. ‘The only medal we missed out on was an Olympic one, though we came painfully close!

‘Dirk “Cheese” de Ridder told me to learn a second skill. I’ve always been interested in tech so becoming a navigator seemed logical. I quickly realised products out there were difficult to use, hard to calibrate even for full-time sailors. The tech was dated and clunky and there were no off-the-shelf solutions for dinghies, coach boats and sportboats.

‘In 2014 we saw an opportunity to not only challenge but beat the players who have dominated the market for far too long. I’m inspired by SpaceX, Tesla, Strava and Apple, so I knew it could be done better, made easier and more accessible.’

Kalle has many business idols and, when setting up Sailmon, he had in mind the words of Steve Jobs: ‘Build a great team. A handful of AAA people can create big things.’ So now Richard Kent manages the customer service, Enno Romkema who brings 30 years of experience leads the development team of four and Kalle’s sister Kim runs the firm as CEO. Serial entrepreneur Peter Houtzagers is non-executive director and has provided the bulk of the company’s funding to date.

Main picture: it’s a long way north to go to confirm the readability of onboard instrument displays in unusual light – but if a job’s worth doing… These Sailmon displays on the Oyster 885 cruising yacht Firebird remain crisp, crystal clear and bright in full sunlight, even when viewed through polarised sunglasses. The nonreflective screens give a ‘soft light’ display which minimises damage to night vision even on the blackest of nights. All the graphics are 100 per cent customisable. Very neat and tidy onboard processor (below) 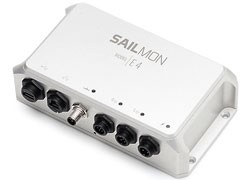 ‘Our true eureka moment was when we realised we could make the user interface far easier while taking over control of all sailing data, calibration and third-party displays,’ said Kalle.

And so what started as multi- purpose displays, milled out of blocks of aluminium and marinegrade anodised, quickly evolved into industrial-quality, waterproof, optically bonded displays driven by the Sailmon E4 processor. The E4 is the mind of any onboard system. It integrates with Expedition software, is easily set up using the NavDesk app on a smart device and is third-party compatible.

In four years the company has smashed the sailboat data status quo by understanding the market, delivering real innovation, sticking to clear business principles and drawing inspiration from a handful of disruptor heroes. So what’s next?

‘The most exciting product we’re working on is an online platform for viewing, logging and replaying sailing performance data, as well as content shared from boats. Another cool product is an app that will convert any smartphone into a pocket E4 processor, allowing every sailor, in dinghies to superyachts, to have some form of telemetry and wind angles on their boat. After sailing they will be able to look at this data and analyse their trip or race. It will have all available data in the interface photos and videos taken during the trip. Once this is done the opportunities for this platform are endless.

‘Then there are the E4 Black and White processors. The White, with its lower price, fewer ports (just Ethernet and NMEA2000), cloud functionality and data gathering, is perfect for smaller boats, cruisers and weekend warriors.

‘The E4 Black is geared towards superyachts and racing yachts. It features external channels and our “parallel universe” platform, which allows all our processors to record raw sensor data. This raw data can then be played back to the processor, for it to be recalibrated, creating new “cooked data” that can be compared with existing cooked data. This allows people to gather data across wind ranges and send it to a professional calibrator who will then send back a calibration file. Eventually we aim to automate this.

‘In 10 years’ time sailing will have changed. On the sport side there will be a lot of fast foiling boats and these will want to look at key variables. Tech firms like Apple and Samsung will have waterproof, sunlight-readable smart devices. AR will be widely used for navigation and mark finding and VR for debriefing and following boats live.’

It’s been said that the big fish eat the little ones, but in the case of Sailmon the opposite might yet prove to be true…