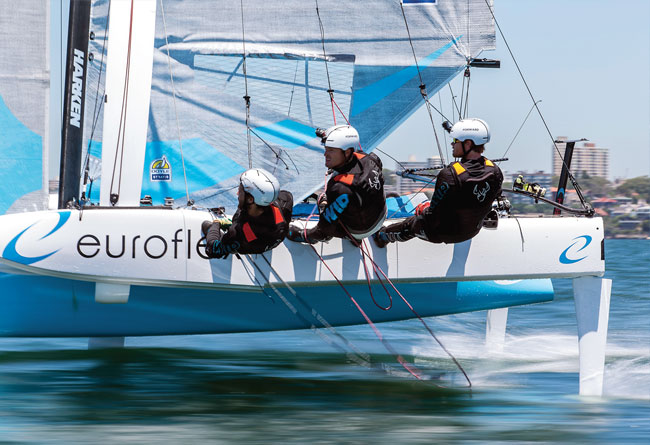 When the creator of the original televised grand prix skiff series Bill Macartney went looking for a new game he told his ‘creative partners’ Morrelli & Melvin to give him a big set of foils, a powerful rig… and only then some trick hulls to float it all

Everything about the new SuperFoiler racing circuit in Australia is about adrenaline-fuelled speed – and that applies as much to the design and technical development of the equipment as to pace around the course. For the Doyle Sails team tasked with producing the horsepower for these high-octane foiling trimarans the challenge was irresistible, despite the tight timeframes for designing, developing and delivering fast one-design sails for the fleet.

The SuperFoiler circuit is the brainchild of Australian father and son duo, Bill and Jack Macartney, and aims to take over the mantle of the highly successful 18ft skiff grand prix circus, which Bill Macartney pioneered. They commissioned designers Morrelli & Melvin to come up with a supercharged small foiler, sailed by three people all on trapeze, with a brief to perform in 5-25kt. The result is a hot rod, demanding to sail but capable of speeds up to 40kt. ‘The closest thing to these boats are the America’s Cup foiling multihulls,’ says Pete Melvin. Measuring 7.9m long by 5.1m wide, with a 12.5m mast and 33m2 sail area, they are highly technical with a mass of control systems to master.

‘The power-to-weight ratio is very high, with a 5m beam and weighing only 250kg,’ says Melvin. ‘Most other boats of comparable size are two to three times heavier.’

To bring the concept to reality Doyle joined forces with Innovation Composites, who built the platforms, and Hall Spars, who supplied the rigs and foils. Doyle CEO Mike Sanderson embraced the concept, describing it as ‘the next level of excitement above the 18-footers and a whole new world’.

Says the loft’s design chief Richard Bouzaid: ‘We started the design work about 18 months ago when the idea of the SuperFoiler circuit got off the ground. We started with an investigation of the relationship between the rig and sails and did a lot of simulation work in that area.’

Main picture: working with Morrelli & Melvin and Bill and Jack Macartney to produce the horsepower for the group’s new SuperFoiler was about a great deal more than accurate and well engineered sailmaking. There is little conventional – either above or below the ‘deck’

Developing foiling sails was not an entirely unknown area for the Doyle team. They purchased one of the 10m foiling catamarans used as testbeds for Emirates Team New Zealand’s 2013 America’s Cup programme and have been regular campaigners against a group of similar-sized foiling multihulls on Auckland’s Waitemata Harbour. ‘Some of the research and development work we did on that boat was of value in this exercise as well,’ says Bouzaid.

When the first prototype came out the Macartneys invited a group of top sailors, including Glenn Ashby, Jimmy Spithill, Nathan Outteridge and others, to put the boat through its paces.

Andrew Brown, Doyle’s one-design specialist and an Olympic sailor and coach, attended the trial along with designer Paul Stubbs. Brown is no stranger to foiling, but says his initial trial sail on the SuperFoiler was a revelation. ‘They are fun to watch but terrifying to sail,’ he laughs.

Their first observation was how highly loaded these boats became as the triallists cranked down hard. Trimming the mainsheet is very physical and requires a powerful 90kg-type athlete to handle the loads. Right through the structure of the boat the power generated was exerting eye-opening loads. A dramatic near-pitchpole occurred on the first day of testing when the line holding the leeward board down slid casually but relentlessly through a jam cleat rated at 800kg, as if it didn’t exist. The board shot up, the boat plunged off the foil and went down the mine, catapulting the three trapezes round the front of the mast and leaving everybody shaken and bruised.

Clearly taming the beast was not going to be easy, but nobody was asking for a reduction in horsepower, only for ways to harness it. As Pete Melvin observed drily, getting to grips with control issues was going to ‘require a very special skillset that will take some time to develop’.

For the sailmakers the result of that first testing session was to refine the design, mainly by juggling the distribution of sail area. Says Stubbs: ‘The principal driving power comes from the mainsail, so we made that a little bigger and the jibs a little smaller for better balance.’

The mainsail sets within a wishbone boom. The profile is a very high-aspect rectangular shape, as like a wing as a conventional soft sail can get. As the project developed further refinement went into matching mast shape and luff curves for maximum efficiency.

As with any foiling boat, the key is to get up and fly as quickly as possible. That is a function of trim and technique that demands initial high power from the sails to deliver maximum acceleration and then a quick adjustment to flatten out and reduce drag as the apparent wind rapidly moves forward.

Cunningham trim plays a large role in that shape transition and again the loads involved were considerable, requiring the cunningham purchase to be increased from 16:1 to 64:1.

In keeping with the cutting-edge nature of the exercise, the sails utilise Doyle’s high-tech Stratis technology with a combination of carbon and Technora fibres. ‘At the kind of speeds we are talking about it is vital to have a very stable membrane,’ says Bouzaid. ‘The demands on a pretty small piece of highly loaded cloth are extreme. It is well beyond the mainstream.’ Those qualities saw Stratis material also utilised for the trampolines between the hulls, relying on the stability of Stratis to add structural stiffness to the hull platform. 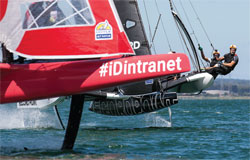 In the 90s Bill Macartney invented and operated the 18-Foot Skiff Skiff Grand Prix, which set the new benchmark for televised sailing. Few comparable circuits ever matched the presentation of that series and fewer still got anywhere near the level of interest from the non-sailing public. The same team’s SuperFoiler picks up where the skiffs left off, taking a very current route to generating all the drama. Meanwhile, the 18-footers calmed down a (little) bit with a switch to one-design from the virtually unlimited monsters of that grand prix era… 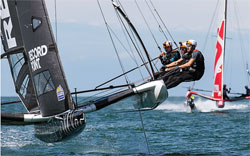 With the launch of the SuperFoiler grand prix circuit fast approaching, the time for refinement and development was very constrained and all the technical partners were under pressure to deliver. ‘With a new project like this the challenge is always in making sure all the elements develop in harmony,’ says Bouzaid. Initially the information comes together slowly as individual partners work on refining their own area. But, as each part affects the other, it all has to work together in the end and inevitably time quickly compresses against the deadline.

In this instance the progression was incredibly fast. The testing of the prototype took place in August 2017 and six completed identical boats had to be delivered in time for the first event of the five-stop summer circuit in Australia in February 2018 – with a line-up of talented professional teams, a TV broadcast schedule and widely dispersed venues all ready to go.

Initially the idea was that the boats would have a light-air rig and a moderate to heavy-air rig, but that was changed to a single rig with two sets of sails. That decision was only made in January, so the Doyle team had less than a month to produce two sets of race sails, plus practice sails for six teams. ‘The guys on the production floor love a challenge like this,’ says Andrew Brown. ‘Working on an entirely new, cutting-edge project of this nature is exciting for everybody involved.’

Excitement is what the SuperFoiler concept is all about, promoting the new grand prix circuit as fast and furious racing involving ‘the best flying sailors in the business’. Not surprisingly, the so-called dream team of Glenn Ashby, Nathan Outteridge and Iain Jensen, fresh out of America’s Cup campaigns in San Francisco and Bermuda, showed a clean pair of heels around the course, winning 21 straight races, before fellow Cup campaigner Paul Campbell-James (Luna Rossa 2013, BAR 2017) broke their winning streak.

But the others are learning fast and the gap is closing. Foiling gybes are making an appearance and as the skill levels climb foiling tacks look tantalisingly close.

‘The crazy thing, ‘says Bouzaid, ‘is that all those loads that took us a bit by surprise when we had those top-gun sailors pushing the prototype so hard during the testing sessions, they’ve all gone out of the window. As soon as the racing started we saw a whole new dimension of loads, much higher than anything we saw in testing.’

Clearly the development path has some way to run… while the boats themselves will only get faster.