The genie’s out the bottle 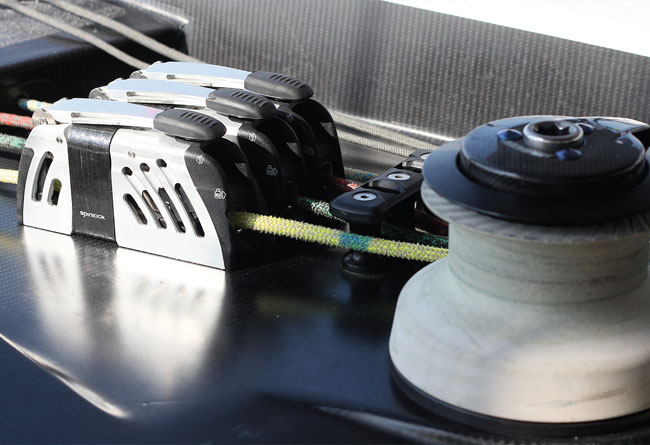 A system is only as strong as its weakest point. It’s a universal truth that applies to many things in life, and certainly to the world of rope holding. A racing team that’s always looking to make performance gains, by upgrading sails, spars or rigging or rope-holding equipment, should also bear in mind that as each of these modifications stiffen the system, so the peak dynamic loads on the line increase. Something has to give, unless you take the necessary precautions.

Balancing act
When considering rope holding, it’s vital you look at both halves of the equation, because the grip on a rope is dependent in equal measure on the characteristics of the gripping surface and the surface being gripped. In the design and development of jammers and clutches you also need to make your assessments in the context of rope manufacturers’ continued development of fibre and braiding technologies.

Good partnerships with the rope manufacturers are critical to Spinlock being able to develop the best possible rope-holding products, as head of the Special Projects Team, Charlie Carter explains: ‘Spinlock enjoy close relations with all the major rope manufacturers to make sure the two fields develop in sympathy with one another, the objective being that the customer is able to hold the load he needs, on the line he chooses.

‘Every competitive sailor understands the need for reducing weight and windage aloft; so as we see strength and stiffness improvements in rope fibres we also see rope diameters becoming smaller and smaller. This means that trying to develop the best possible rope-holding equipment, the goalposts are always moving.’

Tougher challenge
Load-holding performance is dependent on a number of factors, both in rope and hardware. According to Carter, the key factors for the hardware are the pressure exerted on the rope and the area over which it is exerted, coupled with the friction generated by the gripping surface. ‘The mechanism determines the force, the profile and section of the cam or jaw affecting the area of contact and consequently the pressure, and the grip pattern and surface texture govern the friction.’ These factors are also affected by the rope’s characteristics. Fibre material, braid pattern and tightness and thickness of the cover relative to the core affect the coefficient of friction, the cover stretch and section form stability under load and under compression (change in the shape of the line and consequentially the contact area) and the transfer of load from cover to core. Fibre blends in ropes are chosen to suit the different applications; durability, strength, stretch, creep, water absorption and heat resistance are important criteria to be considered alongside rope-holding performance, so ropeholding technology has developed to meet the compromise.

Main picture: the XX0812 Powerclutch, these three examples are mounted on a new TP52. Maximum safe holding load is 2,350kg on a tiny footprint, and with the ability to release fully under load with minimal line wear. Ceramic coated jaws, all titanium parts and a machined body offer massive holding in a compact body. The lines are led through a TSR20 High Load Diverter, again in full titanium as are all of the fastenings

Theory and reality
Recent years have seen project managers, riggers and race teams develop a much greater understanding of the particular requirements of each rope-holding application on a raceboat. ‘Talking to sailors and teams is critical,’ says Carter.

‘Understanding how they actually use rope-holding technology in the heat of battle, as opposed to the way we might think they use it, is crucial. For example, “clutching” onto a line that has already been wound to high tension on a winch can produce different results from the ultimate load-holding achieved by gripping an untensioned line and loading from the sail.’

When you’re trying to decide which product to buy it’s easy to focus on a couple of obvious ‘headline’ specs such as maximum working load (MWL) for a given diameter and the weight of the product. Other less obvious ones to consider are:

Carter takes the example of overload design. ‘At Spinlock we have been very careful to design the mode of failure when MWL is exceeded. It is often better for slip to be the mode of failure, as this is much less likely to cause serious damage elsewhere onboard, or indeed to the rope itself, which can often be a significantly higher cost to replace than consumable components.

‘Spinlock product design reflects this, and it’s one example of why choosing a product on the bare headline details on the specifications is not necessarily going to give you the best answer.’

Ceramic advantage
One of the biggest leaps forward in rope-holding technology has been the introduction by Spinlock of a ceramic finish similar to the Keronite found on AC boat winches, which appeared first in the XXC model designed originally for the Volvo Open 70 Groupama, winner of the Volvo Ocean Race 2011-12. The coating can now be found as an option on nearly all models in the Spinlock range from the high-load jammers holding enormous loads on superyachts, right down to the trusted XTS on 30ft+ production boats. And the technology isn’t just for the production boat optimising for racing – X-Yachts are an example of where the ceramic technology is being implemented by the builder to reflect the changing market demands for better performing lines.

The story of ceramic in the Spinlock range is a good example of the tandem development of ropeholding technology alongside rope fibre innovation. While the ceramic option won’t necessarily improve the maximum load holding overall, it does enable the hardware to reach its full potential when using hybrid rope coverings containing Vectran, Technora, Kevlar and PBO.

Below: the side-mounted XCS0610 clutch has been carefully optimised for small diameter lines with ceramic cam and base for improved performance – including reduced line wear – particularly when using the latest lightweight cordage. Compared to its successful predecessor safe working loads are up by around 15 per cent as a result of the latest refinements. The now fully machined body of the XCS clutch has also allowed a useful reduction in weight. The clutch seen here is used to manage fast-moving asymmetric sheets onboard a Fast40+

‘The material properties of these fibres make them harder to grip,’ says Carter. ‘So to achieve the maximum working load, ceramic components which have a rougher surface texture provide a higher friction coefficient to counter the fibres’ slipperiness. The ceramic coating is more aggressive, but the tougher hybrid fibres are more resistant to damage and are therefore suitably matched.’

Any other business…
We should give a brief mention to textile clutches. Chinese finger traps and cable-pulling technology have existed for a long time and ‘soft-grip’ jammers have long been in the crosshairs of the Spinlock R&D team.

With sailors better informed about the functional characteristics of different types of rope-holding devices, there is now a place for this product in specific applications on specific boats. Although there are some clear differences in taste and opinion, some sailors enjoy positive mechanical control of lines, and the diverse demands on ropeholding equipment are becoming better understood across the industry.

A ‘special’ service
It’s really important to understand how the equipment is used in each specific application onboard, and which combination of equipment and type of rope will yield the best results. This is where the Spinlock Special Projects Team come in. Because they work with so many high-level campaigns across all aspects of the sport, they are the experts in understanding the subtle differences in demands, and work with the top teams to develop product variations, the most successful of which make it into the wider Spinlock range.

The company has long prided itself on the easy serviceability and worldwide availability of Spinlock parts, two of the reasons why Spinlock were selected as a partner for the Volvo Ocean Race. The Volvo Ocean 65 has enjoyed using ceramics for high load-holding in the last two editions, and for the current edition all of the mid and low load-holding has switched over to ceramics in the refits carried out by The Boatyard. In the 2014-15 edition the entire fleet completed the circumnavigation with almost no replacement of Spinlock hardware. Volvo Ocean Race competitors are possibly the most demanding R&D testers in the professional sailing world, yet the equipment outperformed all reasonable expectations.