If one considers all that's been said and written about Mr Peyron's paramount role in the making of modern ocean-racing high-performance multihulls, his nomination as new skipper of the mighty Banque Populaire 5 is nothing but a natural, expected, karmic event. And, of course, there is the Cup as well... a catch-up with the man only seems appropriate.

Taking the helm of the 40m trimaran after Pascal Bidégorry's 'departure', the La Baule skipper first has his sights set on the Jules Verne Trophy, an objective the boat's backers were frustrated not to get closer to last winter - considering the monster's potential, demonstrated in 2009 with a 32.94kt average speed on her record-breaking Atlantic crossing.

Groupama 3's benchmark time of 48d 7h around the world is certainly well within reach. Yet it is the nature of the Jules Verne beast to be elusive, with so many variables at play... gear failure being high on the list, as Loïck himself knows all too well. He's moved on since, bagging a victory around the planet with Jean-Pierre Dick in the Barcelona World Race, but the memories of his last Vendée Globe demise are still fresh. 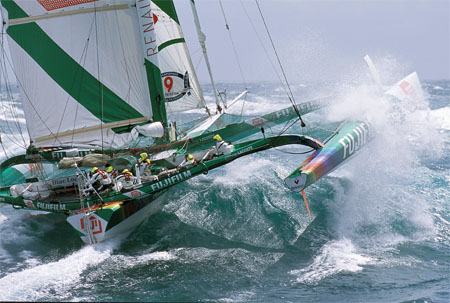