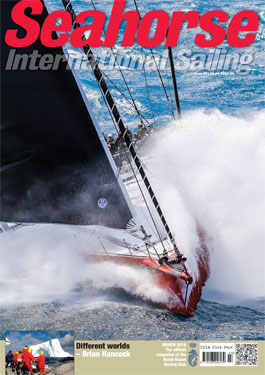 Cold light of day
ROB WEILAND bravely goes where most would fear to tread: the cost of racing a grand prix yacht

Linked by but a thread
The song remains the same… but it’s a very different band playing it. BRIAN HANCOCK

What does it take…
A big picture hunt for the commonalities of a successful Olympian. CAROL CRONIN

Hot stuff (but cool)
A new racer-cruiser emerges one side of the yard, from the other side appears a new carbon Wally

Don’t follow the pack
Australia’s high-performance sailing clothing innovators were never going to do that, were they?

IRC – An end to rule bandits
Convergence should mean just that. JAMES DADD

RORC – Lifeblood
Getting out the youth vote… and the passing of the dragon. EDDIE WARDEN-OWEN

Sailor of the Month
Inspirational is probably the best (only) word