As World Sailing coach working on sailing development and having been involved with the Emerging Nations Program (ENP) for the past three years on two continents, America and Africa, it is easy to see the impact that our programmes are having in transforming the lives of both sailors and coaches.

Main picture: While the First World works to keep its youngsters engaged in the sport it is important to bear in mind the vast pool of potential sailing talent – such as this young Angolan Laser Radial sailor (above) – that relies on programmes like World Sailing’s Emerging Nations Program simply to get afloat.
Below: Felipe Andre is one of thousands of youngsters – many of them talented and all of them enthusiastic – to have now benefited from the ENP, which must surely stand as one of the governing body’s most important and in the long term most influential achievements to date 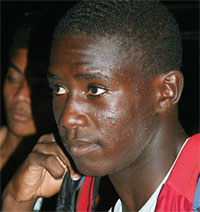 In 2015 I first met Felipe Andre, a young sailor from Angola. A tall, timid teenager who was having his first ever formal coaching classes, learning upwind theory, trimming, sports psychology and boathandling. He was eager to learn and fast on the water, faster than everyone else in the clinic in Maputo, Mozambique.

When I saw him in Langkawi, Malaysia for the Youth Worlds the same year he was thrilled, and knew that without the ENP program he wouldn’t have been able even to participate in such an event. I was excited to see him and work with him again.

It was a great challenge for him competing against the best young sailors in the world. At the end of the championship he finished 40th out of 66th sailors – he was extremely disappointed.

We talked a lot about his preparation and practice routines over the previous seven months. I discovered that Felipe wasn’t able to sail very much at all at home because he didn’t have a boat and so had to borrow one from his club. Nor did he have a coach since his club could not afford one – the coach with him at the clinic was actually a sailing friend who just knew a bit more than he did! He realised that without good training and many more hours on the water it would be very hard to compete at a high level.

At the ENP clinic we talked about goal setting – Felipe’s goal is to represent his country at the 2020 Olympics. He still depends on other people because he does not have his own boat, and is currently sailing with the same old sail he took to Maputo. He attends university each evening and works during the morning to help his family. He sails Wednesday, Thursday and Friday afternoon because it is the only time the boat is available.

I have stayed in contact with many sailors since my first clinic and Felipe is one of them. He tells me that his ENP experience was exceptional – he still has notes and works on drills we taught him over three years ago. He is still Angola’s best Laser Radial sailor and he believes he will be in Tokyo.

Last year we made some modifications to the ENP system. As the World Sailing development department we realised we had to prepare the coaches better – they will always be the key in training the athletes. So we organised our first coach-led clinic, which focused on the coach and preparing him to train his sailors using everything we have learnt elsewhere in our programmes.

This year I met Guatemalan Jose Daniel, who attended our ENP clinic in the Dominican Republic with two of his Laser Radial sailors. Jose is an incredible person, a humble coach with excellent sailing skills; his father works as a mason’s helper, a path he too would have followed if he had not learnt how to sail through the support of the Guatemalan Sailing Federation. He began competing and eventually became a Pan American medallist in the 2015 Toronto Games; his win earned him a grant from his national Olympic committee with which he was able to buy a piece of land and build his own house.

Today Jose works full-time as a sailing coach, teaching children who like him would not otherwise have the opportunity to learn how to sail and discover a great sport.

Many other coaches have been impacted by the ENP programme. All have similar stories, humble people who today work with sailing, transforming lives and ultimately helping their fellow citizens towards their personal goals.

It is difficult for an individual from a developed country, that has all the equipment on tap, great facilities and sailors who don’t have to worry about anything other than going sailing to realise the effort, strength and vigour a coach or sailor from a third world country requires simply to get out on the water.

Each day they deal with problems that might floor better-known athletes. Lack of the basics, like sails, boats, cleats, gloves and so on. Lack of time, equipment and of course the money needed to race and train overseas. Meanwhile, they are often working their way through school to secure the education they know they will need to support their own families… Yet they still maintain a dream of representing their country at big international events.

The World Sailing ENP is promoting a fair game, it is a great opportunity for coaches and sailors who wish to learn what other countries are doing and to improve their own skillset. During the Dominican clinic I met many talented coaches and sailors from difficult backgrounds as well as others who were better resourced.

In the classroom and out on the water the social differences do not matter, we have a single social class… the class of sailing. And they all give their best. It is a great thing to experience.

In one of my own lectures – on goal setting – we always open like this: ‘What am I doing today so that I can become a better sailor tomorrow?’

Properly identified goals guide our programmes on a daily basis, they give us all direction and confidence. Programmes like these bring some ‘light to the end of the tunnel’ for many ambitious but resource-poor sporting nations. It is an honour to play a part.