'If you can dream it, you can do it,’ said Enzo Ferrari. His 125 S, the first car ever to sport the prancing horse, was unleashed from its Maranello stable 70 years ago and soon recorded Ferrari’s first grand prix win. Enzo had never shown any interest in building anything except racing cars, but he dreamed it, and in 1950 he did it, with the 166 Inter, Ferrari’s debut grand tourer. That worked out pretty well.

Comparisons between Ferrari and Persico are obvious: passion, craft, innovation, excellence and a track record of success. They also share vision, the ability to identify a gap in the market and to own it. In the (very) grand touring market the Italian yacht builder is redefining performance superyachting through its collaboration with Wally Yachts, but, as CEO Marcello Persico wryly noted, ‘Not many people are looking for maxis and superyachts.’

In the custom build of a 65-footer Marcello believes he has spotted a new gap in the performance cruising market. He plans to own it with the Felci65.

It started with an Italian owner who wanted a soft weapon: a performance cruiser that would satisfy his competitive instincts racing in the Med, but not so twitchy it needs professional taming. ‘He wants to enjoy his boat with his wife and friends,’ says Marcello. ‘He may hire a few sailors for regattas, but he wants a boat he can run himself, so it needs to be easy to sail.’ The owner likes Umberto Felci as a designer and he wanted Persico as his builder because, as Marcello points out, ‘People come to us when they want a custom boat with the focus on performance.’

Felci’s hull offers the optimal compromise between resistance and form stability for a given displacement, streamlined and powerful with low topsides, and cup-shaped sections for stability at high heel angles and reduced wave resistance at lower angles. ‘To bring to life a boat that’s light and fast, yet comfortable and elegant,’ explains Felci. ‘Blending these features is one of the things we do best. I believe we have created an exclusive yacht for performance sailing yacht lovers,’ he concludes.

‘To bring to life a boat that’s light and fast, yet comfortable and elegant: that was the concept guiding us in our new project,’ says designer Umberto Felci. With the new Felci65 I can confidently say that we have succeeded in creating an exclusive yacht for performance sailing yacht lovers.’ With its comfortable contemporary interior and ultra-light weight, no one is going to be caught out describing the result of Felci’s latest collaboration with Persico Marine as ‘ordinary’. Mouthwatering, yes, ordinary, we think not

During build Marcello’s team determined that there is a market for a luxurious high-performance cruiser with premium materials, at a more affordable price. ‘When we suggested building semi-custom boats based on this design the owner said: “That’s fine with me,” so now we are promoting the project.’

The resulting Felci65 showcases Persico’s expertise. The hull is carbon fibre sandwich, with different densities of foam depending on loading. It was built in a CNC-machined female mould using carbon laminate and a three-step infusion process with rigorously controlled impregnation.

‘It’s not pre-preg but it’s very close,’ Marcello adds. ‘We’re really happy with the results in terms of resin impregnation and weight.’

Add a Hall Spars high-modulus carbon rig with ECsix rigging and it’s so far so normal, for Persico at least, but the project has involved plenty of creative thinking. ‘The challenge for us is finding the right balance,’ adds Marcello. ‘We know from the America’s Cup that above a certain level every kilogram you can save becomes very expensive. Sometimes, even in the AC, it doesn’t make sense and that’s the case even more so in this market.’

Persico’s experience with weight saving for its raceboats was a big plus. Working with Felci and the owner, they devised an interior that optimised use of structure without adding more panels than necessary. ‘But you need an owner who likes this approach, who makes performance one of the priorities, but at the same time it’s not a pure raceboat so you need comfort below,’ Marcello explains.

This balance also involved fitting a lighter and quieter hybrid propulsion system, powered by Li-Ion batteries storing 1,000Ah at 24v DC. Electrical systems are managed by a CAN-bus system, there’s wi-fi throughout and all lighting is LED. ‘We see ourselves as a high-tech company,’ says Marcello, ‘and not only with composites, with comfort too.

‘With the Felci65 there were three equal priorities: performance, comfort and cost. It wasn’t easy, but we think we found the right balance.’ 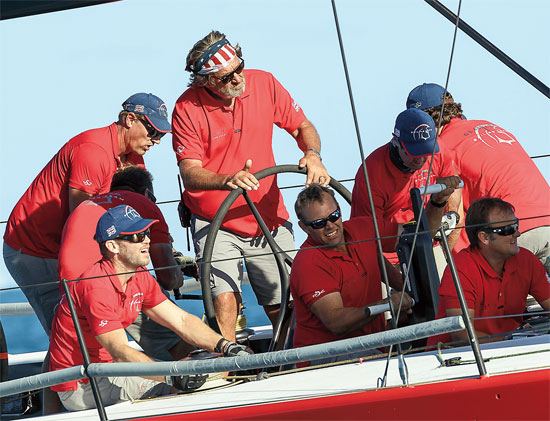 With three new TP52s in build for the 2018 52 Super Series, the Marcelo Botín designs Luna Rossa and Phoenix along with the new Judel-Vrolijk design Provezza, Persico Marine is currently busily engaged raising the bar for the ‘most refined inshore racing yacht class in existence’

Above: Persico’s first TP52, the original Judel-Vrolijk Gladiator, was built in 2015 with a hull sister, Rán, for Niklas Zennstrøm. The next Rán will be a Carkeek Fast40+ while the Gladiator seen here was seriously damaged by a ‘not quite ducking enough’ port tacker at Key West. She was quickly replaced with a new boat while Persico executed the massive rebuild which now looks – and weighs in – just like new

‘All the TP52s are at the pointy end of the design spectrum so finding many small gains is very important,’ says Persico Marine operations manager Mark Somerville.

‘The main challenge is to reduce the part count and parasitic weight in a class that has been around for so long. We have a reputation among industry professionals for doing that particularly effectively, and fortunately our clients are aware of that.

‘Our own TP52 story started in 2015 when we produced Rán and Gladiator, Judel-Vrolijk-designed twins from shared tooling, and they made a big impression,’ Mark adds. ‘With TP52 measurement certificates being freely available, it was clear we had built two of the lightest yachts; anyone who went below found a clean, simplistic interior – not one that needed finishing to look that good, just built to perfection.’

CEO Marcello Persico echoes that challenge and explains why TP52 builds are so important to his company. ‘The TP52 is without doubt the most refined inshore racing yacht in existence today. The class rule has been relatively stable since 2007, and every year naval architects, engineers and builders are challenged to build new boats that are somehow even better than the previous generation. After all this time improvements are hard to come by – and we all work incredibly hard for marginal gains. The work we do with TP52s pushes us to develop solutions that trickle across into our other projects, like our recent Wallycento, Tango, and the upcoming Felci65.’

Persico has a number of advantages when it comes to identifying and delivering the more subtle gains. First is a very strong in-house engineering team, which works directly with naval architects from the moment projects are conceived. ‘We don’t just build from a set of premade established drawings,’ says Mark, ‘we work with the teams, designers and engineers to integrate our knowledge and experience into the yacht. We design the process engineering from tooling to parts and integrate these seamlessly to achieve the most lightweight, simplistic part-to-part mating pieces, no matter what the size.’

As a result of this collaborative approach to structural engineering, more and more of the boats’ systems – from spinnaker takedown drums to hydraulic oil tanks – are incorporated into the main structure as load-bearing elements in order to minimise redundancy.

The second is technological. Persico’s CNC five-axis milling machines can be used to make incredibly accurate moulds, which means less filler and glue is needed to fill joints and imperfections and that results in lighter structures. Its suite of autoclaves allows in-house construction of composite components instead of outsourcing, which ensures the highest quality and enables better leverage of the internal engineering expertise.

The third advantage is simply the size of the operation. Its ability to produce different components simultaneously means large and complex boats can be built very quickly, which means architects and engineers can be given longer to refine their designs. ‘Persico now has vast experience and an outstanding facility,’ says Tobias Kohl of Provezza designer Judel-Vrolijk.

‘Just one example that makes life easier and the boat better is its huge capacity for milling moulded parts. We can get the fin and bulb manufactured there too, as across the Persico Group there is near-legendary experience of precision milling both industrialscale tooling and metal components. That sets it apart.’

A final advantage is the knowledge shared across the group, because marine is just one business unit of Persico, as Mark explains. ‘I really enjoy working with our automotive engineers. We have an enormous number of very talented people and we’re constantly cross-pollinating ideas and developing new processes. These tend to be deployed first in the build of racing yachts, to create an advantage, then we step them on to the next project, whether that’s the Felci65, or even the Wally 145 we are building. This is an incredibly exciting place to work!’