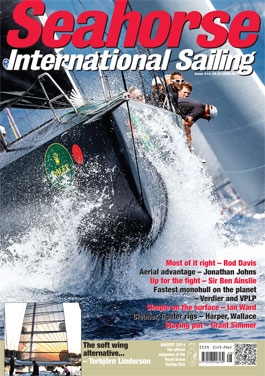 An explosive recovery
The TP52s could be back into the mid-teens next year with at least six new boats. ROB WEILAND

Politics, philosophy and engineering
GEOFF STOCK of Green Marine describes the groundbreaking data gathering tools that will be carried by this year’s Volvo Ocean Race fleet

Fastest (monohull) on the planet?
That will almost certainly be the outcome of JIM CLARK’s New3 project as GUILLAUME VERDIER explains to JOCELYN BLERIOT

Update
TIM JEFFERY stands impressed as SIR BEN AINSLIE unveils his America’s Cup challenge, TERRY HUTCHINSON muses upon the goading by JIMMY SPITHILL of which Emirates Team New Zealand has recently been the victim, IVOR WILKINS reveals that we were nearly in for another Deed of Gift Challenge plus the next High Performance Yacht Design gathering in Auckland

Sailor of the Month
Two worthy – and recent – champions