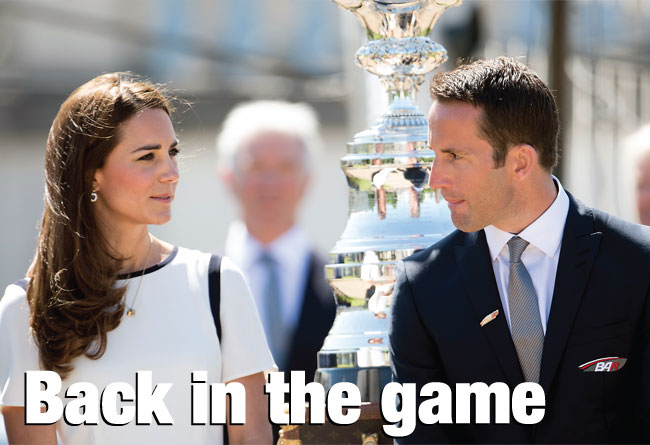 Sir Ben Ainslie and the Duchess of Cambridge found plenty to discuss during the launch of Ainslie’s well-founded – and grounded – America’s Cup challenge. It is a measure of Ainslie’s long-held burning desire to bring the Cup back to Britain that he so effortlessly shrugged off what TIM JEFFREY imagines must have been an almost open-ended offer to stay on for another Cup cycle with Oracle Team USA

Given the British red-top tabloid newspapers regard Ben Ainslie as Britain’s greatest sailor since Nelson, launching his own challenge for the America’s Cup in the auspicious surroundings of Greenwich was entirely appropriate.

Not that symbolism was overplayed. It was a simple, natural fit to talk about the big prize in sailing that has eluded British teams ever since the Victorian ewer was raced for against America and lost way back in 1851.

Greenwich is central to British maritime history. Here Nelson’s bloodied and musket ball-pierced 1805 Admiral’s uniform from Trafalgar is displayed. So too is John Harrison’s first timepiece that eventually solved the problem of establishing longitude at sea by accurate timekeeping. The Cutty Sark, the last and fastest of the tea clippers, is housed nearby. And it was on the steps of the Royal Naval College that Francis Chichester stepped ashore in 1967 to be knighted as the first person to sail solo around the world via the ocean ‘clipper’ route.

Ainslie’s unmatched tally of a silver and four golds has earnt his own place in history. ‘Britain’s greatest Olympian’ is the verdict of Lord Coe, chairman of London 2012. As he announced Ben Ainslie Racing’s America’s Cup project, Ainslie too indulged in one piece of over-the-shoulder reflection, to Carrick Roads, Falmouth, when, as a kid in his Optimist, he watched Chris Law and Co tear-arsing around in the Blue Arrow Challenge 6 and 12-Metres. So the seeds of a burning ambition were born.