Saving the whale (from us) 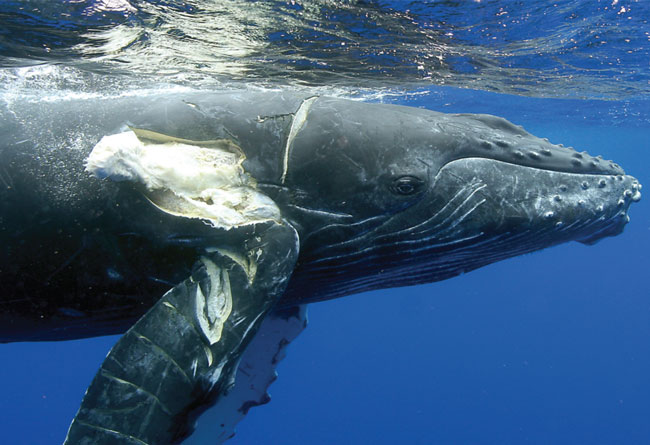 For most offshore sailors the grandeur of seeing wildlife within their marine ecosystems is another big reason to be passionate about this sport. Thousands of species of birds, fish and mammals all play their roles in keeping a healthy and sustainable balance to the ocean’s ecosystems. As sailors we can have a unique role ourselves in helping preserve this balance even as man’s own interactions with the planet present increasing and now more easily identifiable effects that threaten this environment.

Observing large marine mammals in their habitat is simultaneously thrilling yet frightening since the prospect of being close to a moving object that may greatly exceed our size can be disturbing. One hundred and fifty years on from the tale of Moby Dick it’s no less hard to break this primal fear of being sunk from a whale impact. And each year brings more living examples.

One was in May 2012, when video captured Camper helmsman Roberto Bermúdez de Castro throw his VO70 violently up into the wind to narrowly avoid colliding with ‘something huge’ while hurtling along at 20kt. ‘It would have been a bad day for the whale and for us,’ said onboard reporter Hamish Hooper. ‘Fortunately “Chuny’s” decent reflexes saved the both of us from the equivalent of a freight train colliding with a truck.’

Main picture: an injured blue whale tools along gently below the surface off Baja with an injury characteristic of a keel strike – many yachts were racing through the area at the time. Ship strikes are much more likely to prove immediately fatal to ‘our’ largest known mammal but even a relatively minor yacht contact can leave a large whale weakened and unable to feed properly – or evade predators attracted by the blood loss. The chart below was used in the whale protection briefing given to all the competitors in last year’s Atlantic Cup for Class40s 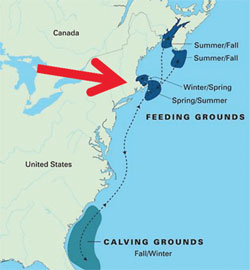 This was not an isolated incident: these events are becoming more numerous. In 2012 Fabian Ritter, ship-strike data co-ordinator with the International Whaling Commission (IWC), published a study showing that over the past 60 years, of the 81 reported collisions and 42 near misses of whales and sailing vessels recorded, the greatest proportion were from more recent years.

Even when organisers take precautions to minimise the risk of mammal contact, accidents still happen, such as the 2016 Imoca Transat from New York to Les Sables d’Olonne. After leaving New York in late May, the solo fleet took care to avoid a right whale exclusion zone off Nantucket. The north Atlantic right whale is a critically endangered species, with only 500 examples left; their leading known cause of death is collisions with vessels in their habitat close to the busy Boston shipping lanes.

However, less than 24 hours into the race, reports were coming in of collisions with unidentified floating objects. First was French skipper Yann Elies, who reported damage to his boat’s daggerboard. Then Armel Le Cléac’h hit an unidentified object and turned around. In the end eight boats reported 15 collisions. Six returned to port and one boat dropped out of the race entirely.

Sailors for the Sea recognises this growing problem within the sailing community. Without change, with sailboats becoming more numerous and faster, the potential for harmful strikes can only increase. A start can be made with establishing some best practices in the planning of an oceanic event:

Damian Foxall, Volvo race winner with Groupama – and a former education manager at the Canadian Wildlife Federation – thinks statistics under-report the problem. ‘One of our roles is to ensure that everyone going afloat is aware of best practices while in the vicinity of marine mammals. In the case of a collision, we have an obligation to report any incident to the coastguard as a safety notice to other mariners, as well as to the IWC ship strike recorders.’

Sailors for the Sea makes a number of recommendations:

An event that already integrates environmental awareness of marine mammals is the Atlantic Cup, a biennial Class40 series that in 2016 also crossed the busy sea lanes off Boston. With the help of presentations to the competitors, but also to spectators and sponsors, this event has earned one of the highest ratings as a Sailors for the Sea Clean Regatta in part for its efforts in making known the plight of the north Atlantic right whale.

Through use of these best practice guidelines, Sailors for the Sea can help every event contribute to the preservation of local ecosystems and our marine heritage both now and for future generations.

Click here for more information on Sailors for the Sea »