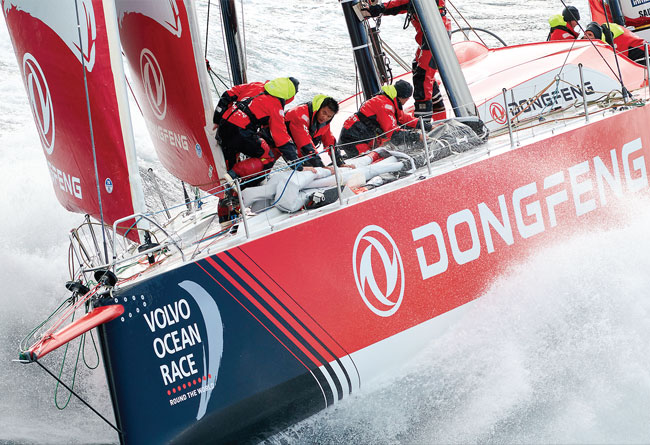 It does seem to be something to which the technical clothing suppliers du jour to round-the-world race and Olympic winners pay scant heed!

The Volvo Ocean Race is fast approaching and this one will see three times more sailing in the Southern Ocean than recent editions of the round-the-world classic. However, the new course still takes the fleet four times across the Equator, so extremes of weather and climate are still very much part of the contest. Demanding on the sailors and very demanding on their clothing...

Main picture: Charles Caudrelier’s Franco- Chinese Volvo entry is one of two this year to now have committed to Zhik foul weather gear (in the last event Zhik gear was being worn discretely by some of the sailors but under the ‘surface’ to avoid sponsor issues). Caudrelier is a past Figaro Race and Volvo winner so this is a potential first big step into the French market for the Australian ‘clothier

This is shaping up to be perhaps the most competitive Volvo Ocean Race yet, because it’s very hard to pick a likely winner from the strong line-up of seven, potentially eight teams. Introducing the one-design element to the last edition of the race made for some of the closest finishes seen in the race. With teams using identical equipment, the focus now is on marginal gains wherever you can find them; one of those key areas is what you wear.

Two crew with a real chance of winning the 2017-18 edition are Team AkzoNobel and Dongfeng Race Team, and they’ve both opted to wear Zhik on their race around the world.

In a relatively short space of time this Australian company has established a fierce reputation for never-ending development, for never settling for the status quo. It all started with sailors like Tom Slingsby, Nathan Outteridge and Iain Jensen, Pete Burling and Blair Tuke, who wanted the best kit they could get their hands on to help them win gold medals at the Olympic Games.

As this younger generation of high-performance sailors has begun to branch out onto the grand prix scene, including Burling and Tuke’s integral part of Emirates Team New Zealand’s victory in Bermuda, so too has Zhik broadened its remit.

Tom Hussey, R&D manager at Zhik, says the toughest test for offshore sailing gear has to be the Volvo. ‘The one-design nature of the boats means there is no hiding away from hard work,’ he says. ‘The sailors are racing the VO65s with the same intensity as in a roundthe- cans race lasting just an hour or two. Except they’re doing it for days and weeks on end, and often within sight of each other because the fleet’s performance is so even.

‘With the boats being short-staffed and so little down-time for the crew, it’s vital that everyone onboard is capable of operating as close as possible to 100 per cent for as long as possible.’

Why Isotak X will make a competitive difference
Following a diligent and lengthy consultation with offshore racing veterans, Hussey says an immense amount of R&D has gone into Zhik’s latest range of offshore garments, Isotak X. ‘It uses the same fabric as the previous Isotak Ocean, but with some significant innovations.’ New features include:

1. Hydrovision hood – Smock, drysuit and jacket. This has been developed to provide a high level of protection while enhancing the sailors’ field of vision. Hydrovision refers to the new hood visor, a rigid clear polycarbonate that provides unprecedented peripheral vision and protection. The visor can be positioned to cover almost the entire face while still allowing the vision necessary for a helm or trimmer to perform to the highest levels. ‘We developed this as a result of the feedback from sailors in the last Volvo Ocean Race, who wanted something to help them cope better with the firehose of water that hits them at high speed in strong wind and big waves. The hood and visor also stows neatly behind the head so it is easily accessed and deployed with one hand,’ says Hussey.

2. Zhik adaptive hood collar system – Smock and drysuit. ‘This is an adaptable collar/zip-on, zip-off hood for the Isotak X Drysuit and Reziseal Smock,’ says Hussey. ‘We had been experimenting with the idea for a couple of years prior to our partnership with AkzoNobel and Dongfeng. The main advantage is that the crews can carry one smock that is adaptable to all the expected conditions. It can be worn with full ocean collar or with various other collar designs and accessories such as Zhik’s waterproof hoods, and the Avlare or Neoprene balaclavas. With conditions capable of varying from one extreme to the other on a single race leg having versatile clothing is a big advantage.’ 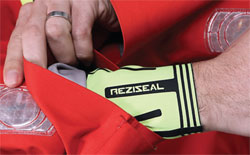 Above: Zhik’s proprietary Reziseal is both more waterproof due to the extended contact area with the skin and also less constricting than the traditional tighter Neoprene drysuit-type seal solution. Zhik continue to make (below) extensive use of the fabric waterproofness testing system they are still refining, working in partnership with the Royal Melbourne Institute of Technology. Coming up with new, lighter and more flexible offshore clothing systems is not the biggest challenge, making them waterproof and, more importantly, waterproof for extended rugged use, that is the hard part and where a smart but practical approach to material and garment testing comes into its own 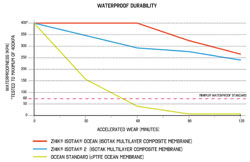 3. Reziseal composite seals – Smock, drysuit and jacket (wrists only on jacket). ‘These are polyurethane and high-stretch textile composite constructed into a soft, stretchable and comfortable waterproof seal,’ says Hussey. ‘They’re worlds apart from the sticky latex seals that wear out and deteriorate so quickly. The textile composite has excellent tear resistance and does not break down, so they also have significantly longer life than latex seals.’ Hussey points out that they are also easier to repair, although the need for repairs are less likely in the first place. The seals provide excellent waterproofness and now with greatly improved comfort.

Hydrostatic head testing is the commonly used method to rate the waterproofness of a fabric. While this method provides a good indication of initial waterproofness before use, it does not indicate how the textile will maintain its waterproofness through its active life. In fact, there is currently no industry standard method that simulates the high levels of wear in wet conditions that is experienced by offshore foul weather gear.

And breathable?
The Holy Grail for offshore garments is to make them waterproof, durable and breathable. Current research confirms that while all of the best-known currently available breathables breathe – to varying degrees – in each case you still sweat when you work hard.

RET is a measurement of resistance to evaporative heat loss, measured using a device called a sweating hotplate. ‘Of the standard industry testing we believe this is now the best method to compare the breathability of waterproof and breathable fabrics,’ says Hussey.

Zhik recently commissioned independently managed RET tests at TTRI Laboratories on numerous offshore breathable fabrics – our own and those of the competition; the tests at TTRI showed that despite the significantly higher durability of Isotak X it reliably matches the best competing products for breathability. This is no mean technical achievement.

Hussey concludes: ‘All Isotak products are configured to have a high level of breathability and very high level of waterproof durability.

‘It’s true that they are slightly less breathable than our Aroshell inshore range, which is optimised for maximum breathability but has slightly lower waterproof durability. But Isotak breathability is in the same RET range as our competitors’ products (6-13) although it offers far greater levels of waterproof durability as these independent tests by RMIT have now shown.’